In Belize, death is a part of life. That doesn’t mean it’s easy. 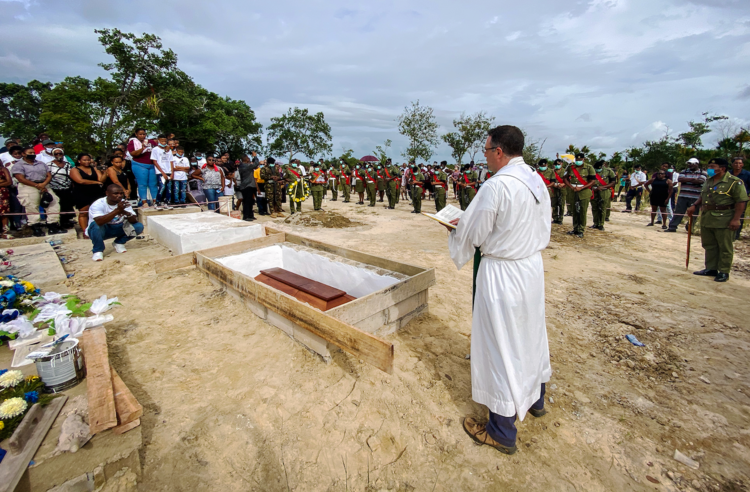 Father Brian is a man of patience, a key quality for the pastor of a busy urban parish in a developing country. In the two years I worked under him, he reprimanded me just once. I was hiking one Saturday morning, soon after my arrival here, when my phone rang. I didn’t answer. It rang twice more. I relented and picked it up. The man said he was an undertaker. He had a body at the church but couldn’t find a priest to bury it. Somehow, the schedule had gotten mixed up or, as is sometimes the case here in Belize, perhaps there was no schedule. Either way, I was on duty that Saturday and meant to be there—not a two-and-a-half drive away. Fortunately, someone located one of our lay ministers, who scrambled to the church and celebrated a service. When I saw Brian that night, he let me know: “People count on us to bury their loved ones. That’s the one thing we can’t mess up.”

St. Martin de Porres Roman Catholic Church is a steady fixture of a lively and beautiful neighborhood in Belize City. They often call the area “Bakka Maatins” (Belizean creole for “in back of St. Martins”) after the parish. Families are sprawling and tight-knit, and neighbors look after one another. But the neighborhood is also poor, controlled by gangs and often violent. That means death is just part of life.

During my first half-decade as a priest, I buried a total of three people. In the next two years here in Belize, that number is well over a hundred. There are big Garifuna funerals with frenetic drumming and singing that practically blow the roof off the church and go on for hours, the sort of celebration you hope might greet your arrival at the heavenly gates. There are funerals for the victims of gang violence—too many of them—where a dozen or more police are stationed in the churchyard to dissuade retaliation from rival gangs and where young mothers of young dead sons interrupt your woefully lame homily with guttural howls of grief until someone subdues them with a drink they call “green thing,” a mix of aniseed, peppermint and I know not what else.

During my first half-decade as a priest, I buried a total of three people. In the last two years here in Belize, that number is well over a hundred.

In the United States, death might be spoken of in hushed voices, clinical and anesthetized. In our neighborhood, it is just part of life. There is less health care here; cancer treatment requires leaving Belize for a hospital in Mexico, Guatemala or the United States, a luxury many parishioners cannot afford. Death is more immediate and unavoidable. That means living is taken for granted less, too.

After one boisterous funeral, the crowd emptied from the church and headed to the cemetery, except for a young man who was a son of the deceased. He was fiddling with something in the trunk of an old car parked in front of the church and, when he spotted me still standing on the church steps, shouted: “Fadda! Kuh yah!” (Father! Come here!) When I got close, I saw several full bottles in the trunk. His father and he had brewed the drink some years prior—a popular local wine made from cashews—precisely for drinking on this funeral day. He poured some in a plastic cup and pressed it into my palm. Just as the drink reached my mouth, a shout came from inside the church, “Fadda, noh drink fronta chuch!” It was Angie, our parish sacristan and receptionist.

“But he offered it to me,” I protested. “I was trying to be polite.”

“Well at least take your priest robes off first,” she shouted back. So I did, and then we drank before heading to the cemetery.

In the United States, death might be spoken of in hushed voices, clinical and anesthetized. In our neighborhood, it is just part of life.

Many of our parishioners enjoy snapping selfies with the mortal remains of their loved ones. From time to time, I open my phone to find a text message like, “My mom died,” accompanied with a close-up photo of the deceased woman’s face or body. Once, I waited nearly half an hour to begin a burial as various sets of children and family members posed with the open casket of a mother who’d died too young of cancer. At first I found this jarring, but I’ve grown to appreciate it. Death is part of life, and you won’t forget it here.

Covid-19 has made things more challenging. We cannot celebrate funerals in the church because social distancing at a Belizean funeral is an oxymoron. You can insist all you want on the government-mandated 10-person limit for religious services, but when the drummers start drumming, the crowd soon follows. A police officer joked with me that to limit Covid’s spread, banning drums at the cemetery is even more important than mandating masks.

Like elsewhere in the world, farewells during Covid feel inadequate. But I find our parishioners surprisingly gracious and accepting. They bring smartphones and stream the graveside services to relatives near and far via Facebook or Zoom. Despite 80 percent humidity and 90-degree heat in direct sunlight, you scarcely hear a complaint about masks (the parish priest excepted).

We had six burials last week—including one in which another Jesuit and I celebrated simultaneous services at two adjacent plots in the same cemetery. At one, a grief-stricken teenager threw himself onto his grandma’s casket with a howl, which caused plywood suspending the casket above the hole to snap. Quick-reflexed bystanders caught it before it could fall. At the other, the young woman eulogizing her 24-year-old brother scarcely missed a beat. The kid had been killed in a police shootout, and his sister implored the world to remember the kind and playful little brother who always made her laugh and not just the one who’d lost his life to gangs and drugs. It was beautiful, these two funerals running unexpectedly alongside each other. No one would go home doubting that a grandma and a brother had loved and been loved.

Death is part of life here, but that doesn’t mean it is easy. And sometimes, the reality of so much death gets to you. The Saturday after the joint burial, it was back to the cemetery to bury a day-old infant, the mother’s firstborn. Between sobs, she gave instructions to the gravedigger to unfold a tiny blue blanket in the tiny hole he’d dug—just so—and place a little blue bib and a stuffed animal in—just so—then gently set the miniature blue casket on top. Just so. I thought of her imagining her soon-to-be newborn child using these precious items as she was purchasing them with a little cash she’d saved. Now they were covered in dirt along with him. I held her tightly as she looked on and cried, trying my best to be strong for her sake.

Driving home, the tears came to me, too. Death is part of life, but there are limits to what we can comprehend. Why a world in which mothers endure such agony? That age-old problem of suffering never goes away and can hit acutely in moments like this.

That evening, I celebrated Mass in the house of another parishioner who’d died nine days earlier. When someone dies, there is a custom that the family gathers nightly for nine nights to pray for their deceased, and sometimes they ask for a Mass on the ninth and final night. Several more than 10 family members and friends had crammed into the small house for this liturgy, but I let the rules slide because all were dutifully wearing their masks. At Communion, I circled the room distributing the Bread of Life to everyone present—except to one woman, who shook her head, “No.”

Afterward, there was a repast of rice and beans and beer during which the woman who’d refused Communion approached me. She was a Mexican dentist who had lived in Belize most of her life. She explained that she was a dear friend of the wife of the deceased, then noted that she had not received Communion. “Yes,” I concurred. She made a grand gesture, encompassing the room, and declared in broken English: “I don’t believe in any of this. This is their faith, not mine.” Then she said: “They are my dearest friends, and I love them. But I love them now.” She paused, and then said more emphatically: “Not later. Now. Now. Now.”

We celebrate All Souls to deepen our trust that not a single act of love we have shared with those we love—and even with strangers and enemies—shall be lost.

I have been thinking about this ever since, about how in some paradoxical way, it often takes acute suffering, death itself even, to understand how extraordinarily precious a gift love is. Only in suffering do we begin to comprehend love’s depth and height and eternalness now. This is what the cross confirms.

There is a passage from Pope Francis’ new encyclical “Fratelli Tutti” that I had somehow skimmed over on the first read but rediscovered this week:

Those who love may be sure that none of their acts of love will be lost, nor any of their acts of sincere concern for others, nor any single act of love for God, nor any generous effort, nor any painful endurance. All of these enfold our world like a vital force.

A mother weeping for her firstborn, a sister for her brother, a skeptical dentist celebrating the Eucharist with a grieving friend. Vital forces enfolding our world. We celebrate All Souls, in good part, to be reminded of love’s eternalness, to deepen our trust that not a single act of love we have shared with those we love—and even with strangers and enemies—shall be lost.

More Stories from America:
– A church in Rome has over 3,000 skeletons on display. They give a chilling—but hopeful—reminder about death
– Families hurt by addiction know exactly the pain (and love) Joe Biden feels for his son, Hunter
– Día de los Muertos is a celebration—even during a pandemic.
– Blessed Carlo Acutis watched ‘Pokémon.’ That’s my kind of saint.