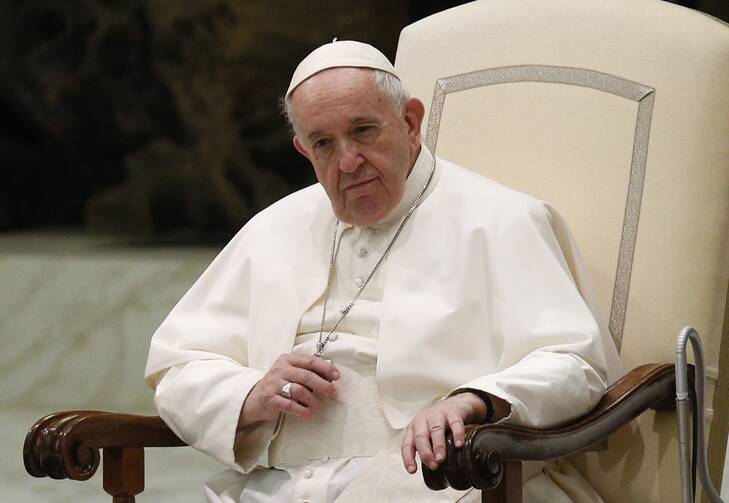 Pope Francis leads his general audience in Paul VI hall at the Vatican Oct. 21, 2020. In a new documentary, Pope Francis expressed openness to the idea of laws recognizing civil unions, including for gay couples, to protect their rights. (CNS photo/Paul Haring)

VATICAN CITY (AP) — Question swirled Thursday about the origins of Pope Francis’ bombshell comments endorsing same-sex civil unions, with all evidence suggesting he made them in a 2019 interview that was never broadcast in its entirety.

The Vatican refused to comment on whether it cut the remarks from its own broadcast or pressured the Mexican broadcaster that conducted the interview to follow suit. And it didn’t respond to questions about why it allowed the comments to be aired now in the documentary “Francesco,” which premiered Wednesday.

In the movie, which was shown at the Rome Film Festival, Francis said gay people have the right to be in a family since they are “children of God.”

“You can’t kick someone out of a family, nor make their life miserable for this,” the pope said. “What we have to have is a civil union law; that way they are legally covered.”

Those comments caused a firestorm, thrilling progressives and alarming conservatives, given official Vatican teaching prohibits any such endorsement of homosexual unions.

Those comments caused a firestorm, thrilling some Catholics while alarming others, given official Vatican teaching prohibits any such endorsement of homosexual unions.

While serving as archbishop of Buenos Aires, Francis endorsed civil unions for gay couples as an alternative to same-sex marriages. However, he had never come out publicly in favor of legal protections for civil unions as pope, and no pontiff before him had, either.

One of Francis' top communications advisers, the Rev. Antonio Spadaro, insisted the pope's comments were old news, saying they were made during a May 2019 interview with Mexican broadcaster Televisa.

“There's nothing new because it's a part of that interview," Spadaro told The Associated Press as he exited the premiere. “It seems strange that you don't remember."

But Televisa didn't air those comments when it broadcast the interview — nor did the Vatican when it put out its recordings of it. The broadcaster has not commented on the intrigue.

The Vatican frequently edits the pope in official transcripts and videos, especially when he speaks on sensitive issues. It wasn't clear if the Vatican also insisted on having the final cut as a condition for the Televisa interview.

What also remains unclear is why the explosive comment was never aired — and if the Vatican forgot that it remained available on a recording in the Vatican archives, which were opened to filmmaker Evgeny Afineevsky.

Televisa has not confirmed that the comments were made during its interview, but the scene of the documentary is identical to the Televisa interview, including the yellow background, a chair in the corner and slightly off-center placement of the chain of Francis' pectoral cross.

The official 2019 Vatican News transcript of that interview, as well as the official Vatican edit, contains no such comment on the need for legal protections for civil unions. The official edit does include his comments on the need for gay people to feel they are part of a family, as he has said previously.

Further muddying the waters is the fact that Afineevsky, when pressed by reporters late Wednesday, insisted the pope made the comments to him directly, through a translator, but declined to say when.

When The Associated Press interviewed Afineevsky on Oct. 14, the director was asked if he realized at the time that Francis’ comments were going to grab headlines.

Afineevsky dodged the question about the origin of the quote and seemed to not appreciate its significance. But he said that he hoped journalists would take more away from the film.

“If journalists will be focusing on this movie only on that, then it will be a pity," he said. "But I think that’s one of the issues that our world needs to understand, that we’re all equal.”

The head of the Vatican communications branch, Paolo Ruffini, refused to speak to reporters who attended an award ceremony Thursday in the Vatican gardens for Afineevsky, and the director himself kept his distance.

The Catholic Church teaches that gay people must be treated with dignity and respect but that homosexual acts are “intrinsically disordered.” A 2003 document from the Vatican’s doctrine office stated the church’s respect for gay people “cannot lead in any way to approval of homosexual behavior or to legal recognition of homosexual unions.”

Doing so, the Vatican reasoned, would not only condone “deviant behavior,” but create an equivalence to marriage, which the church holds is an indissoluble union between man and woman.

That document was signed by the then-prefect of the office, Cardinal Joseph Ratzinger, the future Pope Benedict XVI and Francis’ predecessor.

Afineevsky, who is gay, had expressed surprise after the premiere that the pope’s comments had created such a stir, saying Francis wasn’t trying to change doctrine but was merely expressing his belief gay people should enjoy the same rights as heterosexuals.

On Thursday, he declined to take any further questions and sought to put attention on the main issues dealt with in the film: climate change, refugees and poverty.

“I am so proud that finally ‘Francesco’ is on its way to the road to change hearts and minds," he said at the prize ceremony in the Vatican gardens. “Finally, I am happy that I can bring voices from the Rohingya refugees, refugees from Syria, the voices of victims of sexual abuse, voices from different points from different corners of the world.”