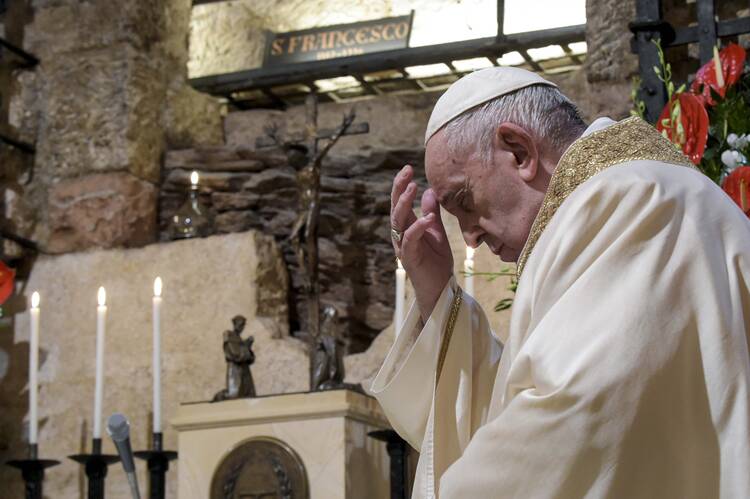 Pope Francis celebrates Mass at the tomb of St. Francis in the crypt of the Basilica of St. Francis in Assisi, Italy, Oct. 3, 2020. The pope signed his new encyclical, "Fratelli Tutti, on Fraternity and Social Friendship," at the end of the Mass. (CNS photo/Vatican Media)

Pope Francis’ new encyclical, Fratelli Tutti, was released today. The encyclical, which is the highest classification of papal document, is Francis’ diagnosis of the social problems plaguing our world—and his proposed cures.

In the 86-page document, Francis diagnoses a number of social ills, including what he’s called the “throwaway culture” that treats the environment, resources, and even people as disposable. He describes unjust economic systems that exploits workers in order to enrich a few wealthy people, and he goes into detail about the negative effects of both populism and globalization.

Listen and subscribe to Inside the Vatican on Spotify, Apple Podcasts or your preferred podcast app.

Faced with these problems, Francis calls for “renewed hope,” proposing a reform of the United Nations to give poor countries more power in international decision-making, global denuclearization and an end to capital punishment. He calls instead for a culture based on an encounter with those who are different.

In this brief “Inside the Vatican” podcast update, host Colleen Dulle breaks down the document’s main themes.