A deep dive into the secret archives of Pope Pius XII 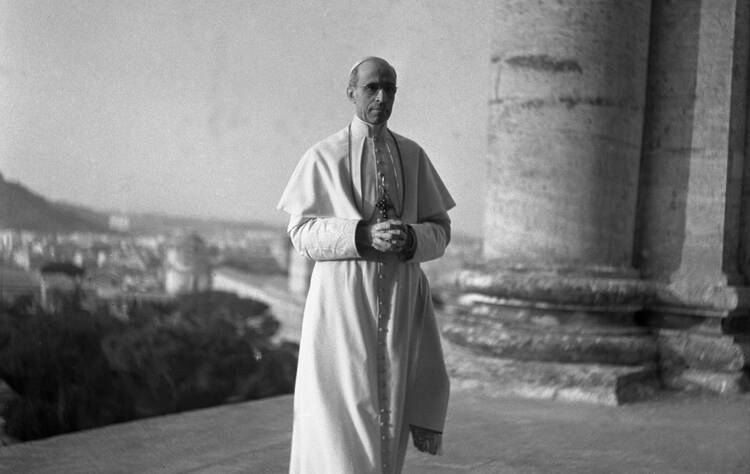 Pope Pius XII, who led the Catholic Church from 1939 to 1958, is pictured in this undated photo at the Vatican. (CNS photo/Vatican Media)

On Oct. 16, 1943, Nazi SS forces arrested 1,200 Jews in Rome’s historic Jewish quarter, just across the Tiber from the Vatican. Almost all of them were killed at Auschwitz within a few days.

Though many people expected Pope Pius XII to publicly condemn what had happened just outside his window, he stayed silent, intervening instead through private channels to stop the deportations.

Many documents from the Second World War remained sealed until the full archive was finally opened in March.

Robert Ventresca, a professor at Ontario’s Western University and a biographer of Pope Pius XII, sometimes walks around that neighborhood, remembering the atrocities that happened there and the Vatican’s public silence. It helps him connect to the reality of history after spending days in the Vatican’s ornate, sunlit reading rooms reading wartime archive documents.

Mr. Ventresca is one of the many scholars who have eagerly awaited the opening of the Vatican’s secret archives from the papacy of Pope Pius XII, which spanned from 1939 to 1958. While thousands of the documents from the Second World War were released in the latter half of the 20th century, part of a Vatican effort to clear Pius’s name amid rumors he had collaborated with the Nazis and Fascists, many more remained sealed until the full archive was finally opened to researchers in March of this year.

But in the blink of an eye, the archives closed again when the coronavirus pandemic shut down all nonessential business in Italy and the Vatican. They have slowly begun to reopen, with only a few researchers at a time gaining access, and a few details trickling out.

For Mr. Ventresca, it comes down to what Pius and his advisors knew and what they did with that information.

Mr. Ventresca’s original appointment in June was rescheduled for early 2021; until then, he is closely following the findings reported by other scholars. However, he is generally skeptical of any “smoking gun” reports. There is nothing in the archives, he said, that will change the already-known facts of the Vatican’s wartime actions. What he will look for, he told me, are clues to the rationale behind Pius’s controversial decision not to speak publicly against the Nazis.

I spoke with Mr. Ventresca for a new deep-dive episode of America’s “Inside the Vatican” podcast. A survey of our listeners early this summer found overwhelming support for episodes digging deep into a single topic. So, to kick off our new season, I spoke with both Mr. Ventresca and Massimo Faggioli, a church historian and columnist for La Croix International and Commonweal,about what is already known about Pope Pius XII’s actions during the war, and what information scholars are seeking when they get to the archives.

For Mr. Ventresca, it comes down to what Pius and his advisors knew and what they did with that information. “There’s this consistent pattern of kind of discounting information,” Mr. Ventresca told me on the podcast. “They would say they were doing so because they wanted to be prudent.... I want to know whether there's something else going on there. I have a suspicion that they’re maybe willfully downplaying information. And, if that’s the case, and if we can find a pattern where they’re choosing to disbelieve information of mass killings of Jews, for example, that’s very significant.”

Podcast: How will historians judge Pope Pius XII’s decisions during World War II?
Inside the Vatican

Mr. Faggioli, the church historian at Villanova University, agrees with Dr. Ventresca that there will probably not be anything sensational in the archives. No clues about rationale will change the facts of what Pius did and failed to do.

Mr. Faggioli told me that despite a desire to sensationalize each bit of information that comes out of the archives, which he likened to mistaking a piece of a puzzle for the whole thing, these archives will likely show that like most Catholics during the war, Pius was neither a raging anti-Semite nor someone who heroically stood up to Hitler. The difference, as we discuss on the show, is that the cause for canonization of Pius is underway, and reacting the same way as the average Catholic did may not merit recognition as a saint.

You can listen to our full deep-dive episode of Inside the Vatican about the opening of the secret archives of Pope Pius XII by using the audio player embedded in this article. You cansubscribe to the show on Spotify, Apple Podcasts or your preferred podcast app.

@ColleenDulledulle@americamedia.org
See all work by Colleen Dulle
Show Comments ()
Join the conversation: Login or create an account
Before you can comment, you need to update your profile to include your first and last name, as required in our comments policy. Then reload this page and you'll be set up for commenting. Update your profile