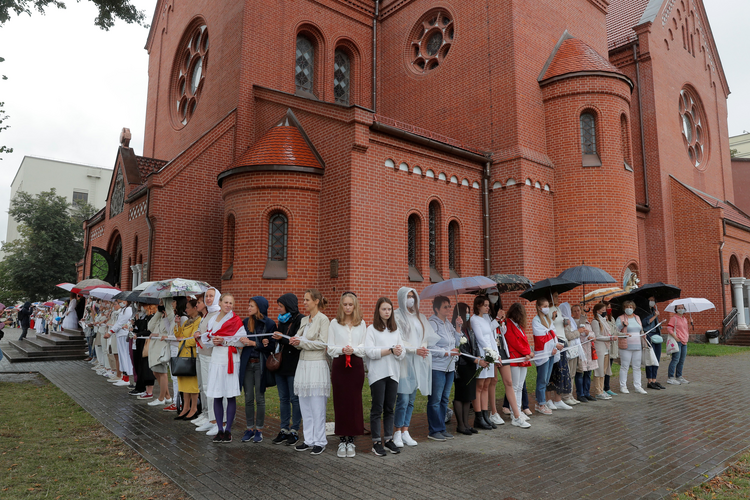 MINSK, Belarus (CNS) -- Catholic leaders in Minsk protested after law enforcement agencies blocked the entry of Sts. Simon and Helena Church and later arrested protesters who had fled inside to avoid police.

"The church is a sanctuary of God that is open to everybody," he said.

"Blocking the entry and exit of people contradicts the right of citizens for freedom of conscience and religion guaranteed by the Constitution of the Republic of Belarus. Moreover, it insults the feelings of believers and goes beyond the laws of mankind and God," added his statement, also supported by Auxiliary Bishop Aliaksandr Yasheuski.

Later, Minsk Archbishop Tadeusz Kondrusiewicz, who was out of the country when the incident occurred, issued a statement of support for his auxiliaries and noted that the Belarusian armed forces are supposed to protect citizen rights, not hinder them.

He also called for reconciliation and dialogue to resolve the political instability in the country, which began after Aug. 9 elections in which the nation's electoral commission awarded President Alexander Lukashenko his sixth election win, with 80.1% of votes.

His nearest challenger, Svetlana Tikhanovskaya, a 37-year-old rights activist and former teacher, fled to neighboring Lithuania after the ballot.

During the nationwide protests, police arrested thousands, including at least two priests who had tried to intervene with security forces.

Why protesting injustice is a fundamentally Christian act
Thomas Graff

In the Aug. 26 incident, police had dispersed protesters in a nearby square, and about 100 of them took refuge in the church to escape. Police blockaded the entrances for several hours and, after opening the doors, arrested several people who left the church, reported the Rome-based AsiaNews.

In a message read in churches nationwide Aug. 16, the bishops said, "Blood has been shed in an active confrontation, leaving many physical and moral victims, including peaceful and innocent people of all ages."

"The Catholic bishops of Belarus condemn every act of violence committed by brother against brother. We therefore call again for an end to unnecessary aggression, and for dialogue for humanity and society," the statement said.

Provide feedback on this article
Join the conversation: Login or create an account
Before you can comment, you need to update your profile to include your first and last name, as required in our comments policy. Then reload this page and you'll be set up for commenting. Update your profile
Advertisement
More: Europe