Myanmar’s religious leaders appeal for peace and the common good 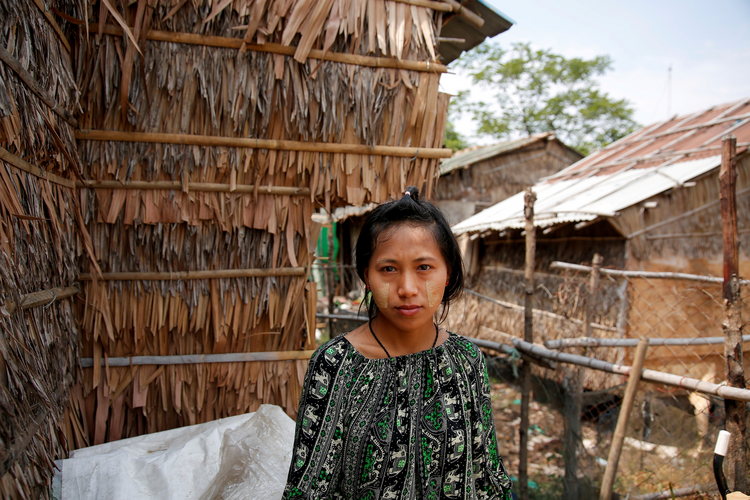 A young woman is pictured in a file photo near her hostel in Yangon, Myanmar. (CNS photo/Myat Thu Kyaw, Reuters)

As Myanmar prepares for a general election on Nov. 8 and a major peace conference (the 21st Century Panglong Conference) on Aug. 12 through Aug. 14, the country’s main religious leaders—Buddhist, Christian, Muslim, Hindu and Sikh—have appealed to the nation’s civilian, ethnic, military and other religious leaders to make a determined joint effort for peace, justice, protection of the environment and the consolidation of democracy.

They noted in the appeal that “Myanmar is caught in a three-fold global crisis”: the coronavirus pandemic that “has halted humanity” but “gives us a chance to take new paths”; “environmental threats” that “puts all at risk” because Myanmar “is one of five countries most affected by climate change this century”; and “a global wildfire [that] reveals how deeply race relations matter.”

The country has eight major tribes and another 135 ethnic groups with different languages, dialects and cultures.

This pertains in Myanmar, they said, where “people cling to the folly of assuming a ranking in ethnic differences.” The country has eight major tribes and another 135 ethnic groups with different languages, dialects and cultures.

The appeal was signed by the more than 40 of the foremost religious figures of this majority-Buddhist state of over 54 million people (6.2 percent are Christian, with 750,000 Catholics), including Cardinal Charles Maung Bo, the president of the Federation of Asian Bishops Conferences, and Venerable Dr. Khammai Dhammasami, fellow and chaplain, Oxford University.

Echoing the view of many of the inhabitants of this land, they declared, “We are weary of war, worn down by enmities,” and they asked: “Why is it that Myanmar’s conflicts never end? Where does responsibility lie?”

They attributed responsibility to various sectors. First, “one may accuse the belligerence of the Tatmadaw,” Myanmar’s armed forces, “even [its] obstinacy in refusing a full ceasefire to allow the nation to cope with the pandemic,” the religious leaders said. The Tatmadaw has ruled the country for 60 years and today holds the balance of power in the parliament of this fledgling democracy.

The country has been ruled for the past five years by a democratically elected government led by the Nobel Peace Prize laureate Aung San Suu Kyi.

Next, they said, “one may deplore the faint authority of the civilian government, or the lack of due process in the judicial system.”

The country has been ruled for the past five years by a democratically elected government led by the Nobel Peace Prize laureate Aung San Suu Kyi and her National League for Democracy. This civilian leadership has yet to deliver on its electoral promises to end the nation’s various conflicts and boost the economy and, moreover, has drawn worldwide criticism because of its inability to halt the military’s persecution of the Rohingya, a minority Muslim population.

They added, “One may also accuse ethnic leaders and truant cronies who benefit too much from trade in jade or drugs to desist.” They also acknowledged that “one may deplore that we religious leaders are too timid in protesting injustice.”

Given this diffuse responsibility, the religious leaders appealed directly “to all leaders of Myanmar...to listen with respect to one another and determine to seek the good of all,” sharing a conviction that “a golden opportunity is now given us in the new conditions and new challenges in our world” and urging all parties to “seize this moment.”

“What can we do differently instead of returning to senseless divisions?”

Looking to the future, they asked, “What can we do differently instead of returning to senseless divisions?” They suggested that attention be given first to the young people of Myanmar, where 28 percent of the population is under the age of 24, and recalled that “for decades [young people] have been given no opportunities at home and so went abroad by the millions, to labour as slaves.”

They asked: “How can we best promise a future and give health, benefit and dignity to our people? With what courage and creativity can we claim our right to respect, equality, sustainable prosperity and enduring peace for Myanmar?”

The religious leaders appeared to link Myanmar’s conflicts not just to ethnic factors but also to the unscrupulous quest by outsiders for the wealth and mineral resources of the country. They noted that Myanmar “is surrounded by many neighbours”—China, India, Bangladesh, Laos and Thailand—and said, “They see the riches of our country, our gold, teak and jade, our generous rivers and untouched forests.

“When we fight one another, we become distracted, our land is ravished, our young are destroyed by addictive stimulant drugs, and thousands of our young women and men leave their country only to lose their dignity and their lives,” they said.

They noted that “again last week hundreds of young jade miners were buried in watery graves, while foreigners run away with our wealth.”

They said: “When we fight, we put our young men at enmity with their brothers. Their lives and limbs are broken, mothers weep and young wives are made widows.... It is time to stop.”

“To build a nation, we need not be afraid of difference, but rather learn to negotiate, compromise, dialogue and rejoice in who we are.”

They recalled the colonial strategy “to divide and rule” and pleaded with the civilian, ethnic, military and religious leaders of today, “Let us not be misled again.”

“To build a nation,” they said, “we need not be afraid of difference, but rather learn to negotiate, compromise, dialogue and rejoice in who we are.” Then, referring to the upcoming election, they said: “When we elect a civilian government, are we not choosing who has authority in our nation? Is not democracy our goal in the elections?”

“They may pause the fighting, but the forests are still plundered. Precious riches are still taken from our soil and stolen from future generations.”

They urged the present-day leaders to “go deeper in your negotiations” and reminded them: “We do not protect the rights of our poor when we do the same as the aggressors. To trade with thieves is to deal in death.”

They pleaded with Myanmar’s leaders to “choose the uphill path of the ‘new,’ not the downhill path of the ‘safe.’ Confront your enemies with truth. Work to convince them that peace is in their best interests too.”

They called on the country’s leaders: “Invest in hope. Prepare for the future world after the pandemic. Listen to the cries of Mother earth. Respect one another. Encourage our young to study,” adding, “Asia and the world will need what Myanmar can contribute for generations to come.”

They reminded them: “Our cultures are treasures, built over centuries. The forests of Myanmar are the lungs of Asia. Our indigenous people know how to conserve them. Myanmar’s paddy fields are the rice bowl of Asia. Our farmers deserve just recompense. The youth of Myanmar are tomorrow’s peace makers of ASEAN. Prepare them well.”

They assured them that “the Buddhist, Christian and Muslim people of Myanmar, with [the] ethnic and community leaders, can live the message that the world longs to hear.”

“When we unmask insincerity, heed one another and look in harmony to the future, we will promote a world that is peaceful, just and inclusive,” they said. “Then Myanmar will be a proud member of the family of nations.”