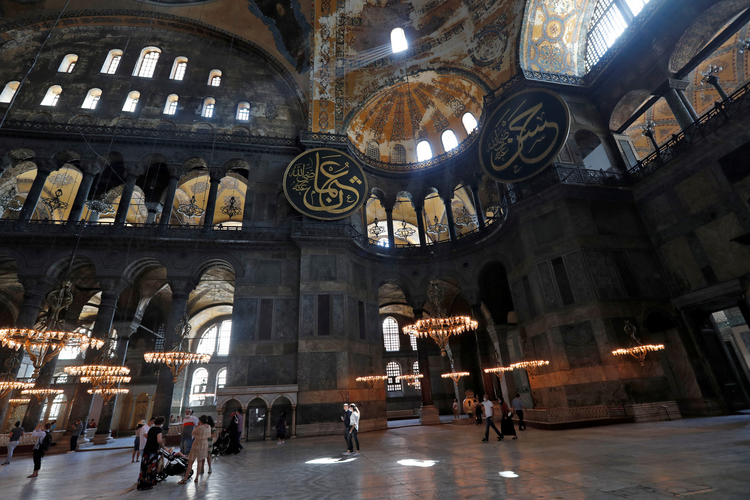 Pope Francis today expressed his great sadness at the reconversion of Hagia Sophia in Istanbul into a mosque by decision of Turkey’s President Recep Tayyip Erdoğan on July 10. “I am very saddened,” he said, with his facial expression and tone of voice expressing deep emotion.

Departing from his prepared text greeting seafarers on this Sunday which is celebrated as “the international day of the sea” or “Sea Sunday,” Pope Francis said that the thinking of “the sea carries me a little farther away in my thoughts: to Istanbul. I think of Hagia Sophia and I am very saddened.”

I think of Hagia Sophia and I am very saddened.

The pope avoided mentioning the president by name or using the word “mosque,” referring only to Hagia Sophia. Nonetheless, his message was clear when he addressed pilgrims in St. Peter’s Square on Sunday, July 12. He made clear that he does not agree with this decision, but he avoided saying more, perhaps seeking to avoid being accused of interfering in the internal affairs of the Turkish republic.

There has been strong tension in the relationship between Francis and Erdoğan in the past, especially over the Armenian question and Francis’ use of the word “genocide” when celebrating mass in St. Peter's on the centenary of the tragedy with Armenian church leaders in attendance. That commemoration led to Turkey temporarily withdrawing its ambassador to the Holy See.

Up to now the Holy See had not made any public statement regarding the reconversion of Hagia Sophia into a mosque, a change long desired by President Erdoğan, and now made possible by decision of Turkey’s top court. Other Christian church leaders, however, including the Ecumenical Patriarch of Constantinople, Bartholomew I and Metropolitan Hilarion of the Patriarchate of Moscow, made public their opposition to this in advance and asked that it retain the status of a museum that it has had since 1934.

On July 11, a day after the Turkish president announced his decision, Professor Ioan Sauca, the interim-secretary general of the World Council of Churches, sent Mr. Erdoğan a letter expressing “the grief and dismay of the World Council of Churches and of its 350 member churches in more than 110 countries, representing more than half a billion Christians around the world at the step you have just taken. By deciding to convert the Hagia Sophia back to a mosque you have reversed that positive sign of Turkey’s openness and changed it to a sign of exclusion and division.” The W.C.C. leader called on him “to reconsider and reverse” the decision.

Earlier today, as churches across the world remember seafarers, the Vatican dicastery for human development released a message, signed by Cardinal Peter Turkson, highlighting the vital role seafarers play across the world in the fight against Covid-19, by ensuring the supply of food and vital medical equipment. The Vatican’s message also drew attention to the grave problems that seafarers face not only because of piracy but especially because of travel restrictions that leave so many of them stranded far from home when their contracts end. The message speaks of the terrible toll all this takes on their lives and that of their families and loved ones, and assures them that the church is there to help them.

The cardinal concluded the message by assuring seafarers, “You are not alone. You are not forgotten.”

Cardinal Turkson’s message noted that while the coronavirus pandemic “brought many countries to a complete shut down and to enforce an extended lockdown for many businesses in an effort to prevent the spread of the virus,” on the other hand “the maritime industry continued its operation, adding a multitude of challenges to the already problematic lives of the seafarers, and putting them on the front line in fighting against the coronavirus.” Indeed, “vessels that are transporting almost 90% of products that are badly needed to carry on our normal lives in these taxing circumstances such as medication and medical equipment, remain at sea.”

The Vatican’s message also noted that “estimates suggest that, every month, 100,000 seafarers who finish their contracts and look forward to flying home were prevented from doing so by the outbreak of COVID-19 and the subsequent closure of borders and flights,” leaving them stranded around the globe.

The cardinal concluded the message by assuring seafarers, “You are not alone. You are not forgotten.” He reminded them that chaplains and volunteers of Stella Maris, the church’s ministry to seafarers, are always available to them, including through a “virtual chaplaincy” on social media.