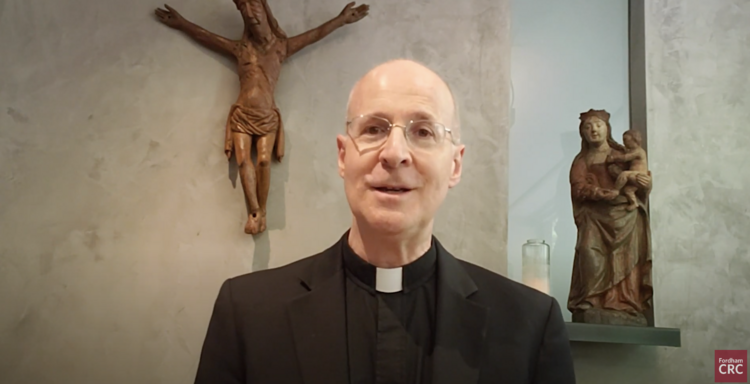 A group of Catholic leaders offered words of encouragement, advice and support to L.G.B.T. members of the church in a new video released in June to mark Pride Month. The video, titled "Outreach 2020: Catholic Leaders Speak with the LGBTQ Community," features a diverse collection of church leaders, including bishops, priests, women and men religious, and lay ministers.

Outreach 2020, a large gathering focused on L.G.B.T. ministry, was scheduled to take place in New York this month, but it was postponed until 2021 because of the Covid-19 pandemic. The conference, which would have been held at the Center on Religion and Culture at Fordham University, intended to bring together hundreds of ministry professionals to discuss topics including theology, Catholic schools, family, gender and mental health. Organizers wanted to make sure that L.G.B.T. Catholics still heard a welcoming message this year.

Conference organizers wanted to make sure that L.G.B.T. Catholics still heard a welcoming message this year.

“We had so many amazing speakers that we decided to do something online around the time the conference would have happened. We wanted to offer our L.G.B.T.Q. Catholic friends some words of support from all these great Catholic leaders," said James Martin, S.J., an editor-at-large at America, who organized the conference. America is a media sponsor of the conference.

Over the course of the 42-minute video, some church leaders read Scripture aimed at offering L.G.B.T. Catholics spiritual guidance, others connect the ongoing protests for racial justice to L.G.B.T. acceptance, and others simply affirm the importance of L.G.B.T. people being part of the Catholic church.

Bishop John Stowe, of the Diocese of Lexington, Ky., offers “greetings and peace and all good to our brothers and sisters in the L.G.B.T. Catholic community.”

“I want you to know how much I admire your journey to faith and your journey to integrity and authenticity,” he says. “I admire your perseverance to remain faithful to your Catholic identity and to be faithful to who you are.” In 2017, Bishop Stowe led prayers at a gathering in Chicago with New Ways Ministry, an organization that fosters connections between the L.G.B.T. community and the church. He has also voiced support for the L.G.B.T. community on his Twitter feed.

Bishop John Stowe: “I admire your perseverance to remain faithful to your Catholic identity and to be faithful to who you are.”

Luisa Derouen, a Dominican sister, describes her 20 years of ministering to transgender people as the “greatest honor and privilege of [her] life.” She has acted as a spiritual companion for people in the process of transitioning and as an advocate for them, often facilitating dialogue and bearing witness to the integrity of trans life.

Others in the video, such as the Rev. Gregory Greiten, pastor of St. Bernadette’s Parish in Milwaukee, speak from their personal experinces as gay Catholics. Father Greiten introduces himself in the video “as a brother in Christ who is gay...and as a fellow L.G.B.T.Q. Catholic.”

Father Greiten, who has spoken publicly about his struggles as a gay priest, tells L.G.B.T. viewers, “You are loved. You are a beloved child of God.” Father Greiten has been a priest since 1992 and came out in 2017. At the time, he said he came out because he felt compelled to live his life truthfully, that he could no longer “live the lie of masquerading as a straight man in the priesthood.”

Father Martin said that while the video contains a multitude of voices and perspectives, they all preach a message meant to be welcoming to L.G.B.T. people.

“Three themes stood out. First, that L.G.B.T.Q. people are an important—an essential—part of the Catholic Church. Second, many speakers acknowledged the difficulties that L.G.B.T.Q. Catholics often face in a church that can make them feel marginalized, ignored or even rejected. Finally, nearly every speaker expressed gratitude for the faith and perseverance that L.G.B.T.Q. Catholics demonstrate and for their contributions to the church," Father Martin said.

“Nearly every speaker expressed gratitude for the faith and perseverance that L.G.B.T.Q. Catholics demonstrate and for their contributions to the church."

L.G.B.T. Catholics continue to struggle to find their place in the church. Just this month, a church musician in Detroit was fired after her marriage to her wife was made public, the Archdiocese of Indianapolis released guidelines that may ban transgender students from its schools, and a group for L.G.B.T. Catholics in Detroit was barred from holding Masses in Catholic churches.

The Outreach 2020 video is meant not only to be a public declaration of solidarity with the L.G.B.T. Catholic community but also to provide insight to Catholic allies, inside and outside of the church. One speaker, Sivagami Subbaraman, the director of Georgetown University’s L.G.B.T.Q. resource center, says that both individuals and institutions must work toward accepting, loving and valuing L.G.B.T. Catholics.

We can (and should) do better by our Catholic L.G.B.T. school teachers
Luke Janicki

She quotes the late Howard Gray, S.J., a leader in Ignatian spirituality who once served as vice president for mission at Georgetown and said, “L.G.B.T. people are loved by God. The church is learning to love us.” The L.G.B.T.Q. Resource Center at Georgetown is one of the oldest institutionally funded L.G.B.T. centers in a Jesuit university in the United States. Ms. Subbaraman has led the center since 2008, pioneering research and strategy for integrating L.G.B.T. students into Catholic universities.

When asked how Catholic allies can help to make the church better for L.G.B.T. people, Father Martin said that the sort of dialogue that the video promotes is the basis of true change in the church. He suggested that cisgender people, who identify as the gender assigned to them at birth, and heterosexual Catholics can help the L.G.B.T. faithful “by listening to them. Too often the church has spoken about them, told them what to do or issued statements about them without ever listening to them.

“We need to ask,” he continued, “Where do they find God? Who is Jesus for them? What is the church for them? What do they long for? For the church to be more affirming of L.G.B.T.Q. people, we first have to affirm their voices."