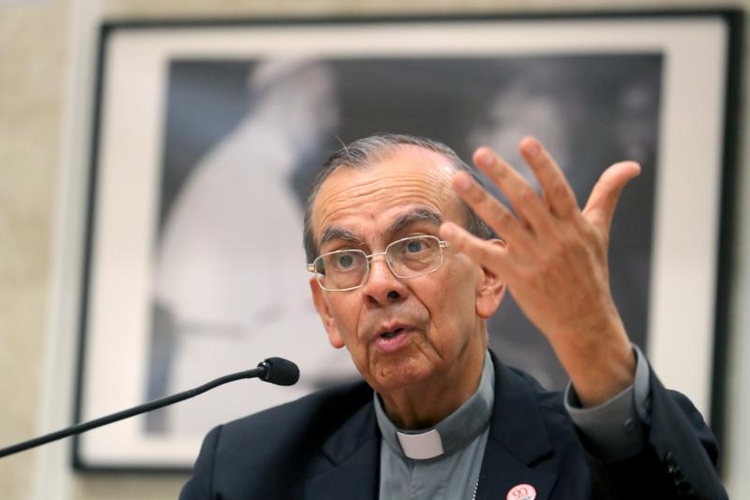 WASHINGTON (CNS) -- The memes mocking the Salvadoran cardinal spread almost as fast as the virus.

After calling for transparency and dialogue in the country, Cardinal Gregorio Rosa Chavez, auxiliary bishop of San Salvador, found himself under attack, including being called a "Judas" and other names via social media. The attacks increased after he met sometime in June with members of a national private sector association and members of the country's legislative assembly to discuss the pandemic. It was not clear why Salvadoran President Nayib Bukele did not attend the meeting.

Bukele and the assembly have been at odds about what measures and what powers can be given to the president to combat COVID-19.

The Salvadoran bishops' conference said in a statement June 21 that, with "great pain," it had discussed the "attacks" on "our beloved" cardinal.

"We know his track record and the important services he has rendered to the church and to the country," the bishops said. "That is why it seems to us quite unfair and unacceptable to be attacked and offended on social networks. We consider it as an attack not only on him, but on the church. At the same time, we express to our honorable brother our full support and solidarity."

In a brief statement the cardinal read the same day, he said his intention in attending the meeting was as a mediator to try to get the different branches of government to talk about a unified response to combat the pandemic. The disagreements led to the expiration of lockdown measures just as the crisis was getting worse in the country and following tropical storms that wreaked havoc in El Salvador's agricultural sector.

The cardinal said he had assumed the executive branch would be present at the meeting, but several hours went by without a representative showing up. The optics of not meeting with all sides gave way to more insults. Though the cardinal said ultimately there was not an official meeting because the executive branch was not present, he stayed to listen to a "presentation" and then went home. He said he wanted to explain what had happened for "people of goodwill who are confused" or who were worried about how the meeting had been characterized.

"God knows my heart, and the people know it as well," he said.

In their statement, the bishops lamented that the "country's political situation continues to be marked by polarization," which does not lead "to the social peace that we so badly need."

"We ask God to calm the spirits and lead us on paths of respect, tolerance and a sincere search for the common good," they said.

"Finally, we ask the faithful to continue fighting to remain firm in their faith and in their Christian witness. As a church we are very supportive, accompanying and helping those in need. Let us all pray together for this blessed land so troubled and so in need of harmony and peace," the bishops said. "Let us also pray for the victims of this terrible pandemic and the recent torrential rains, for the suffering families and the victims. May the Lord grant eternal rest to the deceased and health to the sick. May God sustain you with his grace and reward all those who care for the sick and those who help our poorest and neediest brothers."

Provide feedback on this article
Join the conversation: Login or create an account
Before you can comment, you need to update your profile to include your first and last name, as required in our comments policy. Then reload this page and you'll be set up for commenting. Update your profile
Advertisement
More: Bishops / Latin America