Is there only one real presence? 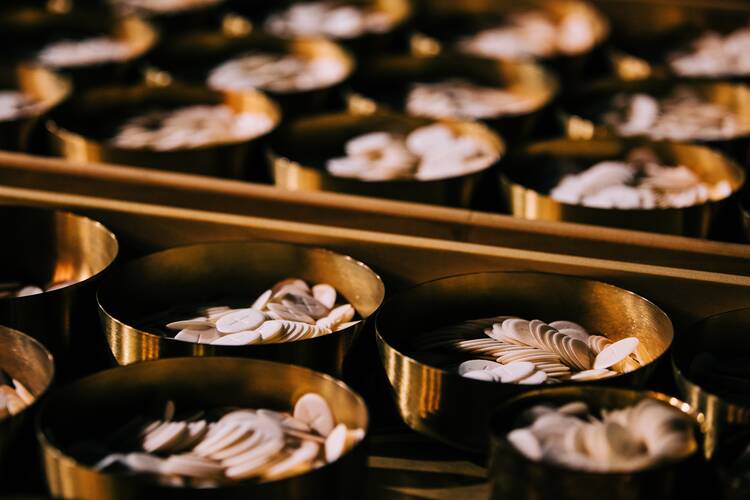 Photo by Grant Whitty on Unsplash

A Reflection for the Feast of Corpus Christi

A few weeks ago, members of the finance council were surveying the needs of our parish facilities. As we entered the church itself something odd happened, something that used to occur when I was a seminarian giving tours of St. Peter’s Basilica in Rome. I was speaking, pointing out features—in this case, things in need of repair. Crossing the threshold of the church, I lost the attention of my companions. They were staring into space, gawking not at the glory of St. Peter’s Basilica but, wistfully, at the walls of their own parish church.

I love Saint Joseph’s, but it is no St. Peter’s. I could claim that it is the loveliest church in central Kansas, but the state is full of such treasures, testaments to the faith of a different era.

So, how did I lose my listeners? They were gazing in silent awe because they were home again, because they were standing in a spot whose very stones they love. Everyone concurred when a couple of members said, “I haven’t been in here for weeks” and “I didn’t realize how much I missed it.”

The feeling that came over my companions was something like seeing, after years of absence, the inside of the home where you grew up or the house where your grandparents once lived. It is not that the space is sacred, at least not in the first blush of that word. It is that the space is you. You are like an animal seeing its own carapace. This was once your shell. The place that protected you. Your home.

Maybe we need four more feasts because there are “real presences” that we are scanting, if not, perhaps, even scorning.

The Feast of Corpus Christi was created in the 13th century to reverence the real presence of Christ in the Eucharist. In the 21st century, this time of virus has revealed an imbalance in our understanding as Catholics. We seem convinced that holy Communion is the most precious of sacred objects, even if most Catholics are normally content to receive it the relatively few times a year that they come to Mass.

The problem is that we have reduced the Mass itself into something that exists only to create the Eucharist. Some Catholic leaders are now even urging, “Let’s have Mass as quickly and as often as possible to get Communion to the faithful.”

How can we honor the body and blood of Christ when we can’t receive communion?
Jaime L. Waters

We celebrate the Eucharist every week. Why do we need Corpus Christi?
Terrance Klein

If “concept feasts” were the answer—feast days drawn not from the lives of Christ and his saints but from doctrines like the Holy Trinity or Divine Mercy—then maybe we need four more of them because there are “real presences” that we are scanting, if not, perhaps, even scorning.

“Sacrosanctum Concilium,” the Second Vatican Council’s Document on the Divine Liturgy, teaches five ways in which the Lord Jesus is present to us in the Eucharist. Remember that the word “Eucharist” refers both to the meal and to the food received.

To accomplish so great a work, Christ is always present in His Church, especially in her liturgical celebrations. He is present in the sacrifice of the Mass, not only in the person of His minister, “the same now offering, through the ministry of priests, who formerly offered himself on the cross,” but especially under the Eucharistic species. By His power He is present in the sacraments, so that when a man baptizes it is really Christ Himself who baptizes. He is present in His word, since it is He Himself who speaks when the holy scriptures are read in the Church. He is present, lastly, when the Church prays and sings, for He promised: “Where two or three are gathered together in my name, there am I in the midst of them (Matt. 18:20)” (No. 7, emphasis added).

Maybe we still need Corpus Christi to remind us of Christ’s real presence in the Eucharist: Not all of the council members took a knee when we came into the presence of the Blessed Sacrament, as we insist that our students do. Yet all recognized that they had entered a holy place, a place like home, a spot made sacred in five ways, not just one.

As those who believe that God took flesh in Christ, we do not have a liturgy that stands above the weaknesses to which our flesh is heir. But this is our faith; it is not a cause for shame. The shame would be reducing a meal to the food received, either in a family or in the church. Either way, a home is lost.