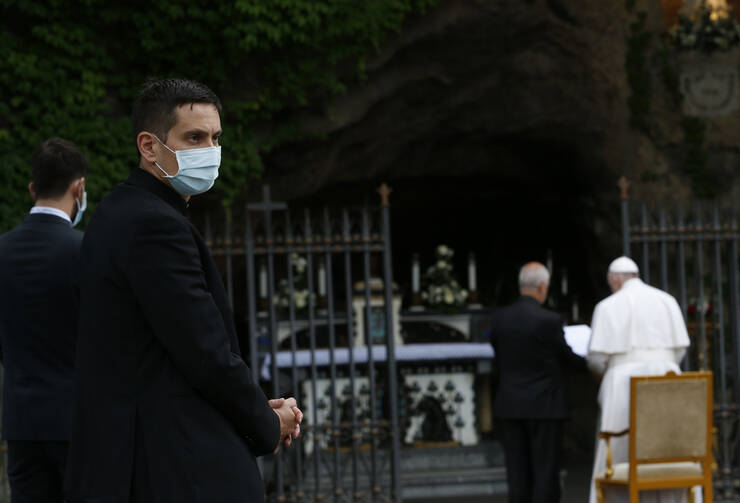 A cleric wears a mask as Pope Francis leads the recitation of the rosary during a prayer service at the Lourdes grotto in the Vatican Gardens on May 30. (CNS photo/Paul Haring)

Pope Francis has written a letter to the priests of the Rome diocese in which he reflects on the Covid-19 pandemic and their ministry during it, and encourages them as they accompany their people out of lockdown to “keep hope alive and active” and to build “the new ‘normality’ that we desire.”

Each year since becoming pope, Francis has celebrated the Chrism Mass during Holy Week with the priests of the Rome diocese and, on each occasion, has delivered a homily that was meant for priests worldwide. It was not possible to do so this year because of the pandemic, not even before Pentecost as he had hoped, so he decided to write this letter, which has relevance for priests in other places.

Pope Francis: “the new phase we are beginning asks us for wisdom, foresight and common commitment, so that all the efforts and sacrifices made so far will not be in vain.”

The Vatican released the letter one hour before Francis led the rosary at the Lourdes Grotto in the Vatican Gardens to ask God to remove the pandemic from the world. He had invited believers worldwide to join in this prayer this evening—the second major prayer event that he has led since the pandemic started, following the one on March 27 from the steps of St. Peter’s Basilica. More than 100 people, wearing masks and respecting social distance, joined him in the gardens, and countless thousands of faithful gathered at Marian shrines around the world to participate in the event by internet.

Francis began his letter by telling the priests who are now accompanying the lifting of the lockdown in Italy, which comes into full effect on June 3, that “the new phase we are beginning asks us for wisdom, foresight and common commitment, so that all the efforts and sacrifices made so far will not be in vain.”

During the full-blown pandemic, he said, “many of you shared with me, by e-mail or telephone, what this unexpected and disconcerting situation has implied” and “encouraged by these exchanges, I am writing to you because I want to be closer to you, in order to accompany, share and confirm your journey.”

He reminded them that “hope also depends on us and requires that we help each other to keep it alive and active; that contagious hope that is cultivated and strengthened in the encounter with others and that, as a gift and a task, is given to us to construct the new ‘normality’ that we so desire.”

He recalled that Christian communities today are experiencing something similar to what the first apostolic community experienced after the death of Jesus, when “they lived through moments of confinement, isolation, fear and uncertainty.” He said they were behind closed doors when Jesus “surprised” them and “stood among them and said, ‘Peace be with you!’” and then showed them his wounded hands and feet.

“We know that from tribulation and painful experiences we do not emerge the same as we were before. We must be vigilant and attentive.”

In his letter, Francis wrote that priests had similarly experienced fear and uncertainty as the pandemic spread: “We felt in an amplified way the precariousness of our lives and apostolic commitments. The unpredictability of the situation highlighted our inability to live with and face the unknown, which we cannot govern or control, and like everyone else, we felt confused, frightened, helpless.” He also wrote that “our common fragility stripped us of any false idealistic or spiritualistic complacency, as well as any attempt at puritanical escape. No one is extraneous to everything that is happening.”

Francis told them, “we know that from tribulation and painful experiences we do not emerge the same as we were before. We must be vigilant and attentive.”

He warned them against “the temptations” that “will prevent our communities from promoting the new life that the Risen Lord wants to give us.” They include “substitute or palliative activities, waiting for everything to return to ‘normal’ [and] ignoring the deep wounds and the number of people who have fallen in the meantime.”

Francis referred to Jesus’ appearance to his disciples “amid the isolation, fear and insecurity in which they lived.”

Again referring to Jesus’ appearance to his disciples “amid the isolation, fear and insecurity in which they lived,” Francis wrote, “his presence in the midst of confinement and forced absences announces, for the disciples of the past as for us today, a new day capable of questioning immobility and resignation and of mobilizing all gifts in the service of the community. With his presence, confinement became fruitful, giving life to the new apostolic community.”

Returning to the present, Francis wrote that, as priests, “we are called to announce and prophesy the future, like the sentinel announcing the dawn that brings a new day: Either it will be something new, or it will be more, much more and worse than usual.” He reminded that “the Resurrection is not only a historical event of the past to be remembered and celebrated; it is more, much more: it is the announcement of the salvation of a new time that resounds and already breaks out today.”

In perhaps the most significant passage of his letter, Francis told the priests of Rome and the world, “if an invisible, silent, expansive and viral presence has put us in crisis and caused us upheaval, let this other discreet, respectful and non-invasive presence [of the Risen Christ] call us again and teach us not to be afraid to face reality.”

Facing the Covid-19 storm, put your faith in the Lord, Pope Francis tells Rome and the world
Gerard O’Connell

A prayer for Pentecost in the pandemic
Leo J. O’Donovan, S.J.

Indeed, he wrote, “if an impalpable presence has been able to disrupt and overturn the priorities and seemingly irremovable global agendas that so suffocate and devastate our communities and our sister earth, let us not fear that it is the presence of the Risen One that traces our path, opens horizons and gives us the courage to live this historic and unique moment.”

Francis reminded the priests of his diocese and of the world that “the Resurrection is the announcement that things can change.”

As priests, he said, “it is up to us to take responsibility for the future and plan it as brothers.” He encouraged them to place “our fragility, the fragility of our people, that of all humanity, in the wounded hands of the Lord, who transforms us, who uses us like bread, takes our life in His hands, blesses us, breaks us and shares us and gives us to His people.”