The Holy Spirit is moving us to act against racism. 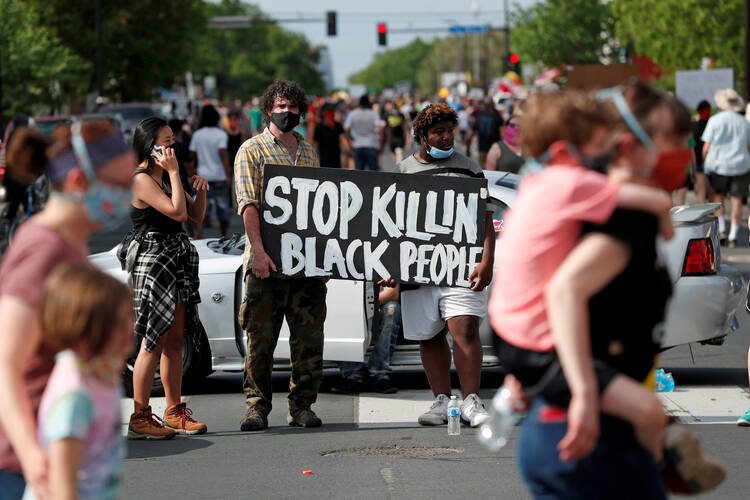 Racism, as St. John Paul II said, is one of the most “persistent and destructive evils” in the United States. It is also a social sin—that is, a sin that is committed not only by individuals, but which is part of the social structure in which all Americans live. And I have to acknowledge my own participation in it: as an American who has benefited from white privilege and who lives with the legacy of slavery, as a Catholic who lives with the legacy of a church that has failed to give the sin of racism the attention it demands in this country and as a Jesuit priest whose religious order in this country once owned men and women as slaves.

Racism, as St. John Paul II said, is one of the most “persistent and destructive evils” in the United States. And I have to acknowledge my own participation in it.

Racism is, as, the Rev. Bryan Massingale, a Catholic theologian, says, a sickness of the soul. This sickness has been spread since the first Africans were forcibly brought to America and sold as slaves 400 years ago. Our nation is one founded and continuously shaped by white supremacy.

“White supremacy,” writes Father Massingale, “fundamentally is the assumption that this country, its political institutions, its cultural heritage, its social policies and its public spaces belong to white people in a way that they do not belong to others. It is the basic assumption that some naturally belong in our public and cultural space and others have to justify being there. Further, it is the suspicion that those ‘others’ are in ‘our’ space only because someone has made special allowances for them.”

“This,” writes Father Massingale, “is the most uncomfortable truth we must face as Americans about racism. Many want to believe that people of all races are equally guilty of racism; it is a way for the majority to let itself off the hook. But the honest truth is that if it were up to people of color, racism would have ended a long time ago. This is the deepest reason why racism is so often avoided or only dealt with in very superficial ways: because naming white supremacy makes white people uncomfortable. And white comfort sets the limits of engagement.”

The killing of George Floyd last week, or more precisely, the extrajudicial execution of George Floyd, preserved forever on film, again reveals the culture of white supremacy, a culture exacerbated by our president, encouraged by his dog-whistle appeals to racist ideas and egged on with his reprehensible comment last week, “When the looting starts, the shooting starts.”

Mr. Floyd’s murder is something that should enrage everyone, but especially white Americans.

Mr. Floyd’s murder is something that should enrage everyone, but especially white Americans. And make no mistake: the kind of righteous anger that is being felt is the same kind of anger that Jesus felt when he saw the Temple being desecrated in Jerusalem and turned over the tables of the moneychangers in a rage (Jn 2:13-16). Jesus saw something holy being defamed, as we do when we see a police officer’s knee being pressed upon a defenseless man, and when it is continued to press down on him even when he says, “I can’t breathe.”

How can anyone fail to see the resonances with Jesus on the Cross? Two thousand years ago, Roman soldiers pressed down a wooden cross on Jesus’s body, as other soldiers stood by, and as Jesus died, he cried out, “I thirst” (Jn 19:28). Last month, a police officer pressed a knee down on George Floyd’s body, as other police officers stood by, and as George Floyd died, he cried out, “Water.” So if you weep for Jesus on the Cross, and do not weep for George Floyd, then you are missing the point.

This is what strikes my own heart the most: not simply the legacy of racism that I know and read about, but seeing it in action, and seeing a beloved child of God treated like that. I can’t stand seeing people treated like that. I can’t describe adequately how angry it makes me, and why it moves me to tears. And I cannot imagine what a black person feels when they see that. And they see it a lot.

Do you feel anger, sadness, frustration, confusion and rage over the death of George Floyd? That is your Pentecost: That’s the Holy Spirit moving through you.

What can Catholics do about these sins? First, begin by listening to what our African-American brothers and sisters tell us. So I want to recommend a book, a speech and an article that have all challenged me. First, Darnell L. Moore’s book No Ashes in the Fire: Coming of Age Black and Free in America. Second, Father Bryan Massingale’s talk to a group of young people, “The Magis and Justice,” on the Catholic response to racism. And third Olga Segura’s recent article in America, “How Can Catholics Help Lead the Fight Against Racism?” You can read and listen, and then encourage your parish, especially if it is predominantly white, to talk about racism, and start faith-sharing groups to discuss how to combat it.

Yesterday was the Solemnity of Pentecost, when we celebrated the Holy Spirit entering the community of disciples, both personally and as a group. So do you feel anger, sadness, frustration, confusion and rage over the deaths of George Floyd, Breonna Taylor and so many others? That is your Pentecost: That’s the Holy Spirit moving through you. How else would God get you to move?

So listen to that Spirit moving within you; listen to what your African-American brothers and sisters have to say; and let the Spirit working through them teach you, and then act.