Criticizing a pope: A dialogue between Massimo Faggioli and Bill McCormick, S.J. 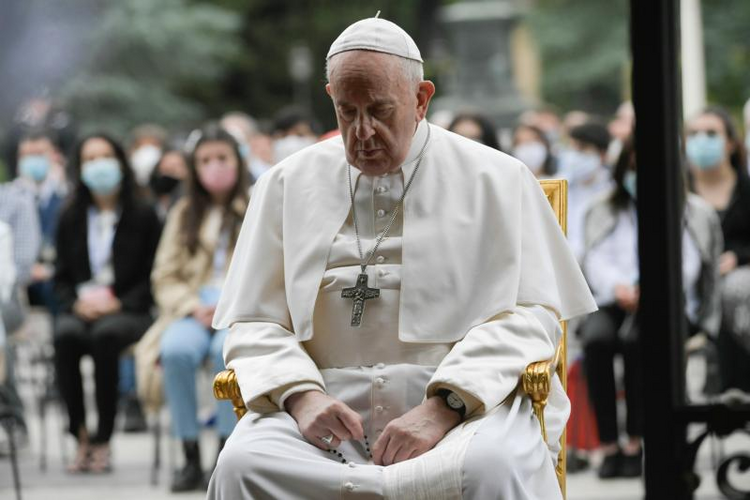 Pope Francis prays the rosary during a Marian prayer service at the Lourdes grotto in the Vatican Gardens on May 30, 2020. (CNS photo/Vatican Media)

I want to thank my friend, Bill McCormick, S.J., for the attention he devoted to my article on Pope Francis, published in two parts in La Croix International on April 14 and 15 of this year. This response is because his article (published by America on May 21) deserves a response. It addresses an issue that is ecclesiological.

The driving thesis of Mr. McCormick’s article is that “the papacy does not have an agenda: the papacy is an agenda in itself.” This is hard to reconcile with an ecclesiology of the papacy as an ecclesial ministry in the framework of a sacramental ecclesiology. But this approach has also far-reaching consequences. The first is that Mr. McCormick’s argument seems to be not about the style or content of my critique of Pope Francis’ approach to two particular issues, but about the very possibility of criticizing the bishop of Rome at all.

I wonder if Mr. McCormick allows for any level of papal critique, that is, of a still-reigning pope. I understand that in the Catholic Church we all live in the shadow of the First Vatican Council and its definition of the papacy. But it is well known that in the Catholic tradition, popes have been criticized by, among others, Dante and Erasmus. Obviously I do not want to draw any comparison among Dante, Erasmus and myself. I just want to make clear that criticizing the pope did not make them un-Catholic.

I understand that in the Catholic Church we all live in the shadow of the First Vatican Council and its definition of the papacy.

I find this approach to the papacy inconceivable for several reasons. First, Francis has talked repeatedly about the future of the church as a synodal church: Synodality is unimaginable without the possibility of expressing, reasonably and within due boundaries in terms of content and style, some opinions about the direction the church is taking on some particular issues. Second, I think we need to reject this Schmittian view, which always supposes a friend against an enemy, of the papacy and of the Catholic Church in general. Third, the papacy knows very well that uncritical praise can do more harm than faithful and obedient critics of the bishop of Rome.

The most disconcerting implication of the article by Mr. McCormick is that my kind of criticism of the pope reveals narrow cultural loyalties masquerading as religious faith. In one word, he sees my relationship with the papacy as “transactional.” Now, Jesuits know better than most that criticizing the pope has never been free of risks and often comes at a cost for those

who dare to speak in public, when they do that as part of their professional vocation and ecclesial ministry. In the best of the cases, that spiritual and ecclesial cost is kept secret or confidential, as in the old days, one might say: it is part of the sensus Ecclesiae. Exactly the opposite of transactionalism.

I thank my friend Massimo Faggioli for his response to my America article “What do we owe the office of the papacy?” He has been of great help in my own nascent work in matters relating to the church and politics, and I hope to continue to learn from him. For these and other reasons, I regret that he sees my article as a “denunciation.” I question neither Mr. Faggioli’s personal loyalty to the pope nor his faith.

We agree on many things. It is not necessarily “un-Catholic” to criticize the pope, and Mr. Faggioli sagely notes that “a-critical laudatores can do more harm than faithful and obedient critics of the bishop of Rome.” We indeed need to reject a Schmittian view of friend versus enemy, and Schmittian thinking is precisely what I wanted to rule out in my article.

So where do we disagree? Mr. Faggioli notes that my criticism “seems to be not about the style or content of my critique of Pope Francis’ approach to two particular issues, but about the very possibility of criticizing the bishop of Rome at all.” In fact, the opposite is true: I do not question the possibility of criticizing popes, but precisely the style and content of his critique.

The tendency to evaluate the papacy in terms of goals for change in the church is widespread, and it can lead to treating ecclesial developments as political contests.

I argued that part of the framing of his two articles, “the sense of loss, disappointment and even frustration,” among supporters of Francis can encourage a transactional attitude toward the papacy, one whereby a pope is judged primarily according to whether one agrees with the pope’s agenda. Yes, the papacy is a ministry: the pope should be the servus servorum Dei. But Catholics should not look toward popes as political officials from whom they can get something, however desirable and worthy those ends may be. That is why I suggested cultivating more attention to the office of the papacy.

I do not believe that Mr. Faggioli limits himself to a merely transactional relationship to the papacy. As his response indicates, his ecclesiology is far richer than that. But I am making a much simpler point than he suggests. The tendency to evaluate the papacy in terms of goals for change in the church is widespread, and it can lead to treating ecclesial developments as political contests. I tried to explain how his articles, framed in terms of disappointment, could reinforce that tendency. Indeed, it is just because this attitude toward the papacy is so ubiquitous as to distract from deeper points of ecclesiology that I thought it deserved comment.