What do we owe the office of the papacy? 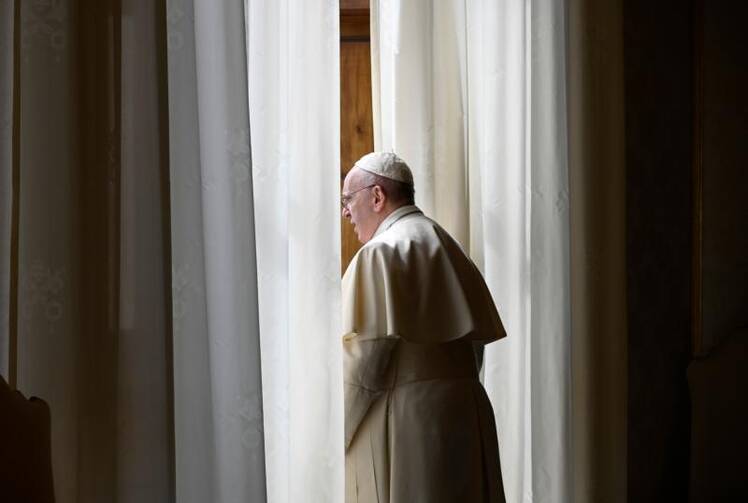 Pope Francis looks out a window from his library in the Apostolic Palace at the Vatican May 20, 2020. (CNS photo/Vatican Media)

Massimo Faggioli has created a stir with his provocative articles in La Croix about the limits and failures of Pope Francis’ pontificate. But Mr. Faggioli’s deepest concern has gone unanswered and, indeed, unnoticed by most commentators. I am grateful to Mr. Faggioli for his input, but the question he implicitly raises remains: What happens when Pope Francis disappoints his supporters?

On the surface, Mr. Faggioli’s articles concern what he sees as two recent failures of this papacy: Pope Francis’ “decision to ignore a suggestion by the Amazon bishops to ordain married priests, and his establishment of a new study commission on the female diaconate that does not appear in favor of ordaining women deacons.” Mr. Faggioli worries that such moments reveal a fundamental flaw in this papacy: “Francis’ very important spiritual insights lack a clear systematic structure that can be placed in a theological framework and an institutional order.”

Beneath that surface, however, is something more troubling. One could engage individual points of Mr. Faggioli’s argument and yet fail to respond to the sense of loss, disappointment and even frustration that underlies his analysis. Indeed, I think that pathos is the major takeaway from the articles, although I am not sure he intends it to be. Note the opening line: “There is a serious risk that Pope Francis is losing the support of the people who want to see him succeed.” And the next paragraph: “many of the strongest believers in his efforts at Church reform are becoming disillusioned.” And later: “But those in ecclecsial and theological circles that have supported Francis since the very start of his pontificate have felt somehow betrayed.”

Among a few prominent U.S. Catholics, the support shown for the papacy under popes St. John Paul II and Benedict XVI turned out to be conditional after 2013.

This sense of betrayal matters for many reasons. Among other things, it parallels how some critics of Francis assess the pontificate. Among a few prominent U.S. Catholics, the support shown for the papacy under popes St. John Paul II and Benedict XVI turned out to be conditional after 2013. Now Mr. Faggioli presents the possibility of other Catholics becoming “disillusioned” with this papacy because it has not delivered the goods they think have been delayed since the Second Vatican Council. In both cases, we see a transactional loyalty to the papacy: Catholics will support the pope if he enacts their agenda.

Mr. Faggioli’s disappointment also matters because it speaks to a common understanding of the church as a fierce battleground between partisans of a papal agenda and their enemies who need to be defeated. There is some of this language in the article, including in the opening paragraph, when Mr. Faggioli expresses the fear that the current pope will be unable to “keep the Church from falling into the hands of those who have set their face against change.”

This view of the church encourages apocalyptic thinking, as if our time is a unique kairos that must be seized lest all be lost—as though the kingdom of God stands or falls because of the actions of one person.

The papacy, like any office of leadership, should not be used for personal benefits.

A vocal minority is still a minority, but it has become easy to forget that there are also people of good faith with genuine concerns and questions about Francis’ papacy. There are also many Catholics of good faith who disagree with some of the policy prescriptions for which Mr. Faggioli advocates. What faces the U.S. church is a growing sense that the pope is a political official one supports when he favors your agenda or at least when he has the same enemies. What seems to be eroding is a sense that the office of the papacy itself deserves respect and reverence, regardless of who occupies it.

The papacy, like any office of leadership, should not be used for personal benefits; the position includes a responsibility to act for the common good that is to be received and to be passed on. The office is not a platform from which to carry out an agenda: It is itself an agenda.

Pope Francis in his words and actions is an eloquent and committed advocate for the unity and common good of the entire human family.

Mr. Faggioli notes that “Francis has been much more effective in deconstructing a culturally and historically limited ecclesiastical and theological paradigm than in building a new one.” In fact, Francis does not intend to give us a new paradigm. He intends to give us the church.

The notion of office as a position of trust can be easily romanticized, and I do not want to claim it says all there is to say about the popes. But I think it points to an imbalance. This is what I see as the trouble with much day-to-day analysis of the papacy. The rise of the global papacy, 24-hour news, the internet, social media and so on has trained us to bet our cards on change, novelty and movement. It keeps us hungry and impatient for still more change. But it is not good at cultivating our attention on what is enduring, what continues and sustains us across pontificates. Similarly, it is not so good at focusing on what unites the church. Rather, it emphasizes division and conflict.

But Pope Francis in his words and actions is an eloquent and committed advocate for the unity and common good of the entire human family. It would be a shame if partisans of his initiatives missed his chief ministry: a merciful, reconciling and visible sign of unity for the whole church.