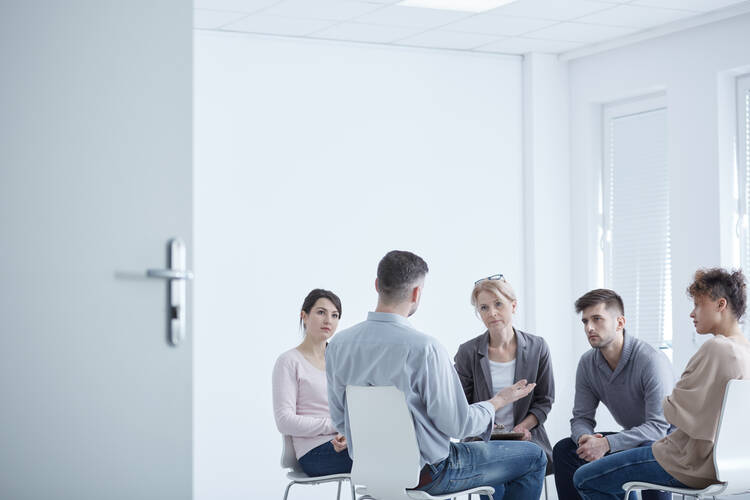 Group therapy is a common form of treatment for PTSD and may help sexual abuse survivors find support networks. (iStock/KatarzynaBialasiewicz)

Oceans of ink have been spilled about the church’s sexual abuse crisis, mostly focusing on the perpetrators and cover-ups. The magnitude of the crimes deserves attention and condemnation, but the victims should not be ignored. Their pain and long-term psychological damage cannot be undone by simply identifying and punishing the offenders, many of whom are already dead. Prayer, fasting, penance, forgiveness—some of the tools in the Catholic arsenal—are not enough to heal the wounded.

Beyond monetary settlements, little is publicly known of the victims, in part because of their understandable desire for privacy. But there is still a chance to acknowledge this community and discuss possible treatment methods that have helped others deal with trauma.

Just as we acknowledge and treat the post-traumatic stress of our veterans, long-suffering victims of sexual abuse could benefit from similar initiatives.

I have a unique perspective on this issue as I was in the seminary and ordained in the mid-1960s, along with several of the men later credibly accused of sexually abusing children in the Diocese of Buffalo. I went on to earn my doctoral degree as a counseling psychologist and have practiced and taught in central and western New York State. With the onset of the sex abuse crisis, I see my experiences with those accused former colleagues in a different light. I now understand that they used coded language to conceal their tendencies and that their issues were not easily treatable because they were incapable of truly understanding the heinousness of their actions.

Before leaving the priesthood and getting married, I was also a military chaplain in the Navy. In that role, as well as in my later work as a psychologist, I found that the post-traumatic stress disorder model of treatment could be helpful for survivors of sex abuse.

The church that betrayed their trust now reluctantly acknowledges responsibility and offers monetary settlements. Money is not enough, however. It does not erase memories that can cripple the development of healthy adult relationships. PTSD treatment has successfully been used by the Department of Veterans Affairs for both physical and psychic wounds, and there are analogs in that model that could make sense for treating victims of sexual abuse. Just as we acknowledge and treat the post-traumatic stress of our veterans who served in the armed forces, long-suffering victims of sexual abuse could benefit from similar initiatives.

Counseling strategies commonly used in PTSD treatment include desensitization techniques, utilized to reduce anxiety and phobic fears, and cognitive behavioral therapy, which can help to change obsessive memories. Using C.B.T., problem areas of thought and behavior can be identified and targeted. The advantages include its short-term commitment and the variety of tools appropriate for trauma victims. The purpose of such a program would be to identify cognitive dissonance in the form of recurring feelings of shame, grief, sadness, anger, depression and anxiety. Role-playing with a trainer could also be used to free up blocked thoughts and feelings. These therapeutic interventions can lead to the development of coping strategies such as relaxation techniques, reframing the trauma from a new perspective and “flooding” (exposure to a significant amount of traumatic information) to desensitize the trauma effect.

Cognitive behavioral therapy could be adapted to include prayer and meditation in order to foster further reflection on the faith of the individual survivor of abuse.

With the heavy burden survivors carry, it is also important to break through the sorrow and regain the ability to laugh. In many cases, group therapy in a supportive environment can also be useful. Participation in these groups can lead to further contact with additional support networks and agencies as recovery progresses.

Finally, medication may assist in targeting some of the associated behavioral difficulties. The clinical techniques used to treat PTSD could be expanded into a program tailored to the needs of sexual abuse victims, developing a medically effective and pastorally appropriate response to the crisis in the church.

These trauma wounds often have a spiritual dimension as well. For many victims, their belief system has been severely compromised. There is no infallible priest or safe space. Apologies by church officials are too little and too late to assuage the personal pain of many of the victims. In these cases, C.B.T. techniques could be adapted to include prayer and meditation in order to foster further reflection on the faith of the individual survivor of abuse.

PTSD programs should be subsidized by the church as part of its reparations but not set up in any church or church-related facility, as that would potentially reduce the effectiveness of treatment. Many survivors of sexual abuse no longer attend Mass or have any association with their former parishes as it is too psychologically wounding for them. An ecclesial-medical partnership would be ideal to reach out to victims while providing a nonthreatening forum.

To heal the church from the sex abuse crisis, we need apologies, not just policies
Colleen Duggan

How to move forward after the resignation of Buffalo’s Bishop Malone
John J. Hurley

The church could help create voluntary, introductory PTSD programs that would include triage for pre- and post-pubescent individuals, helping the most severely traumatized and helping those whose experiences of abuse were the longest or most severe. In many cases, time alone does not assuage the feelings of self-loathing and betrayal. The harmful after-effects can last for decades after the abuse, with the trauma remaining raw and debilitating. By creating a space simultaneously promoted by and protected from the church, an authentic attempt would be made to reconcile with those the church has hurt most.

It is not enough to say that faith is a gift and that God heals all wounds. After abuse, the task is to restore trust and move toward love. This process is ongoing, as no other person can know or judge what an individual feels, believes or fears—or when the healing is complete. An active laity should be empowered by its diocese to conduct outreach and provide support for victims, with the church leading the way in funding independent treatment programs. Now we have the chance to support healing in our community and offer a true Christian witness to all victims of the sexual abuse crisis. 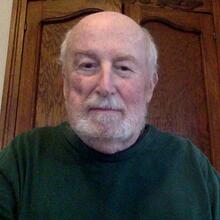 Dr. Edwin T. Collins is a psychologist who provided services for New York State school districts. He has also served as a missionary in Puerto Rico, a Newman Center chaplain at the State University of New York at Buffalo and an adjunct professor at Canisius College in Buffalo.