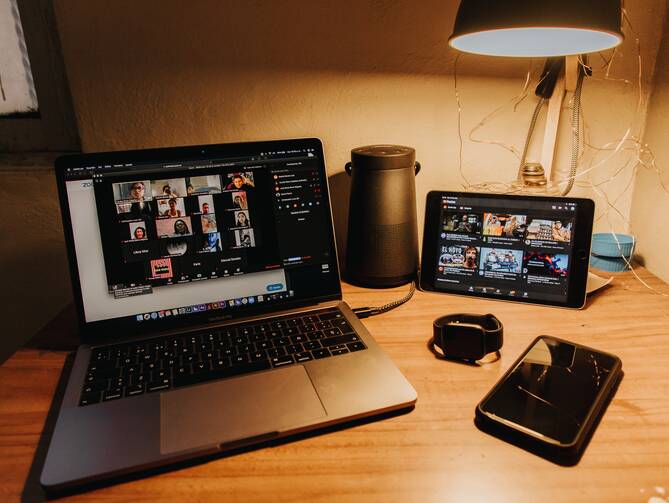 Helping parishes learn how to livestream. Writing letters. Phone calls to parents. Youth ministry has changed during the coronavirus pandemic, according to Christina Lamas, the executive director of the National Federation for Catholic Youth Ministry.

“Over these weeks, what I‘ve heard and seen across the nation are innovative ways youth ministers have stepped up their work to a different level,” she told America. ProjectYM and Life Teen, for example, are doing regular gatherings online, she said.

These efforts are meant to facilitate a feeling of belonging among young Catholics, Ms. Lamas said, noting a study by the Springtide Research Institute. The study found that, among young people aged 13 to 25, nearly a third struggle to connect with adults in their lives. More than a third said they did not have anyone to help them during times of stress.

Helping parishes learn how to livestream. Writing letters. Youth ministry has changed during the coronavirus pandemic.

Springtide also conducted a study during the pandemic of young adults aged 18 to 25. Nearly 60 percent of respondents said they felt scared and uncertain during this time of social distancing. Yet 35 percent said they experienced an increase in their faith, and 46 percent had started new religious practices.

“Young people are engaged,” Ms. Lamas said. “When they connect to their faith in God, they find hope.”

The communities that already had a strong relationship with their young people had less of a challenge transitioning to a digital community or remaining connected while staying at home, she said. But those who did not have that strong relationship established have had a harder time connecting.

“When we talk about coming out of the pandemic, it’s those parishes that were able to establish strong relationships that will thrive,” Ms. Lamas said.

With plummeting plate collections, a number of dioceses and parishes have also furloughed or laid off workers, including youth ministers, Ms. Lamas said. But through these challenges, youth ministers are still supporting each other.

Through these challenges, youth ministers are still supporting each other.

About 75 youth ministers from across the United States joined a weekly Zoom call last week, hosted by the National Federation of Catholic Youth Ministry. A number of youth ministers were calling for the first time. They broke up into small groups, using Zoom “rooms,” and then gathered to share their experiences in a larger group, where I was allowed to listen in.

Several trends emerged, including the need to delay confirmations and find new ways to connect, especially during the summer and with lower-income families.

Youth gatherings often have food, like pizza and cookies, in an effort to attract young participants, a feature that is no longer possible in digital gatherings. But food is still a topic of conversation, according to Liza Roach, a youth minister in the Diocese of Norwich, Conn. She shared how, during an online activity in her area, youth ministers asked young people to share what snack they would choose if they had to eat the same snack forever. . One of the girls said, “We can’t have snacks right now. My mom isn’t making any money.”

According to Vicky Hathaway, from the Diocese of Gary, Ind.,many parishes in her area count on volunteer youth ministers. Many of them are also teachers managing the change to online education. It has been a lot to juggle. “In Gary, a lot of youth ministers had to take care of their needs first,” she said.

Zoom calls have not been strictly “religious,” but are a time “to be silly and play games.”

She also said Zoom calls have not been strictly “religious,” but are a time “to be silly and play games.” Given the economic impact of the pandemic, she is expecting many families will not be able to afford to send their kids to more expensive events, like overnight retreats, once stay-at-home measures are lifted.

“Young people are stepping up in households, especially when their parents are essential workers,” said Katie Ziegler, a youth minister with the Archdiocese of Los Angeles. “They’re taking care of their younger siblings while their parents are at work, preparing meals, keeping things in order.”

Screen fatigue is an ongoing concern since young Catholics have been attending school through online classes, according to Abbey Schumann, from the Diocese of Jackson, Miss. She said youth ministers have to find the right way to connect. WhatsApp, for example, has been a more effective outreach in the Spanish-speaking community. But she, like many others, said youth ministry is relying heavily on the involvement of parents.

“We’re empowering the domestic church, sharing resources with the family on the homefront,” she said.

“In this bad situation, I’ve seen a lot of good.”

Parents are supporting youth ministry like never before, according to Paul Otero, from the Archdiocese of Miami, Fla. “In this bad situation, I’ve seen a lot of good,” he said. Mr. Otero is also anticipating social distancing challenges when the groups meet in person in the future.

Cynthia Psencik from the Archdiocese of New York said via the Zoom chat box that they have been developing resources for families to “unpack and study the Sunday Gospel,” including reflection questions, prayer and a video. They are offering the resources in English and Spanish.

Adam Ganucheau, director of youth and young adult ministry for the Archdiocese of Mobile, Ala., noted ongoing concerns going into the summer, including whether they will be able to hold Vacation Bible School and other events.

John DeLaporte, director of youth ministry and religious education in the Diocese of Jefferson City, Mo., shared that “many ministry leaders are rediscovering the power of simple pastoral care strategies and outreach to their kids and families (hand-written cards, phone calls, texts, etc).” He also shared ways to connect with kids and families on the margins, like livestreamed Mass, meals available for pickup, outside tables for holy water and “Catholic freebies, like holy cards and rosaries.”

Grace E. Fay, who does youth ministry at two churches in New York—Our Lady of Grace in Ballston Lake and St. Joseph in Scotia—is using Google forms with videos to share materials with families. She is keeping in mind screen fatigue.

“I am sending home information and resources for families to do together,” she said in an email to America. “Trying to bring them together in faith and use some inter-generational resources.”

The group youth ministers shared numerous resources of interest with each other, including:

If you have other helpful resources at this time, please share them in the comments.