Amid pandemic, Pope Francis prays for Europe and for all mothers on Mother’s Day

Amid pandemic, Pope Francis prays for Europe and for all mothers on Mother’s Day 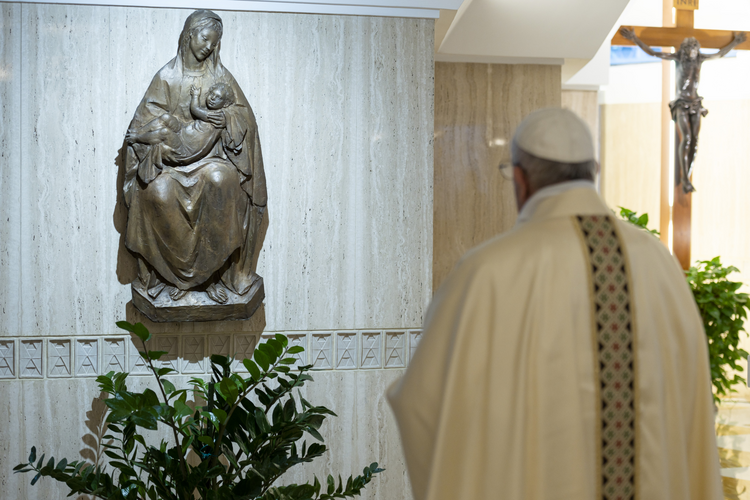 Pope Francis prays before a sculpture of Mary and the Christ Child at the end of Mass May 7, 2020, in the chapel of his Vatican residence, the Domus Sanctae Marthae. (CNS photo/Vatican Media)

Pope Francis prayed especially for Europe on Sunday, May 10, both at Mass and in his midday address, and told the leaders of the 27 member states of the European Union that they “are called to face together in a spirit of harmony and of collaboration the social and economic consequences caused by the [coronavirus] pandemic.”

He began by recalling at Mass this morning in the chapel of the Vatican’s Santa Marta guesthouse where he lives that Europe has celebrated two important anniversaries in these past days: the 75th anniversary of the end of the Second World War in Europe on May 8, 1945, and the 70th anniversary of the Declaration of Robert Schuman, on May 9, 1950, that inspired the foundation of the European Union.

Pope Francis also drew attention to Africa and recalled that 40 years ago, St. John Paul II spoke out about the plight of the people of the Sahel.

As he began Mass, he called on his virtual audience of more than one million people, who participate in the celebration every-day thanks to Vatican Media and the Italian state and Catholic television channels, to pray for Europe. “Let us ask the Lord for Europe, that it may grow in unity today, in that unity of fraternity that makes all its people grow in a unity in diversity,” he said.

Later, at midday, speaking from the library of the Vatican’s Apostolic Palace, he again drew attention to Europe, focusing especially on the European Union and again underlining the importance that it responds to the pandemic in a newfound spirit of solidarity and unity.

He recalled that yesterday was the 70th anniversary of the famous declaration by Robert Schuman, the French foreign minister, which, he said, “inspired the process of European integration, and allowed the reconciliation of peoples of this continent after the Second World War and the long period of stability and peace that we still enjoy today.”

Pope Francis underlined the importance of Europe responding to the pandemic in a spirit of solidarity and unity.

As the historical record shows, Schuman in his speech sought to prevent future conflict between France and Germany by proposing that the “Franco-German production of coal and steel as a whole be placed under a common High Authority, within the framework of an organization open to the participation of the other countries of Europe.” He then envisaged “the setting up of common foundations for economic development as a first step in the federation of Europe” that would “change the destinies of those regions which have long been devoted to the manufacture of munitions of war, of which they have been the most constant victims.”

Mr. Schuman’s speech inspired the establishment of the European Coal and Steel Community, which included the founding members of France, West Germany, Italy, the Netherlands, Belgium and Luxembourg. This was the first of a series of supranational European institutions that would ultimately become today’s “European Union.”

Francis congratulated the many young people who, inspired by the encyclical “Laudato Si’,” are planting more than one million trees in the Sahel region.

Pope Francis today prayed that “the spirit” of Schuman’s declaration “may inspire all those who have responsibility in the European Union” at this moment when “they are called to face, in a spirit of harmony and of collaboration, the social and economic consequences provoked by the pandemic.”

Since becoming pope, Francis has sought in many ways to promote greater unity and solidarity within the European Union and opposed the populist movements that seek to undermine it. He believes a strong and united European Union can play a major role in promoting peace and solidarity in the world. He is convinced that if the 27 member states can work together in harmony and solidarity, then they can not only help protect their own 445 million people from the virus and its socio-economic effects, but can also make a major contribution to world peace and assisting poor countries.

He has sought to encourage the leaders of the European Union countries on this path of unity and solidarity, as they seek to agree to a “recovery fund” for all states suffering from this pandemic. He did so forcefully in his Easter Message, “Urbi et Orbi,” on Easter Sunday. Moreover, in recent weeks, he has had private conversations by phone on these subjects with four European leaders: President Emmanuel Macron of Francis, Prime Minister Giuseppe Conte of Italy, President Andrzej Duda of Poland, and last week with Chancellor Angela Merkel of Germany.

In his address at midday today, Pope Francis also drew attention to Africa and recalled that 40 years ago today, St. John Paul II, on his first visit to Africa, spoke out about the plight of the people of the Sahel who were suffering from drought. Today, Francis congratulated the many young people who, inspired by the encyclical “Laudato Si’,” are planting more than one million trees in the Sahel region, thereby building “the Great Green Wall of Africa.” He expressed the hope that others would follow “this example of solidarity.”

Pope Francis concluded his midday address by recalling that Mother’s Day is celebrated in many countries today, including Italy: “I wish to remember with gratitude and affection all mothers, and entrust them to the protection of Mary, our mother in heaven.” He remembered too “the mothers who have gone to the other life and accompany us from heaven.” Then addressing his global audience, Francis asked people to spend a moment in silence and “let each of us remember our own mother.”

He then went from the library to the papal study window on the third floor of the Apostolic Palace, and looking out from the window on the empty St. Peter’s Square, he imparted his blessing to the world.

Provide feedback on this article
Join the conversation: Login or create an account
Before you can comment, you need to update your profile to include your first and last name, as required in our comments policy. Then reload this page and you'll be set up for commenting. Update your profile
Advertisement
More: Europe / Africa