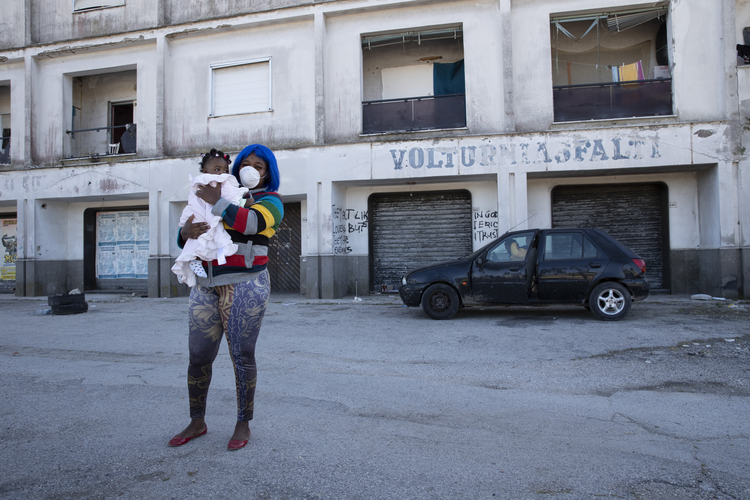 In this photo taken on Monday, April 27, 2020, a woman wearing a sanitary mask to protect against COVID-19 holds her daughter as she walks past a building in Castel Volturno, near Naples, Southern Italy. They are known as “the invisibles,” the undocumented African migrants who, even before the coronavirus outbreak plunged Italy into crisis, barely scraped by as day laborers, prostitutes and seasonal farm hands. (AP Photo/Alessandra Tarantino)

ROME (AP) — Migrant farm workers must be treated with dignity, Pope Francis said Wednesday, issuing his appeal as Italy weighs whether to legalize the workers amid a shortage of seasonal farmhands due to the coronavirus crisis.

Farm lobby groups and some Italian lawmakers and ministers have warned that the spring and summer harvests are at risk because Italy's usual seasonal workers, many of whom live in Eastern Europe, are stuck at home because of virus travel restrictions.

Francis said he had been struck by the impact of the COVID-19 crisis on migrant farm workers, who even before the pandemic lived hand-to-mouth with intermittent jobs that pay around 25 euro ($27) a day. While migrants are not testing positive in great numbers, their precarious, off-the-books work has dried up because of Italy's coronavirus lockdown.

"It is true that the current crisis affects everyone, but people's dignity must always be respected. That is why I add my voice to the appeal of these workers and of all exploited workers," Francis said at his weekly audience. "May the crisis give us the opportunity to make the dignity of the person and of work the center of our concern."

Agriculture Minister Teresa Bellanova, of the center-left Italia Viva party, has proposed giving temporary, six-month renewable residency permits to the migrants already in Italy who pick lemons, oranges and tomatoes but in wretched labor conditions. The proposal would also require farm owners to pay taxes for them and offer them contracts.

Bellanova, who says a failure to pass the proposal could force her to quit the government, has been backed by the interior minister and minister for the south, who also wants to legalize Italy's army of off-the-books foreign domestic workers who care for the elderly at home.

But the majority 5-Star Movement party is divided on the issue and Italy's right-wing opposition is strongly opposed to it.

Interior Minister Luciana Lamorgese told RAI state radio on Wednesday that within the government there was a general agreement that these unregistered migrant farm hands, as well as Italians who work in the underground economy, should be brought into Italy's legitimate workforce.

"We need to bring these workers out, not just to guarantee their rights but also because of the health security requirements at this time," Lamorgese said.

The numbers of the so-called "invisibles" in Italy are estimated at around 600,000, with about a third working in agriculture.

Matteo Salvini of the right-wing League Party, who articulated Italy's hard-line anti-migrant policy when he was previously interior minister, says an emergency 2 billion euro ($2.1 billion) fund is needed to save Italy's agriculture sector.

"The priority now is to help Italians pay their mortgages, bills and rent and save businesses. Surely, it's not thinking about an amnesty for thousands of clandestine migrants," he tweeted.