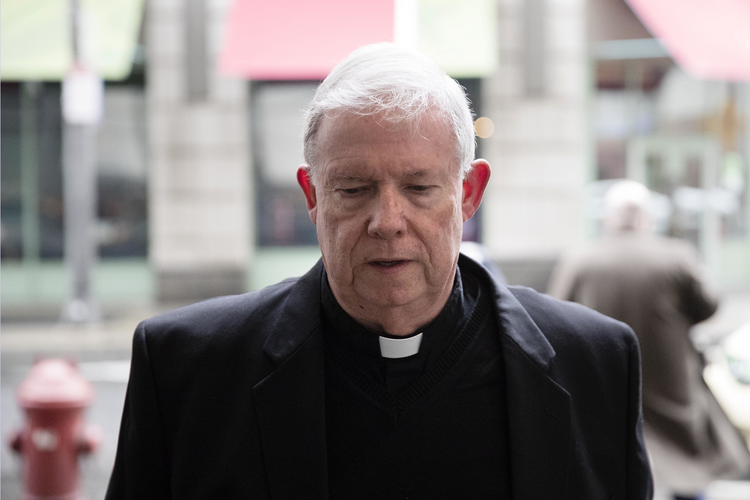 FILE – In this March 28, 2017, file photo, Monsignor William Lynn arrives for a preliminary hearing in his retrial of his child endangerment case at the Center for Criminal Justice, in Philadelphia. Monsignor Lynn is the first Roman Catholic church official ever charged with child endangerment over his handling of priest-abuse complaints. (AP Photo/Matt Rourke, File)

PHILADELPHIA (AP) — Nearly two decades after the Roman Catholic priest-abuse scandal exploded in the U.S. in 2002, only one church official has ever gone to prison over it: Monsignor William Lynn, the longtime secretary for clergy in the Philadelphia archdiocese.

After an appeals court found his sweeping 2012 trial flawed and his conviction was twice overturned, Lynn, 69, is set to be retried Monday on a single child endangerment count. Prosecutors contend he endangered children by transferring a known predator priest, after a year of inpatient therapy, to their parish without warning in 1993.

The landmark case, now trimmed to its core, will look nothing like the gut-wrenching, four-month trial that unearthed the church's "secret archives," drew more than 20 haunted victims to the witness stand and led the judge to conclude that Lynn allowed "monsters in clerical garb … to destroy the souls of children."

This time, a new judge plans to steer clear of the broader priest-abuse crisis that has cost the church an estimated $3 billion or more, and plunged dioceses around the world into bankruptcy and scandal.

"This is one defendant, one count of endangering the welfare of children, with one group of children," Judge Gwendolyn Bright said at a final pretrial hearing Wednesday. "We're not bringing in the so-called or alleged 'sins of the Catholic Church.'"

It's not even clear the jury will hear from a single victim this time. That's because the only accuser whose allegation falls within the statute of limitations — a policeman's son dubbed "Billy Doe" in court files — is an uncertain witness at best, whose credibility has long been challenged. Prosecutors do not plan to call him, although Bright said she may force their hand.

Instead, Assistant District Attorney Patrick Blessington plans to argue that Lynn endangered children simply by "placing a bomb" in their parish, whether or not it went off.

Bevilacqua Deposed in Philadelphia
From AP, CNS, RNS, Staff and other sources

Zach Hiner, the executive director of the Survivors Network of those Abused by Priests, said it was stunning that only Lynn and former Kansas City Bishop Robert Finn have faced charges over what some investigators call "the playbook" long used by dioceses around the country: hiding complaints in locked files, shuffling problem priests, paying victims confidential settlements and stonewalling police.

Finn received probation for a misdemeanor plea of failing to report a priest engaged in child pornography to authorities.

"It's not about getting vengeance and a long prison sentence. It's affirming that this is a crime and it did put children at risk," Hiner said Thursday. "And it can't happen again."

Lynn, who mostly comes to court by himself these days, served 33 months in state prison, of an initial three- to six-year sentence. Neither of the Philadelphia cardinals he served — including the powerful Cardinal Anthony Bevilacqua, who aggressively fought two grand jury investigations and died just before Lynn's first trial — were charged. Nor were the bishops above him in the local hierarchy.

It was Lynn's job at the archdiocese to recommend priest assignments from 1992 to 2004, and to review decades of complaints when the abuse scandal broke.

At trial, he said he compiled a list of 35 active priests who were likely "predators," including one named Edward Avery, in hopes Bevilacqua would act. Instead, he testified, the cardinal ordered the list destroyed, though a copy survived.

Bevilacqua, overruling Lynn's suggestion of a different parish, placed Avery at St. Jerome's in northeast Philadelphia in 1993. The policeman's son would later say he was molested there in about 1999, by Avery, another priest and his sixth-grade teacher.

"I did not intend any harm to come to (Avery's victim). The fact is, my best was not good enough to stop that harm," Lynn testified in 2012.

Avery, who took a plea offer before trial, later conceded that he had engaged in "horseplay" with young boys, but insisted that he never abused "Billy Doe." And a city detective on the case later signed an affidavit saying the evidence did not support the former altar boy's accusations.

"Why are they not calling that victim? That's the elephant in the room," Lynn's defense lawyer, Thomas Bergstrom, argued last week, saying there's no case without a victim. "I suspect they're not calling him because they don't believe he has any credibility."

Testimony from the young man, who had a long history of drug abuse and petty crime, sent two other men from St. Jerome's to prison in 2013: the Rev. Charles Engelhardt and teacher Bernard Shero. Both denied the sexual assault accusations. Engelhardt died in prison before his appeal played out, and Shero was released in 2017 after his conviction was overturned and he pleaded no contest to lesser charges in exchange for time served.

"Doe," who now lives in Florida, received a civil settlement from the Philadelphia archdiocese, which recently installed a new leader, former Cleveland Bishop Nelson Perez, a moderate cleric known for his focus on pastoral work.

"The Archdiocese looks forward to a final resolution in this matter," spokesman Ken Gavin said in an email Sunday.