Judge Pope Francis against the Gospel—not your ideology

Judge Pope Francis against the Gospel—not your ideology 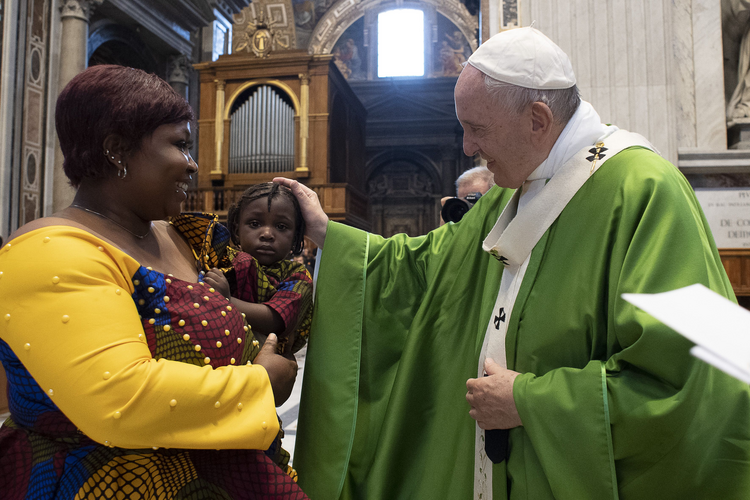 Pope Francis greets a woman and child during a July 8, 2019, Mass in St. Peter's Basilica at the Vatican commemorating the sixth anniversary of his visit to the southern Mediterranean island of Lampedusa. (CNS Photo/Vatican Media)

We are seven years into a papacy in which almost every moment has been a social-media-saturated global event. Yet one of its most iconic moments remains a somber moment on a remote Mediterranean island, far from the centers of power and wealth. Pope Francis traveled to Lampedusa only four months into his papacy to visit Italy’s southernmost island on the Mediterranean, where so many have died making the crossing from North Africa to Europe.

Many admire Francis. But has his teaching affected them? The evidence is mixed.

Pope Francis described his reasons for coming in his homily on the island, delivered a couple of weeks after an incident in which at least 10 migrants drowned off the coast of Malta:

When I first heard of this tragedy a few weeks ago, and realized that it happens all too frequently, it has constantly come back to me like a painful thorn in my heart. So I felt that I had to come here today, to pray and to offer a sign of my closeness, but also to challenge our consciences lest this tragedy be repeated. Please, let it not be repeated!

What strikes one in reading this is its sheer simplicity: Pope Francis saw a situation and responded to it. And yet, for all the simplicity of this gesture, it was deeply rich, embodying in all its profundity the heart of the Gospel.

As a political scientist, I am fascinated by how Francis preaches the Gospel in the public square.

As a political scientist, I am fascinated by how Francis preaches the Gospel in the public square. Popes have long addressed matters of real concern for our public life. But how can they do so without getting mired in partisan and ideological debates?

After all, given the deep divisions within modern politics, it is nearly inevitable that the church’s message will be interpreted in ideological terms. But the church does not want its message to be reduced to ideology, much less to be seen as one special interest pitted against others. So how does it guard against ideological capture?

The pope’s visit to Lampedusa reveals at least three ways in which Pope Francis aims to transcend the ideologies of our time: how he preaches the Gospel; his preference for actions over words; and his humility.

It is nearly inevitable that the church’s message will be interpreted in ideological terms.

First, Pope Francis preaches the Gospel. In preaching it, he has urged the church to “to concentrate on the essentials,” thus “giving direct expression to the heart of the Gospel” (“Evangelii Gaudium,” No. 37). The heart of the Gospel is Christ’s love and mercy, which is to say, “faith working through love.”

Pope Francis did not invent the “hierarchy of truths,” but he does deploy it uniquely: not simply as a criterion for the truth of our words, but for the goodness of our actions. The Gospel and church teaching call us to do many good things, but “there is one sign which we should never lack: the option for those who are least, those whom society discards” (“Evangelii Gaudium,” No. 193).

Preaching the core of the Gospel, then, means embracing a conversion from ideology and self-interest toward the love of God and neighbor. When Pope Francis says that the tragedy of migrants dying at sea “has constantly come back to me like a painful thorn in my heart,” he signals a need to be sensitive to love and mercy, and to want to respond to it. As Cardinal Michael Czerny, S.J., told Americaby email: “Responding with actions of welcoming, protecting, promoting and integrating isn’t ideological or partisan, it is how each of us should express our inner Good Samaritan.”

Pope Francis did not invent the “hierarchy of truths,” but he does deploy it uniquely.

In preaching the heart of the Gospel, Pope Francis challenges us: How does the “option for the least” animate our public life? There are many good policies that one might promote based upon the Gospel or Catholic social teaching. But this option must be the inspiration for all of them.

Second, Francis teaches with actions. When Pope Francis went to Lampedusa, he gave a catechism in the intimate connection between thoughts, feelings and actions. One ought not just know that immigrants and refugees require help. One ought to feel for those persons and thereby be moved to do something for them. As Austen Ivereigh notes in The Great Reformer, at Lampedusa Pope Francis was “asking for the grace to cry for our indifference” and to be moved to actively cultivate a new attitude. As Francis himself said: “I wish to offer some thoughts meant to challenge people’s consciences and lead them to reflection and a concrete change of heart.”

In an age of social media, actions can be transmitted instantaneously around the world. The media can be used to spread the Gospel through images. Actions particularly help us privilege realities over ideals, a key principle of Pope Francis’ thought. In September 2015, for example, he asked all “parishes, religious communities, monasteries and shrines throughout Europe” to “express the Gospel in a concrete way and host a refugee family.” In Cardinal Czerny’s words: “Here is the need. Let each one do something about it.”

Francis’ Petrine ministry is above all a presence, a way of being, a spirituality.

Francis also teaches with words. His emphasis on action does not undercut his theology. But what is most distinctive about this pope is the way he incarnates the Gospel message through his merciful and loving actions in the midst of God’s people. His Petrine ministry is above all a presence, a way of being, a spirituality.

This leads me to my third and final point. Francis is the pope, which puts him at the head of the College of Bishops and thus at the head of the global church. But he does not always present himself as an expert or ruler. He often, in fact, presents himself as a servant and friend: as a brother and companion. In going to Lampedusa, for instance, he referred to the people who had died in crossing the Mediterranean as “brothers and sisters” not in a pro forma way, but as someone who had placed himself in the midst of their suffering.

Francis does not always present himself as an expert or ruler. He often presents himself as a servant and friend.

Such a stance could not be more countercultural. When everyone wants answers to quell their fears and anxieties, ideologues invariably claim to have all the solutions. Pope Francis does not. Indeed, many of the “big ideas” of his papacy, including discernment; the four principles of “Evangelii Gaudium” (time is greater than space; unity prevails over conflict; realities are more important than ideas; and the whole is greater than the part); and even synodality assume that he does not have all the answers. Instead, he desires to empower the whole church in search of such answers.

In other words, Pope Francis most characteristically invites his listeners to share space with them, to join him in a process.

To be sure, Pope Francis has bigger goals in exercising his ministry than avoiding ideological capture. But in preaching the core of the Gospel, privileging action and acting in humility, Francis has given us a vision of someone who lives in and through the Gospel, and indeed in constant self-reflection about the pride and myopia that accompany ideology.

Many admire Francis. But has his teaching affected them? The evidence is mixed. Many of Pope Francis’ supporters and critics alike appraise his papacy in terms of their prior commitments. Some praise him for being the “liberal” pope they have been waiting for since the Second Vatican Council. Others castigate him for not fulfilling their vision of a supposedly “conservative” papacy in the mold of St. John Paul II and Pope Benedict XVI. But such visions of Francis refuse to be challenged by him. They refuse to join him in elevating the Gospel over ideology.

Pope Francis does not claim to be perfect, and he would be the first to accept fair criticism. It is important to see that the honeymoon of this papacy is over, and that we are called to move beyond the early enthusiasm to sober analysis of its lights and shadows. But he should not be judged in light of ideology. He should instead be judged, as we all will, in the light of the Gospel.