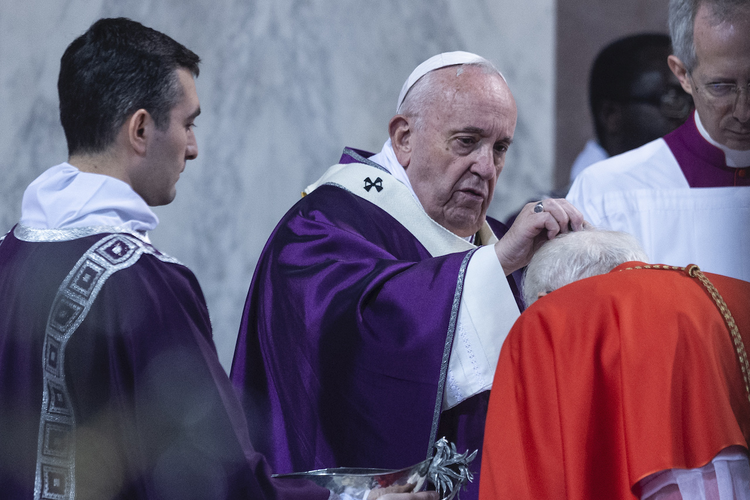 Pope Francis places ashes on the head of a cardinal as he celebrates Ash Wednesday Mass at the Basilica of Santa Sabina in Rome Feb. 26. (CNS photo/Cristian Gennari, pool)

Pope Francis appeared at his study window on this cold and windy Sunday, March 1, to greet and pray with pilgrims in St. Peter’s Square, but at the end of the audience he announced that “sadly” he will not join senior Roman Curia officials at the weeklong spiritual exercises at a retreat house in Arricia, outside Rome, because of his “cold.”

It was his first public appearance in four days, and the hundreds of pilgrims and Romans gathered in the square applauded when he appeared. He has been out of public view since the Ash Wednesday audience and liturgy, during which he caught what the Vatican spokesman, Matteo Bruni, called “a light indisposition,” and others called “a cold,” as did Francis today.

It was the pope’s first public appearance in four days.

As Francis, 83, stood at a study window of the papal apartment on the third floor of the Vatican’s Apostolic Palace, the wind caused the curtains behind him to blow. It must have been cold where he was standing at that height, but he looked well and was clearly happy to be back in contact with people.

He spoke with a strong, clear voice, nevertheless he coughed a number of times, revealing that he has still not fully recovered from the cold, as he himself admitted when he asked for prayer for himself and his collaborators who are beginning a retreat this evening, which lasts until March 6.

Addressing the pilgrims in the square he said, “I ask a remembrance in your prayers for the Spiritual Exercises of the Roman Curia that will begin this evening at Ariccia. Unfortunately, a cold obliges me to not participate this year, but I will follow the exercises from here. I will unite myself spiritually to the [Roman] Curia, and to all persons that are living moments of prayers, by doing the spiritual exercises at home.”

After commenting on the Gospel story of the temptations of Jesus and praying with the pilgrims in St. Peter’s Square, Pope Francis expressed his concern for the thousands of refugees fleeing from war in these days. “I am saddened at the news of so many displaced people, many men, women and children driven away because of war, so many migrants seeking refuge in the world, and help.” Though he did not mention any place in particular, the fact that he added that “the situation has become much stronger” or worse in recent days would appear to be a reference to the thousands of people fleeing from fighting involving Turkish and Syrian forces [with Russian backing] in the province of Idlib, north-western Syria.

Pope Francis cancelled his public audiences for the third consecutive day, Feb. 29, but celebrated morning Mass as usual in Santa Marta, the Vatican guesthouse where he lives, and he also held all his scheduled private audiences.

The Vatican released a photo of his meeting with His Beatitude Svistoslav Shevchuk, the Major Archbishop of the Greek Catholic church in the Ukraine. The pope has known the archbishop from his days in Buenos Aires, and the two speak to each other in Spanish.

The pope held his weekly Saturday morning meeting with Cardinal Marc Ouellet, the prefect of the Congregation for Bishops, regarding the appointment of new bishops. He also gave private audiences to two nuncios: Archbishop Celestino Migliore, whom he recently appointed as nuncio in France, and Archbishop Joseph Spiteri, the nuncio in the Lebanon, a country that is in a difficult situation.

At the same time, the Vatican announced that he had cancelled the public audiences scheduled for today, including one much anticipated one with the leadership of the Legionaries of Christ and Regnum Christi, but his speech was published.