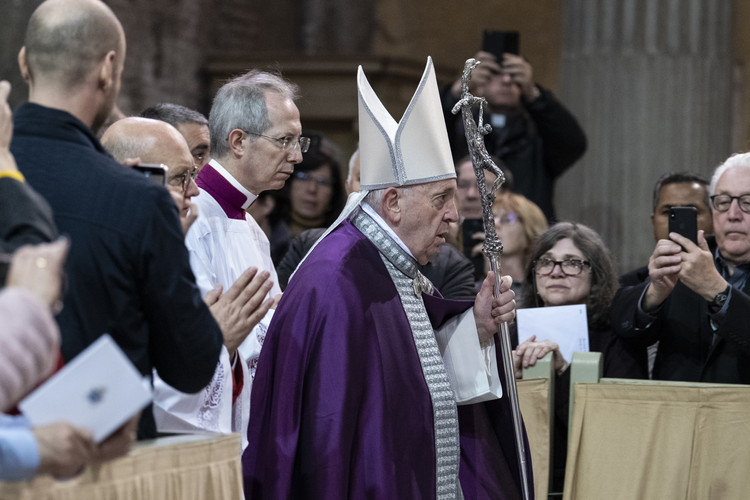 Pope Francis is “feeling slightly unwell” (“leve indisposizione” in Italian), he has a cold and cancelled his meeting with Roman clergy at the Basilica of Saint John Lateran scheduled for this Thursday morning Feb. 27, the Vatican spokesman, Matteo Bruni, said in a statement given to the Vatican press corps shortly before the event was due to happen.

“He preferred to remain in the area close to Santa Marta,” the Vatican guesthouse where he lives, “but his other meetings proceed regularly,” Mr. Bruni added. His words were intended to downplay the concern that his condition might be in any way serious or that he could have contracted the coronavirus that has hit so many people in Italy—one of the countries with the most victims after China, South Korea and Japan.

The pope’s spokesman tried to downplay the concern that his condition might be in any way serious.

The 83-year old pope celebrated Mass as usual in the chapel of Sant Marta this morning and held some private audiences. Yesterday, however, he held his weekly public audience in Saint Peter’s Square, instead of indoors as has been the case up to now. He kissed some children, and then as he usually does, he shook hands with several people. Last evening he traveled across the city by car to the Aventine hill to participate in the traditional Ash Wednesday procession and to celebrate Mass in the church of Santa Sabina, which was attended by many cardinals and bishops, as well as members of the Dominican order who are in charge of that church and lay faithful. His voice then seemed to indicate that he was catching a cold, and this morning’s news would seem to confirm that. When the ceremony ended last evening, it was very cold, wet and windy, so he could have suffered the ill-effects of that too.

News of the pope’s “indisposition” naturally sparked some concern in Vatican circles and in Rome as it came at a time when 474 people in Italy have already contracted the coronavirus, including several children, and 12 people (most of them elderly) have died as a result. It should be remembered, however, that the virus has been mainly limited to the provinces of northern Italy, where schools, universities as well as the Milan cathedral and La Scala opera house have been closed, the Venice carnival was stopped, and there was panic buying of food in supermarkets. Masses have been cancelled in the archdiocese of Milan and some other places, but not so in Rome.

The virus has so far not reached to Rome, except for three Chinese visitors who were hospitalized and subsequently cured. Public services, schools, universities and churches are open and functioning normally, but not surprisingly there was a visible decrease in the number of people attending the papal audience yesterday. Romans are on the alert, however, concerned that the virus could come here too.