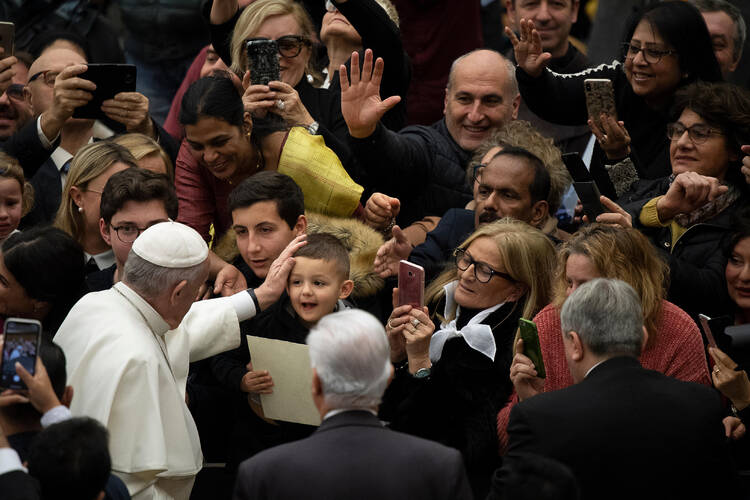 Pope Francis called on Christians not only to show hospitality to all other Christians of different traditions by recognizing “that they are truly our brothers and our sisters in Christ,” but also “to work together to show the love of God, revealed in Jesus Christ,” to the many migrants in today’s world who are fleeing from violence, war and poverty.

Addressing thousands of pilgrims from many countries at the weekly public audience in the Vatican’s Paul VI audience hall, Francis recalled that “hospitality” is the theme for this year’s Week of Prayer for Christian Unity, which began on Jan. 18 and ends on Jan. 25.

He noted that the theme was developed by the Christian communities of Malta and Gozo that took their cue from chapter 28 of the Acts of the Apostles, which recounts St. Paul’s dramatic experience of being shipwrecked along with 260 other fellow passengers on the small island of Malta and how they were given hospitality by the inhabitants there. He recalled that St. Paul repaid their hospitality by healing many sick people.

This year, the Week of Prayer for Christian Unity is dedicated to the theme of hospitality. #GeneralAudience

“Hospitality is important, and it is also an important ecumenical virtue,” the pope told the pilgrims from all continents at the audience. He referred to two dimensions of the hospitality that is required of Christians: first, toward other Christians and, secondly, to the many migrants in today’s world.

“First and foremost,” he said, hospitality means “to recognize that the other Christians are truly our brothers and our sisters in Christ,” whether they are Protestant, Orthodox or whatever denomination they belong to. “To welcome Christians of another tradition means, in the first place, to show the love of God to them—our brothers and sisters, and it also means to welcome that which God has done in their lives.”

“Ecumenical hospitality demands the willingness to listen to others, paying attention to their personal stories of faith and to the history of their community, a community of faith with a different tradition to ours,” Francis said.

“Ecumenical hospitality involves the desire to know the experience that other Christians have of God and the expectation to receive the spiritual gifts that come from them,” he continued.

He recalled that once in his homeland, Argentina, when evangelical missionaries arrived, a group of Catholics set fire to their tents. But, he said, “that is not Christian! We are all brothers and sisters and we must give hospitality to each other.”

Then, referring to the need to show hospitality to the many migrants in today’s world, he recalled that just as at the time of St. Paul, so too today the sea continues to be “a dangerous place” for those who travel by it. “Throughout the whole world, men and women—migrants—face dangerous journeys to flee violence, to flee from war, to escape from poverty.” But like St. Paul and his companions, “they experience the indifference, the hostility of the desert, the rivers and the seas…. And many times, they do not allow them to disembark in ports.”

Pope Francis told the thousands of pilgrims from many lands that “sadly too, they sometimes encounter even worse hostility from people. They are exploited by criminal traffickers—today! They are treated as numbers and a threat by some governments. Today! Sometimes, they are rejected like a wave toward the poverty and the dangers from which they have fled.”

According to the United Nations’ IOM migration report for 2020, there are some 272 million international migrants in the world today (3.5 percent of the world’s population); two-thirds of them are looking for work, and the rest are fleeing conflict, violence or climate change. 47.9 percent are women and 13.9 percent children.

Francis called on all Christians “to work together to show to the migrants the love of God revealed in Jesus Christ,” and said, “we can and we must give witness that there is not only hostility and indifference, but that every person is precious for God and loved by him.”

Noting that “the divisions that still exist among us Christians prevent us from being fully the sign of the love of God,” Pope Francis said, “to work together to live ecumenical hospitality, especially towards those whose life is more vulnerable, will make all of us Christians – Protestants, Orthodox, Catholics, all Christians – better human beings, better disciples and a more united Christian people. Moreover, it will bring us closer to unity, which is the will of God for us.”

Explainer: What is the global response to the refugee crisis?
Kevin White, S.J.

Pope Francis then added a message of greeting to “the millions of men and women in the Far East and in various parts of the world who will celebrate the Lunar New Year” that starts on January 25.

He concluded his message by inviting everyone “to pray for peace, for dialogue and for solidarity between nations” which, he said, “are gifts that are more necessary than ever in today’s world.”