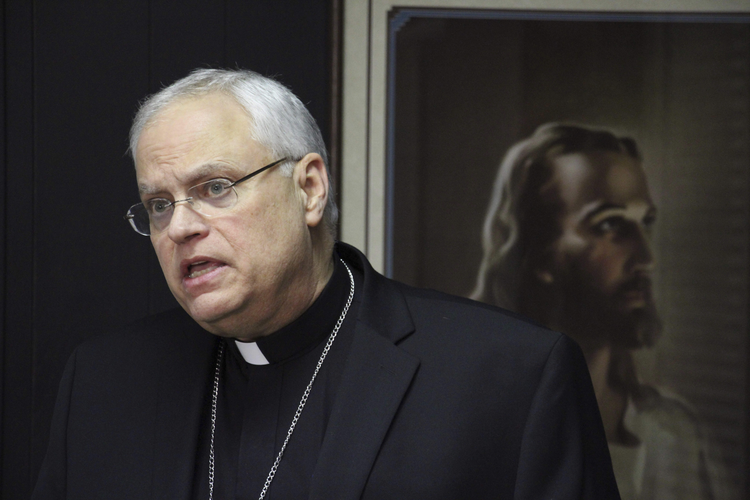 Catholic Bishop Andrew Bellisario speaks at a news conference Thursday, Jan. 16, 2020, in Anchorage, Alaska, announcing a review commissioned by the Archdiocese of Anchorage found credible evidence of sexual misconduct by 14 people who served in the archdiocese dating to 1966. (AP Photo/Mark Thiessen)

JUNEAU, Alaska (AP) — A review commissioned by the Archdiocese of Anchorage found credible evidence of sexual misconduct by 14 people who served in the archdiocese dating to 1966, a church leader announced Thursday.

The findings were made by a commission that the archdiocese said included a former police chief and two former prosecutors, one of whom is also a retired judge. The commission was charged with reviewing personnel files of "clerics and religious men and women" who served in the archdiocese dating to 1966, as well as reviewing allegations of sexual misconduct of lay volunteers and employees reported to the archdiocese.

Half of those identified as credibly accused are now dead, the report states.

The report, which had limited details, included allegations of sexual misconduct involving vulnerable adults or those younger than 18 and viewing child pornography. Allegations against four of the 14 individuals identified came while serving in another diocese, according to the report.

Bishop Andrew Bellisario, at a news conference in Anchorage, addressed the victims, saying it "is with great shame that I stand here today, as a representative of the church, to offer this apology to you."

The church is trying to be as transparent and accountable as possible and sees the release of names as "an opportunity for people to come forward for healing," he said.

A 2018 announcement citing creation of the commission said the final report could include findings of any individuals who, "through gross negligence, failed to adequately respond” to sexual misconduct. Bellisario said no such findings were made.

"However, I think we all know ... that if things would have been done the way we do them today, as opposed to the way they did them in the '70s, the '80s and the '90s, I think this list would be very, very small, possibly, maybe, even nobody on that list, which would be our goal," he said.

Maria Bahr, a state Department of Law spokeswoman, said the information in the report, which the department received Thursday, alone is not enough to evaluate any particular case, "especially when many of these cases appear to be decades old."

Frontline on Sexual Abuse in Alaska

The department "will coordinate with our law enforcement partners concerning any additional information that should be requested from the Archdiocese in order to properly assess the viability of any potential criminal investigations," she said.

The definition of vulnerable adult used for the report is someone who is infirm, unable to exercise personal freedom "even on occasion and has a limited capacity to understand or resist the crime."

Cowgill and McDonald are among the four the commission determined had credible evidence of misconduct while serving in another location, along with Tim Crowley and James Murphy. Cowgill, who died in 2000, was named in a review previously released by the Diocese of Juneau.

According to the report,

—Astruc, who died in 2002, was accused of sexual misconduct involving a minor and vulnerable adult; the report includes the date of 1976;

—Oosterman, who died in 2011, was accused of sexual misconduct involving a minor, 1978;

— Cowgill was accused of sexual misconduct involving minors, 1956-1964; and

—McDonald, who died in 1988, was accused of sexual misconduct involving a vulnerable adult, 1976.

Crowley declined comment Thursday. A man who answered a listing for James Murphy did not respond to the allegations. Attempts by The Associated Press to reach the other five men Thursday were not immediately successful.

According to the report:

—Allie, retired in 2000, was accused of sexual misconduct involving a vulnerable adult around 1986;

—Hornick, dismissed as a priest in 2014, was accused of sexual misconduct involving minors and vulnerable adults, 1970s-2000s;

—Crowley, laicized in 2015, was accused of sexual misconduct involving a minor, 1980s; and