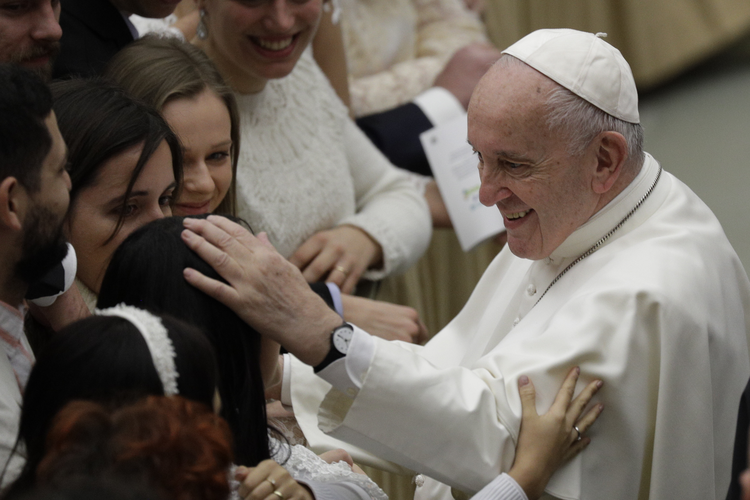 Pope Francis salutes the faithful at the end of his weekly general audience at the Vatican, Wednesday, Jan. 8, 2020. (AP Photo/Gregorio Borgia)

VATICAN CITY (AP) — Pope Francis cautiously waded back into the crowds on Wednesday after video of him swatting away the hand of a pilgrim who grabbed him went viral and sparked a papal apology.

Francis gingerly agreed to a nun's request for a kiss on the cheek, but said he would only approach her if she didn't bite.

The moment occurred as Francis entered the Vatican auditorium at the start of his weekly general audience, when the pope usually greets well-wishers lined up behind barricades. Francis kept his distance when the sister first asked for a papal kiss, but then negotiated the terms: "I'll give you a kiss, but keep calm. Don't bite!" he said.

The woman agreed and Francis then bent in to give her a peck on the cheek. His gesture prompted the woman to do a little jig of joy and sparked cheers from those around them.

Francis' caution was perhaps a reflection that he was still rattled by the New Year's Eve hand-grab incident, as well as a reflection of a well-founded concern about the enthusiasm of religious sisters, who tend to go a bit wild when near the pope.

Francis apologized during his New Year's Day blessing for having lost his temper the previous evening when a woman aggressively grabbed his hand as he greeted pilgrims in St. Peter's Square.

Video of him angrily swatting away her hand went viral, with critics complaining it showed his short temper but others noting the 83-year-old pope, who suffers from sciatica and walks with difficulty, could easily have been toppled over by the aggressive grab.

It was by no means the first time an overly enthusiastic pilgrim had lunged for the pope, nor was it the first time a pope had reacted impatiently to a perceived intrusion: While Twitter was awash in video replays of Francis, other footage resurfaced of then-Cardinal Joseph Ratzinger, the future Pope Benedict XVI, angrily swatting away the hand of a reporter asking about notorious pedophile, the Rev. Marcial Maciel.