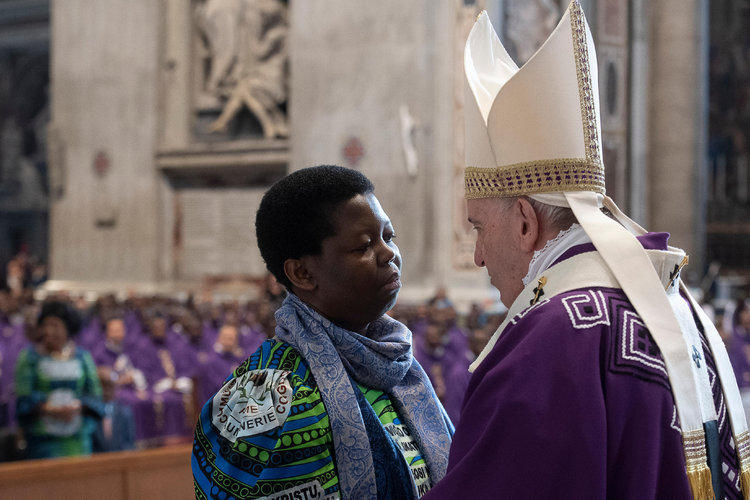 Pope Francis greets Sister Rita Mboshu Kongo, a theologian and member of the Daughters of Mary Most Holy, during a Mass for the Congolese Catholic community in Rome in St. Peter's Basilica at the Vatican Dec. 1, 2019. The Mass included elements of Congolese culture. (CNS photo/Vatican Media)

Pope Francis sees the "masculine monochrome" of leadership and influence in the Catholic Church as "a defect, an imbalance" that harms the church itself and its mission of proclaiming the Gospel to the world, said the lead article in a Vatican magazine.

"Women and Francis" is the theme of the January 2020 issue of Women-Church-World, a monthly supplement to L'Osservatore Romano. It was released Dec. 28.

The 24-page magazine opens with "The urgency of overcoming a monochrome church," an article by Stefania Falasca, a Vatican correspondent for the Italian bishops' daily newspaper, Avvenire.

Taking Pope Francis' repeated remarks about the church "being feminine" and about how the church cannot be itself without the presence, ministry, input and vision of women, Falasca argues that for the pope, the question of women and the church goes to the heart of one's vision of the church and what it means to say the church is a communion.

In 1959, Bishop Leon Uriarte Bengoa of San Ramon, Peru, suggested the approaching Second Vatican Council discuss the restoration of the permanent diaconate and the institution of "deaconesses," according to an article in the magazine by Serena Noceti, a professor at a Catholic school of theology in Florence, Italy. She said Bishop Uriarte cited a need for more ordained ministers to preach the word of God and administer the sacraments in remote areas of the world.

The question came up again at October's Synod of Bishops for the Amazon, she noted.

"While safeguarding the apostolicity of the faith," Noceti wrote, "the salvation of souls and the good of the church" often has led to changes, including in the types of ministries and the theological understanding of them.

"In the framework of the vision of ordained ministry handed on by the Second Vatican Council, systematic theology today is called to evaluate the possibility of ordaining women deacons," she said.

In another article, Marinella Perroni, a biblical scholar at Rome's Pontifical University of St. Anselm, noted how Pope Francis has said on occasion that women do not need simply more "functions" in the church, but that the church needs a "theology of the woman."

She said if she had a chance to discuss the issue with the pope, she would point out how, throughout history, male theologians -- from Tertullian to St. John Paul II -- have spoken about women. Their comments have varied greatly, she said, but they always express "the need and perhaps the pretext of having something to say about women."

"In addition, more than once someone even has suggested dedicating a Synod of Bishops to the theme of the woman," she said, admitting that she and many others think that would be a bad idea.

"Isn't the unstoppable exodus -- as silent as it is painful -- of many women who have left the churches in the few past years a strong word, a cry that the women launched because they do not want people to keep talking about them, but want to be listened to?" she asked.

In the church, she said, everyone has a different role and different gifts to bring, but all the baptized are fully members of the church and have an equal right to share that with the wider community without one group being the "subject" of the conversation and the other being the "object" of it.

Cindy Wooden - Catholic News Service
@Cindy_Wooden
Show Comments ()
Join the conversation: Login or create an account
Before you can comment, you need to update your profile to include your first and last name, as required in our comments policy. Then reload this page and you'll be set up for commenting. Update your profile
Show Comments ()
Comments are automatically closed two weeks after an article's initial publication. See our comments policy for more.