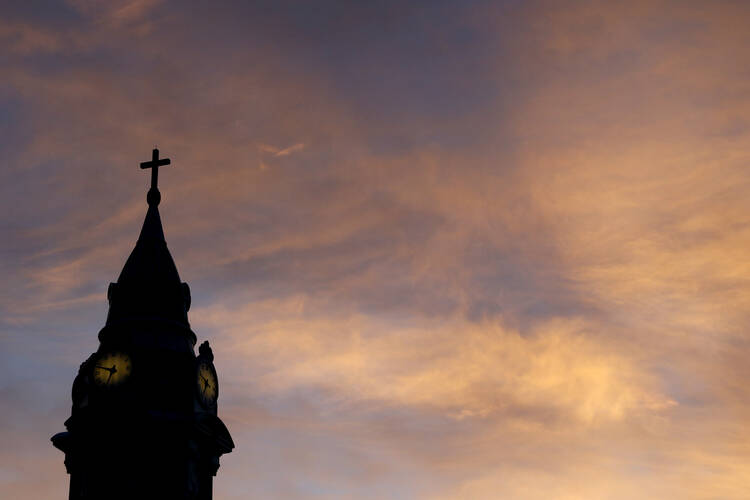 Clouds are lit by the rising sun over St. Augustine Roman Catholic Church in Philadelphia in this 2015 file photo.  (AP Photo/Julio Cortez)

Pennsylvania's  Roman Catholic dioceses have paid nearly $84 million to 564 victims of sexual abuse, a tally that's sure to grow substantially in the new year as compensation fund administrators work through a backlog of claims, according to an Associated Press review.

Seven of the state's eight dioceses launched victim compensation funds in the wake of a landmark grand jury report on sexual abuse by Catholic clergy. The funds were open to claims for a limited time this year. They are independently administered, though each diocese set its own rules on eligibility.

To date, the average payout across all seven dioceses has exceeded $148,000—a fraction of what some adult victims of childhood abuse might have expected from a jury had they been permitted to take their claims to court. Under state law, victims of past abuse only have until age 30 to sue.

"These are all time-barred claims, so it's not going to be the kind of numbers one sees in a courtroom," said Camille Biros, who helps administer compensation funds for the Archdiocese of Philadelphia and dioceses in Pittsburgh, Allentown, Erie and Scranton.

Lawmakers recently agreed to begin the lengthy process of amending the state constitution to allow a two-year window for civil suits otherwise barred by the statute of limitations, but there's no guarantee that effort will bear fruit.

Childhood abuse victim David Zernhelt was unwilling to gamble that state lawmakers will follow through and give people like him access to the courts. Compensation fund administrators for the Diocese of Allentown recently offered $400,000 to Zernhelt, and he accepted it.

"It doesn't make me rich," said Zernhelt, 45, of Easton. "It creates a positive starting point for me. I can try to make my life a little bit better and put this behind me."

The AP does not typically name victims of sexual abuse, but Zernhelt agreed to be identified.

Together, Allentown and the four other dioceses that hired Biros and veteran claims administrator Kenneth Feinberg to run their funds have received more than 1,500 claims, of which about 500 have been reviewed. Of those, 41 claims were rejected for lack of evidence or because they didn't meet eligibility criteria, as some dioceses bar claims against religious order clergy, Catholic school officials and other lay leaders.

"We try to be consistent with the claims in terms of the nature of the abuse, how long it went on, the age of the child, the effect of the abuse. We consider all that and use our judgement to determine the settlement offer," Biros said. "We want to make sure everybody is treated as consistently as possible."

She said a torrent of claims arrived in the week leading up to a Sept. 30 deadline. Biros expects it will take at least through June, and probably longer, to work through the backlog.

The dioceses agreed to pay victims after the grand jury concluded that more than 300 predator priests had molested more than 1,000 children since the 1940s — and that church leaders systematically covered it up.

Zernhelt applied to the compensation program and told the fund administrator a horrific story of abuse.

He said the Rev. Thomas Kerestus assaulted him two to four times a week for five years beginning when Zernhelt was 13. Zernhelt said that he and his family reported Kerestus—who died in 2014 and is named in the grand jury report—but that the diocese swept it under the rug. He said he was sexually abused by a second man, Gerald Royer, a defrocked priest also named in the report.

"It caused a lot of emotional pain, a lot of depression, a lot of PTSD," Zernhelt said. "I felt like I was a survivor on the Titanic who was crying out for help for that boat to rescue me, and in the end the boat never came."

The settlement represents a chance at a fresh start, but Zernhelt said the compensation funds also allow the dioceses to get off easy.

"I feel that it's a shield for the church to get a discount on paying the victims," he said.

Indeed, average payouts vary widely from diocese to diocese. While the five dioceses whose funds are administered by Biros and Feinberg have averaged nearly $169,000, two other Pennsylvania dioceses have paid much less.

Greensburg has paid about $82,000 per victim, while Harrisburg has paid about $114,000, according to data supplied by the dioceses. The Diocese of Altoona-Johnstown has no compensation fund, saying it can't afford one after spending $15.7 million on an earlier program to assist clergy abuse victims.

Richard Serbin, an attorney who has long battled the Catholic Church on behalf of victims, has taken the compensation funds to task for another reason: They allow the church to avoid open court and thus a case-by-case public airing of its dirty laundry.

But some of his clients have accepted the church's offer.

"Some did it because they want to try to move forward and are looking to heal, and they feel this will be of assistance, and for those clients I do think it's good, and I recommend they take it," he said. Others, he said, "are in desperate financial situations, and they needed the money."

Michael Rubinkam - Associated Press
Provide feedback on this article
Join the conversation: Login or create an account
Before you can comment, you need to update your profile to include your first and last name, as required in our comments policy. Then reload this page and you'll be set up for commenting. Update your profile
Show Comments ()
Comments are automatically closed two weeks after an article's initial publication. See our comments policy for more.