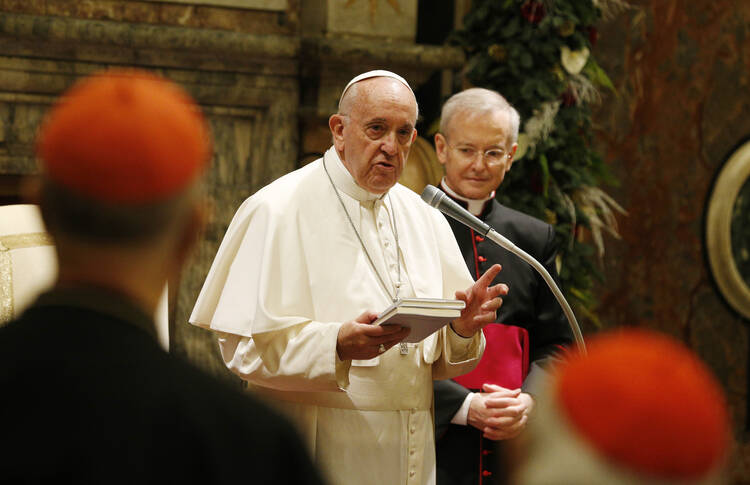 Pope Francis speaks during his annual audience to give Christmas greetings to members of the Roman Curia at the Vatican Dec. 21, 2019. (CNS photo/Paul Haring)

On Saturday, Pope Francis gave his annual Christmas speech to the Roman curia, which in past years has been the time that the pope speaks very clearly about where he thinks the curia needs improvement. In 2014, Pope Francis used his Christmas address to lead the curia through an examination of conscience, pointing out what he called the “curial diseases” of careerism, gossip, rivalries, and so on. In years since, he has spoken on the need for ongoing reforms and updated his collaborators on his restructuring of the Vatican bureaucracy.

Pope Francis tells Roman Curia: Do not fear change, it is in the nature of the missionary church
Gerard O’Connell

This year, the pope’s talk focused on the need to fight rigidity and be open to change. He quoted St. John Henry Newman, canonized this year, who famously wrote about the way that doctrine develops and how change is natural and important both in human life and for the church. Francis also warned against rigidity which comes from a fear of change.

On this week’s episode of “Inside the Vatican,” Gerry and I talk about why the pope chose this theme for his speech, who he spoke to, and how these Christmas addresses fit into the pope’s larger effort to reform the Roman curia.

@InsdeVaticanPod
Show Comments ()
Join the conversation: Login or create an account
Before you can comment, you need to update your profile to include your first and last name, as required in our comments policy. Then reload this page and you'll be set up for commenting. Update your profile
Show Comments ()
Comments are automatically closed two weeks after an article's initial publication. See our comments policy for more.