The types of women who veil at Mass 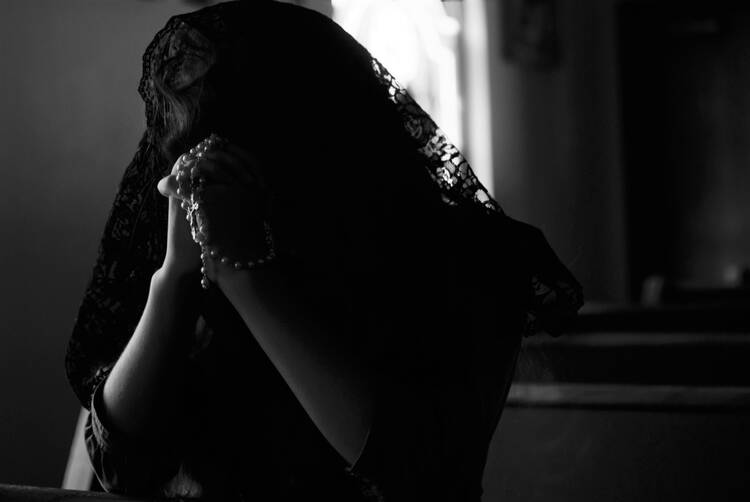 Photo by twinsfisch on Unsplash

Imagine you are a millennial Catholic woman. You are at Mass, kneeling at the altar rail, waiting to receive Christ in the Eucharist. As you peer at the high altar through your lace mantilla, your heart burns with love.

And into your back burns the searing hot gaze of that weird dude in the pew behind you—the one who once cornered you after confession to let you know your modesty is smoking hot.

I am not making this up. That really did happen to a friend of mine. And, based on a recent meme posted to the Facebook group Traditional Catholic Millennials, her experience may not be unique. The group, which has over 20,000 members, posted a photo of three young women kneeling at an altar rail, veiled and apparently in prayer. The emoji-littered meme exclaimed:

Looking for a good husband? [shrugging emoji] Want to be irresistible to Catholic men?? Simple!

And the photo description read:

Because God forbid there be one hour per week when a woman is not forced to deal with the consequences of whether or not men find her hot.

The cognitive dissonance was jarring if you are not familiar with the bizarre netherworld of outré ultra traditionalists, where pants are verboten because their pockets form a visual arrow pointing to the crotch; where working outside the home is stealing time from your family, but incessantly tweeting about collarbones and hemlines is doing God’s work; and where feminine modesty is a great way to advertise your...modesty.

If this makes any sense to you, I am telling it wrong.

The good news is, it does not make sense to a good many traditionalists, either, millennial or otherwise, and they found the “smoking hot veil” meme revolting and ridiculous. Lily Wilson herself, the founder of Veils by Lily, the website that was promoted in the post, told the group to take the meme down, which they eventually did.

Ms. Wilson thinks the contingent of traditionalist Catholics who objectify women and fetishize veils are in the minority.

“I think there’s a very small but loud and vocal minority that can really distort things. It’s a shame, but it’s how it works in our age of social media,” she said.

Ms. Wilson, who filled 1,000 orders for veils last month, does not even think most of her customers are Latin-Mass-goers.

Ms. Wilson thinks the contingent of traditionalist Catholics who objectify women and fetishize veils are in the minority.

Can that really be true? Veiling has always felt foreign to me, far outside the realm of “regular Catholics.” When I was young, the only ones veiling were very old women who rattled their way through a rosary during Mass and forced sentimental holy cards into your pocket.

Then I came into contact with a contingent of half-schismatic traditionalists who literally greet strangers with the news that perfidious Jews have infiltrated the church. The women and girls all veiled, and with their veils came a hangdog submissiveness that would break your heart.

And that was what I knew about women who veiled.

Then came the tradwives, who veil with a vengeance. These young Catholic women are highly active on social media, and they gleefully tout their physical beauty as a poke in the eye of feminism. They insist it is a woman’s job to please her man with a fit body, on point makeup and lustrous hair that gleams as brightly as the lacy veil that covers it.

Even The New York Times picked up on the tradwife trend, running an op-ed by Annie Kelly in 2018 that described “soft-spoken young white women who extol the virtues of staying at home, submitting to male leadership and bearing lots of children” and explicitly linked them with white nationalism.

“The seemingly anachronistic way they dress is no accident. The deliberately hyperfeminine aesthetics are constructed precisely to mask the authoritarianism of their ideology,” Ms. Kelly wrote.

She is not imagining this. In 2015, the traditionalist Catholic world convulsed over the ghastly denouement of one Anthony Perlas, a.k.a. Anthony Tridentine, a photographer who gained popularity among Catholics by sharing striking images of young women in modest attire and veils in a group called the Latin Mass Society. But the photos became steadily more sultry, eventually crossing the line into soft-core porn, accompanied by blasphemous images and Nazi slogans. The Latin Mass Society of England and Wales put out a statement clarifying that his group was not their group, and an F.S.S.P. priest who met Mr. Perlas before his slide into depravity issued a warning to stay away.

Thankfully, Mr. Perlas is an extreme example, one with little relevance to yet another variety of young veiling women. They veil for themselves and for God, and what men think matters not at all—and that includes men who think veiling is only for uptight, downtrodden ultra-conservatives.

These women are not subservient (nor are they Nazis, not even a little bit). Many work outside the home; many send their kids to public schools. Many wear jeans and leggings, not floor-length prairie skirts. And their general approach to gender roles might be summed up in the words of Annie Oakley: “I ain’t afraid to love a man. I ain’t afraid to shoot him, either.”

Anna Burke-Herrera, a stay-at-home mom and “Game of Thrones” fan, said to me: “Gonna scare the menfolks with this one, but our value isn’t based on [a man’s] opinion or [his] gaze. Women. Are. People.”

Though the devotion is often associated with subservience and meekness, a significant number of women told me they have found their veils empowering.

A significant number of women told me they have found their veils empowering.

Ms. Burke-Hererra said, “I was forced to veil as a child, and I hated that it wasn’t my decision. By taking my own ownership of veiling, I took control of my spiritual life. I become responsible for my own focus in Mass. I began to recognize the True Presence more by choosing to veil.”

She says she uses her veil as “horse blinders” to help her focus on the Mass.

Rebecca Salazar, a biologist from Houston, said, “It’s like I can make my own little private room for prayer.”

A number of these veiling women are not especially stereotypically feminine in their dress. The graceful, attention-getting elegance of the lace mantilla is not a major draw for them (although several women cheerfully admit that wearing a veil means they can put off washing and styling their hair).

Liz Schleicher, a newspaper columnist from Missouri who attends a Novus Ordo Mass, compares her veil to “the armor of God.”

“I feel like it helps me focus more deeply on being in a holy place. There’s that delineation: Hey, I’m putting this on, so things are different in this space. I’m a very sensory person, so those outward signs really do help my inner disposition,” Ms. Schleicher said.

The outward signs are for her, not for any onlookers—but she is well aware that her veil might be misunderstood by people on both sides of the political spectrum and people of a variety of liturgical preferences.

She is well aware that her veil might be misunderstood by people.

“On the ultra-traditionalist side, head covering can get tied into the myth of the beautifully demure traditional woman and her value on the basis of her appeal to men. It becomes another way to objectify women,” she said.

“On the ultra-liberal side, I think there’s also some unjust discrimination going on. Someone might see a woman with a covered head and immediately pre-judge her and her motivations, intelligence and priorities. Some people see that veil as a signal they don’t have to take a woman seriously because she and her veil are just unfortunate leftovers of the ‘bad old days.’”

Either assumption, she said, is just lazy and a way to dismiss women, rather than encounter them as individuals.

A veil can also help a women become less dismissive of herself. Ms. Wilson said that wearing a veil at Mass helped heal her sense of self-worth.

Although none of the women I spoke to were concerned with looking a certain way, Elisa Low, an artist from Texas, did say she is aware of sending a certain message—not to men but to other women in her parish. Ms. Low, who attends a Byzantine Catholic church, said she does not wear mantillas because she associates them with the “guilt-ridden, reverence-not-measuring-up, holiness-judging attitudes” she encountered from ultra-traditionalist groups in her childhood.

But she will sometimes wear an Eastern-style headscarf out of solidarity with her Eastern community.

“It feels like love and sisterhood. Me wearing an Orthodox-style scarf on my head is less about anything between me and God or sending a theological message and more about a sense of tapping into the traditions of my church, expressing solidarity with the other women of the parish and honoring the grandmothers and great-grandmothers who came before us and wore scarves,” she said.

Ms. Wilson said many women tell her they feel drawn to veiling but don’t want to appear holier-than-thou.

Ms. Wilson said many women tell her they feel drawn to veiling but don’t want to appear holier-than-thou, or they are afraid they’re doing it out of vanity. Although she makes her living selling veils, she encourages women not to buy and wear them if it causes them turmoil.

“It’s easy to lose your peace over things that don't matter,” she said. “When the church gives us freedom, that is a gift. God wants us to be a peaceful person. If something is taking away your peace, then don’t do that.”

“It’s not about the veil. It’s about your relationship with God,” she said.

I could not help but wonder, given the controversy, what Ms. Wilson’s husband thinks. Does he find his wife's veil "smoking hot"?