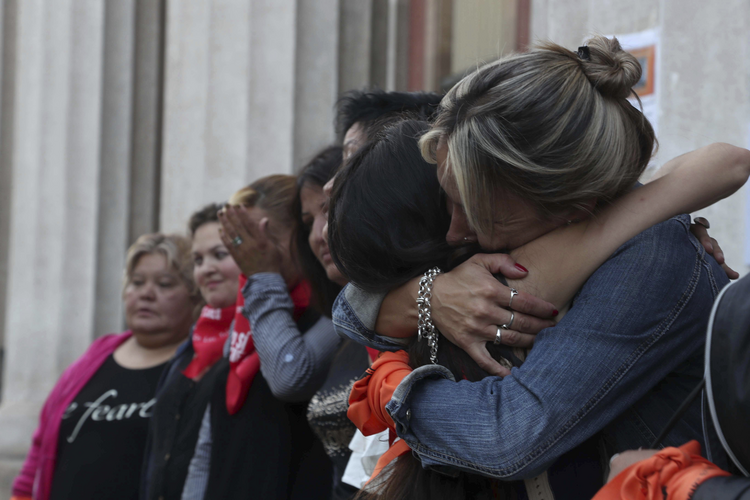 The mothers of the alleged sex abuse victims from the Antonio Provolo Institute for Deaf and Hearing Impaired Children, stand and embrace in front of the court building in Mendoza, Argentina, Monday, Nov. 25, 2019. (AP Photo/Marcelo Ruiz Mendoza)

MENDOZA, Argentina (AP) — Two priests were found guilty on Monday of sexually abusing deaf children at a Catholic-run school in Argentina, a case that has shaken the church in Pope Francis's homeland.

A three-judge panel in the city of Mendoza sentenced the Rev. Nicola Corradi to 42 years in prison and the Rev. Horacio Corbacho to 45 years, for abusing children at the Antonio Provolo Institute for Deaf and Hearing Impaired Children in Lujan de Cuyo, a municipality in northwestern Argentina.

The court also sentenced gardener Armando Gómez to 18 years in prison. The victims are 10 former students.

The accused declined to make statements ahead of the judges' ruling. They appeared somber as they arrived in the courtroom, with Corradi in a wheelchair, his gaze fixed on the ground.

The case has shocked Argentines — as did the revelation that Corradi had been previously accused of similar offences at a sister agency, the Antonio Provolo Institute in Verona, Italy, but was never charged.

The Vatican had known about Corradi since at least 2009, when the Italian Provolo students went public with tales of abuse and named names. The Vatican ordered an investigation and sanctioned four accused priests, but Corradi apparently never was sanctioned in Italy.

The defendants, who pleaded innocence, said the students' stories were improbable.

"The Argentine court has given the traumatized children of Provolo a measure of justice that the Catholic Church failed to give them," said Anne Barrett Doyle, co-founder of the online research database BishopAccountability.org, to the Associated Press.

"The horror of Provolo is twofold: the torture of the children and the Church's failure to prevent it. We hope the prosecutors now will launch a criminal investigation of the archbishops and other church leaders who knew or should have known that the school was being run by a child molester."

Doyle also said that "the Pope too must accept responsibility for the unimaginable suffering of these children. He ignored repeated warnings that Corradi was in Argentina."

Pope Francis has not commented publicly on the case, though in 2017, the Vatican sent two Argentine priests to investigate what happened in Mendoza. Dante Simon, a judicial vicar, told The Associated Press that the "horrible" allegations are "more than plausible." He said the pontiff expressed his sadness and told him that "he was very worried about this situation."

In a report submitted to the Vatican that June, Simon requested the maximum canonical penalty for Corradi and Corbacho, that they be made to "resign directly by the Holy Father." His report must be reviewed by the Congregation for the Doctrine of the Faith.

Corradi, who was the director of the institute, has been under house arrest because of his age, while Corbacho and Gómez were being held in a jail in the provincial capital of Mendoza.

Former students, young men and women, testified that the priests touched and sometimes raped them in their dormitories and school bathrooms. They also said they were forced to look at pornographic images. They said they were warned to keep quiet.

Investigators found records of complaints made by parents that weren't followed up, photographs of a naked girl on Corbacho's computer and chains he allegedly used to subdue one girl.

Many in Argentina have asked why Francis did not remove Corradi as the authority at the Mendoza school once he learned of the allegations in Verona.

Corradi's name appeared publicly in 2009, when 67 people said they were abused at the Verona institute by 24 priests, lay people and religious brothers, and specifically said that Corradi was in Argentina.

In 2012, the diocese of Verona asked for forgiveness from the victims and sanctioned 24 of the accused, although Corradi was not among them. None of the cases ever went to trial.

Corradi's name appeared again in 2014 in a letter written to the Pope by deaf students in Verona that reiterated the potential danger he posed in Mendoza.

In another case that raised questions for the pontiff, a bishop once close to the pope has announced he would arrive back in the country Tuesday to respond to prosecutor's allegations of sex abuse.

A prosecutor accuses Zanchetta of "aggravated continuous sexual abuse" of two seminarians, charges that carry a maximum penalty of 10 years in prison. He has denied the charges, which don't involve minors.

The Vatican insists the first accusation of actual sex abuse was only lodged against Zanchetta in late 2018. But AP and the newspaper Tribune of Salta have reported that documents and testimony from diocesan officials raised credible allegations of inappropriate sexual misconduct well before then.

Almudena Calatrava - Associated Press
@almucalatrava
Provide feedback on this article
Join the conversation: Login or create an account
Before you can comment, you need to update your profile to include your first and last name, as required in our comments policy. Then reload this page and you'll be set up for commenting. Update your profile
Show Comments ()
Comments are automatically closed two weeks after an article's initial publication. See our comments policy for more.