What it means for Pope Francis to visit Thailand, a majority Buddhist country

What it means for Pope Francis to visit Thailand, a majority Buddhist country 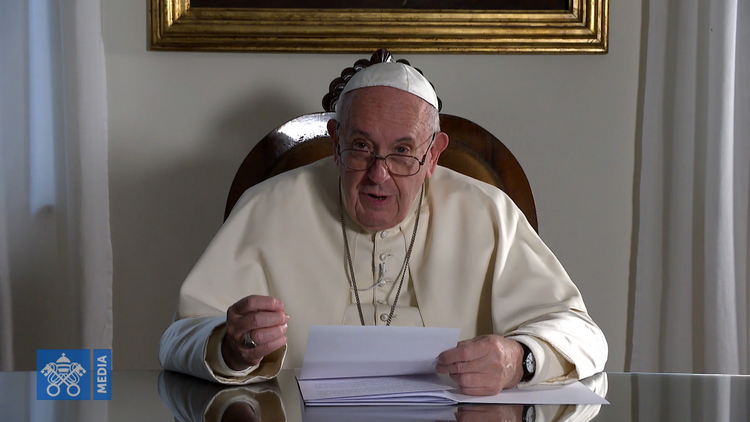 Pope Francis speaks from the Vatican in a video message to the Japanese people in advance of his visit to Japan. The pope will first visit Thailand on his Nov. 19-26 trip. (CNS photo/Vatican Media)

Pope Francis is coming to “the land of interreligious dialogue” when he visits Thailand from Nov. 20 to Nov. 23 as “a pilgrim of peace, to foster the building of bridges for peace and understanding,” Msgr. Andrew Vissanu Thanya-anan, the general coordinator of the papal visit and deputy secretary general of the Thailand bishops’ conference, told America in an exclusive interview.

“His visit means a lot to Thai people who, in general, have a heart of hospitality and tolerance,” he said, “because it confirms to the world that we enjoy full religious freedom in this land where 95 percent of the population is Buddhist.” He recalled that Christians have enjoyed this freedom “ever since the first seed of the Gospel was sown in the era of Ayutthaya when the Portuguese first arrived here in 1511 and subsequently the king of Portugal sent priests here in 1567.”

“His visit means a lot to Thai people who, in general, have a heart of hospitality and tolerance."

Monsignor Thanya-anan, 60, a former Holy See diplomat who has served in Sudan, Morocco, Greece, India, Japan, Ireland and Indonesia, highlighted the fact that Pope Francis’ visit coincides with three significant events in the history of the church here: the celebration of the 350th anniversary of the establishment of the “Apostolic Vicariate of Siam” (1669-2019), which was the first ecclesiastical jurisdiction in the country; the 50th anniversary of the establishment of diplomatic relations between the Holy See and the Kingdom of Thailand; and the centenary of Benedict XV’s apostolic letter “Maximum Illud” (Nov. 30, 2019). That letter redefined the principles and role of Catholic missionary work throughout the world, moved away from Eurocentric and colonialist thinking, advocated for the development of local church resources and an indigenous clergy, and had an impact here and elsewhere in the mission world.

“Thai people love Pope Francis because they see him often on TV, especially showing care for people at all levels of society and, in particular, the poor, children, women and disabled persons. The Buddhists consider him a great religious leader,” the Thai monsignor said. Moreover, “people remember Pope John Paul II because he was the first pope to visit this land 35 years ago, and his pastoral visit in 1984 is still a fresh memory.”

Asked what major problems the country faces today, Monsignor Thanya-anan said the political, economic and social situation in Thailand is generally “satisfactory,” but Thailand has “problems related to globalization, as do other countries, especially in regard to young people and education.” He emphasized that “Thai culture is rich, and young people need to be aware of this.” He underlined the fact that “Thai” means “freedom,” and “this land according to its geographic position is a really ‘golden land’ to which people can have easy access.” He noted, however, that “the danger is that some take advantage of this reality to use this land as a hub for many things, including human trafficking.” However, he added that “the Thai government is working hard against human trafficking and against the use of this land as a hub for such criminality.”

“People remember Pope John Paul II because he was the first pope to visit this land 35 years ago, and his pastoral visit in 1984 is still a fresh memory.”

Speaking about the Catholic community in Thailand, the monsignor, who was born 30 miles west of Bangkok in the country’s oldest city, Nakhon Pathom, said that even if it is “a small flock” of some 389,000 faithful served by 835 priests (including 312 from religious orders), 1,461 professed women religious and 1,901 catechists, “its strong point is that Catholics still attend Mass on Sunday,” and “we share our priests and religious to rural areas and neighboring countries, through our Thai Missionary Society that is run by the bishops’ conference.”

Our biggest challenges, Monsignor Thanya-anan said, are that “we need to catechize better the new generation, to help them understand the Gospel message,” and “we need to find suitable language to communicate well with young people.” He emphasized the importance of ensuring that Catholics are well educated in the faith because “over 95 percent of the marriages of Catholics are with persons of a different religion,” and if they are not well educated in the faith, then there is the risk of syncretism and relativism and also the risk that the Christian faith will not be passed on to the children.

At the same time, “Thailand is a land of interreligious dialogue that could be a model for other countries,” Monsignor Thanya-anan said. He knows much about the relations with other religions, especially between Christianity and Buddhism, having worked in the Pontifical Council for Interreligious Dialogue, a post to which Benedict XVI appointed him in 2008.

To engage in interreligious dialogue, he said, “one has to know well the cultural context and background of church history in each country.” He recalled that “Asia is the motherland of the world’s major traditional religions,” but said, “each country has its own background, culture, social and political situation.” In Thailand, he said, “there is a saying ‘to be Thai means to be a Buddhist.’” He recalled that he had heard this expression at a workshop on Thai culture and religion in Bangkok given by a Thai Christian who had obtained a Ph.D. in psychology in the United States. But while this scholar had described the Thai mind as “quite rigid” and Thai culture as “strong,” the monsignor said he had emphasized that the Thai people “can readily appreciate the goodness of Christians by the way they live and reach out to the poor and needy through charitable works.”

Monsignor Thanya-anan said this shows the fundamental importance of “witness” in “evangelization.” At the same time, he confirmed that the relationship between Catholics and Buddhists is “great,” as is their relationship “with the followers of other religions in Thailand.” He concluded by affirming that Thai people are “very religious,” “listen to religious leaders, love to give alms and do meditations,” adding that he is sure “they will listen to Pope Francis, too, and watch what he does.”