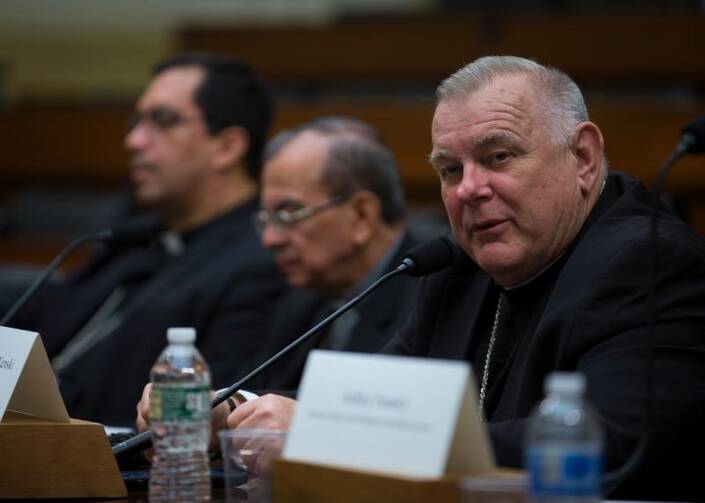 CORAL GABLES, Fla. (CNS) -- At a University of Miami Forum on Religion and Public Life, Archbishop Thomas G. Wenski of Miami affirmed the rights and dignity of migrants -- from Syrian refugees to Mexican asylees -- drawing upon his 18 years of advocacy for Miami's Haitian community.

Amid the nation's increasingly vitriolic immigration debates that often blame victims, the archbishop invited participants to consider "Who Is Our Neighbor?" in the light of Gospel compassion and Catholic social teaching.

"Christ came to save 'the least, the last and the lost.' God takes the side of the poor, the oppressed, the marginalized -- we can, too, and must take their side as well," he said at the recent forum, sponsored by the department of religion.

"Pope Francis at Lampedusa warned against the 'globalization of indifference.' Today's boat people, like those African refugees in the Mediterranean or the Haitians in the Caribbean, are modern-day Lazaruses who suffer in misery on our doorsteps," Archbishop Wenski said.

His many years of immigration advocacy includes past service as director of Catholic Charities in the Miami Archdiocese when he was an auxiliary bishop, board chairman for the Catholic Legal Immigration Network, or CLINIC, and chairman of the U.S. bishops' Committee on Migration.

The archbishop offered a historical perspective on Americans' immigration ambivalence and restriction movements. The Know-Nothing party of the 1850s opposed Catholic immigration of Germans to the Midwest and Irish to the East as a threat to the security of native Protestant Americans.

The influx of Polish and Italian immigrants in the 1920s prompted Congress to enact legislation to severely restrict immigration, similar to that proposed today by groups such as NumbersUSA and government officials, like White House adviser Stephen Miller.

"I am always amazed how many Catholics are unaware of how much the anti-immigrant nativism that emerged in the 19th century and that survives today was and is a manifestation of a deep anti-Catholicism that has yet to be fully expunged from our national consciousness," Archbishop Wenski said.

"I heard on talk radio -- and I read in blogs -- commentators saying that bishops are pro-immigration because we are just trolling for new Catholics to fill our emptying pews," he added. "But our pro-immigrant advocacy is about more than enlightened self-interest. It is a lived application of the Gospel message itself: 'I was a stranger and you welcomed me.'"

Migration is integral to human history, as it was for the Jews in Egypt and Abraham in Canaan, the archbishop said. "And soon after he was born, Jesus and the Holy Family were refugees in Egypt -- not unlike the millions of Syrians and Venezuelans displaced in neighboring countries."

Today, he reported, over 63 million people have been forced to flee their homeland; some put that figure at more than 70 million worldwide. Many are stuck in camps from Turkey to Bangladesh and thousands more stranded along the Mexican border.

In the United States, the government has announced a refugee limit of 18,000 for the next fiscal year, the lowest since 1980. As for migrants from Central America seeking asylum in the U.S., an estimated 60,000 people are waiting in Mexico. Under a Trump administration policy dubbed "Remain in Mexico, asylum-seekers must wait as their cases are reviewed.

Archbishop Wenski affirmed that people have a right to migrate to support themselves and those without documents have human rights to be respected. Refugees and asylum-seekers must receive protection, even temporarily -- including nearly 3,000 Haitians and 600 Cubans who were interdicted at sea and returned in the past 18 months.

Nations have a right to control their borders, he said, but obligations to solidarity trump sovereignty. He cited how the U.S. turned away the St. Louis ship of Jewish refugees in the 1930s, 253 of whom later perished in the Holocaust.

The current system has created an underclass of 10 million undocumented without labor rights, who are dehumanized and labeled criminals while only breaking civil law.

"In the U.S. experience, the economy needs immigrant workers and even those without legal papers can find work," he said. "Fixing of immigration does not require the demonization of 'illegals.' America has always been a land of promise and opportunity for those willing to work hard. We can provide for our national security and secure borders without making America, a nation of immigrants, less a land of promise or opportunity."

While the rich and highly skilled find ways to migrate, the church's advocacy focuses on the poor and powerless. "Globalization has made us all neighbors but it hasn't made us brothers and sisters. For that to happen we'll need to listen more to Matthew, Mark, Luke and John than to Steve Miller and the immigration restrictionists," he said.

For the Catholic Church, Archbishop Wenski said, a good place to start would be the extension of Temporary Protected Status for Haitian and Central Americans and the Deferred Action for Childhood Arrivals program, the future of which is uncertain as the U.S. Supreme Court considers a ruling in a lawsuit challenging a 2017 order issued by president Donald Trump to end the program. The court heard oral arguments in the case Nov. 12.

DACA was established in 2012 by President Barack Obama through executive order to provide protections to young people brought to the United States illegally as children by their parents. Often called "Dreamers," DACA recipients received work permits and Social Security cards, and they were safe from being deported. Those covered by the program number about 700,000.

What is really needed is comprehensive immigration reform, said the archbishop.

This should include "a path to legalization for those already working in the U.S. and with provisions for addressing future labor needs, which "would alleviate the flow of undocumented workers in the country and would allow better management of the border," Archbishop Wenski said.

Priscilla Greear - Catholic News Service
Provide feedback on this article
Join the conversation: Login or create an account
Before you can comment, you need to update your profile to include your first and last name, as required in our comments policy. Then reload this page and you'll be set up for commenting. Update your profile
Show Comments ()
Comments are automatically closed two weeks after an article's initial publication. See our comments policy for more.