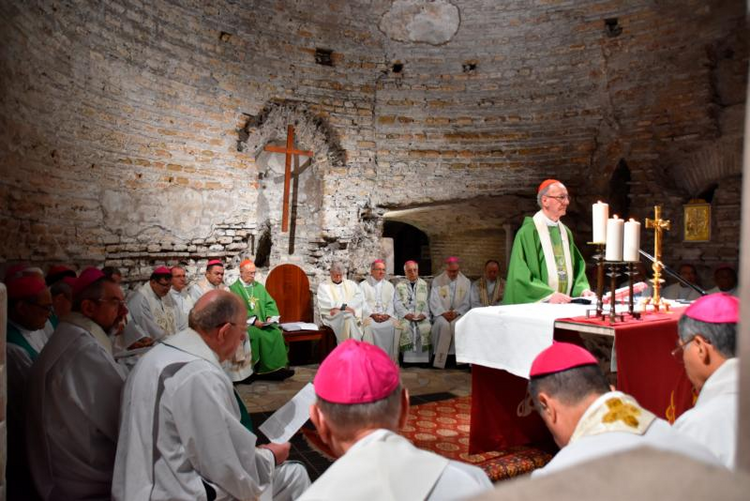 Brazilian Cardinal Claudio Hummes, relator general of the synod, and other participants in the Synod of Bishops for the Amazon celebrate Mass in the Catacombs of Domitilla in Rome Oct. 20, 2019. (CNS photo/courtesy Father Julio Caldeira-REPAM)

ROME (CNS) -- More than a half century after a group of bishops at the Second Vatican Council made a solemn pledge to live a simple lifestyle close to their people, a group of participants from the Synod of Bishops for the Amazon signed a new pact in the Catacombs of Domitilla.

Brazilian Cardinal Claudio Hummes, relator general of the synod, presided at an early morning Mass Oct. 20 in the catacombs where he and several dozen synod participants signed the new "Pact of the Catacombs for the Common Home."

Signers of the document promised a renewed commitment to listening to and walking with migrants, the poor and, particularly, with the indigenous people of the Amazon.

Invoking the martyred Christians buried in the catacombs and the martyrs of the Amazon, the signers of the new document promised to defend the Amazon rainforest, to promote an "integral ecology" of care for people and for the Earth and, "before the avalanche of consumerism," to live "a happily sober lifestyle, simple and in solidarity with those who have little or nothing."

They made a renewed commitment to listening to and walking with migrants, the poor and, particularly, with the indigenous people of the Amazon, helping them "preserve their lands, cultures, languages, stories, identities and spiritualities."

Doing so, the signers said, meant "to abandon, consequently, in our parishes, dioceses and groups all types of colonist mentality and posture," instead "welcoming and valuing cultural, ethnic and linguistic diversity in a respectful dialogue with all spiritual traditions."

Without mentioning the possible ordination of married men who are leaders of their communities, an idea that garnered much support at the synod as a way to give Catholics regular access to Mass and the sacraments, the bishops signing the pact committed themselves to "ensuring that the right to the table of the Word and the table of the Eucharist are effective in all communities."

The pact was signed by about 40 bishops and by women and men participating in the synod.

They also promised to "recognize the services and real 'diakonia' of a great number of women" already ministering to Catholic communities in the region. Many of the small working groups at the synod spoke of a need to recognize officially the ministry of women in the church and a couple of the groups, in reports released Oct. 18, called for the ordination of women deacons.

According to the news site Crux, the pact was signed by about 40 bishops and by women and men participating in the synod as observers, experts or "fraternal delegates" of other Christian churches.

The pact included a pledge "to walk ecumenically" in finding ways to inculturate and proclaim the Gospel and to defend the environment.

The Amazon synod is halfway over. Here’s what we know so far.
Luke Hansen, S.J.

The bishops also promised to enact a "synodal" style for the life of the church in their dioceses to ensure that all members of the church, "because of their baptism and in communion with their pastors, have a voice and vote in the diocesan assemblies, in pastoral and parish councils and, ultimately, (in) everything that concerns the governance of the communities."

In addition, they promised to stand by "those who are persecuted for their prophetic service of denouncing and repaying injustices, of defending the earth and the rights of the poor, of welcoming and supporting migrants and refugees."

Adding specifics to their vow to protect the environment, to shun privilege and to live like their people live, the signers promised -- like the signers of the 1965 pact did -- to use public transportation where possible and, additionally, to reduce the amount of garbage they produce and to avoid using plastic.

They also promised to "cultivate true friendships with the poor, visit the simplest people and the sick, exercise the ministry of listening, comfort and support that bring encouragement and renew hope."

What was in the original pact of the catacombs? Living in poverty? Or a commitment to eliminate capitalism? Since 1965 about 4 billion people have been added to the world and nearly all are not in extreme poverty - due to free market capitalism . Nothing the Church has done has helped in this process. Should there be a little contemplation on this by the Bishops?

I prefer they sign a document supporting gospel justice for all and including women.

These people, male and female, need to face the facts that sexism, and especially religious sexism, causes directly poverty on a global scale. This is a well-evidenced fact - not an opinion.

So if they are serious about their claims in wanting to help the poor, then they need to be seeking and demanding women be allowed same and equal ordination and be immediately ordained priests and bishops. Celibacy is not an unjust sacrifice for any male or female priest to have demanded of them. Discrimination and rejection for ordination based purely on one's sex is sin and it is an attack against the human dignity of that person. Christ actually supported not marrying, or becoming a eunuch even, in order to serve the kingdom of God. He did not demand it but he did not state that this sacrifice should not be asked of leaders in religion. He certainly did not relay the impression that all celibate people were somehow sexually immature automatically and therefore prone to pedophilia. That explains perhaps why married men actually molest children and teens of both sexes and sexually assault women more than single or celibate men.

Obviously, any man or woman can choose to not marry. Women cannot and did not choose to be born female. According to Christ all of his followers represent him equally based on their faith, not their flesh.

Creating a ministry for women, or only requesting a far lesser role of ordained deacon be allowed for women, in order to avoid having to face the discomfort of demanding actual justice from our church leader is a sinful act of sexism. Do not think to yourselves that Jesus will be confused by the appearance "of your trying" to help women rather than actually taking the real risks associated with protesting aggressively for genuine justice and equal sacraments and treatment for women in Christ's Church.

What we don't need are any permanent deacons. What we do need is to allow lay men and women to do all the works and ministries permanent deacons do (which already breaks no church laws) and we need women equally ordained priests, bishops and made cardinals and allowed to be elected popes.

Justice cures a thousand woes and poverty is one of them. Yet our pope continues to ask us to take his quest to cure poverty seriously while he upholds Church laws, traditions and teachings that are clearly sexist and misogynistic when he has the right to obliterate them all.

My answer to your call for concern Pope Francis is this: Practice what you preach! Ordain women priests and bishops now! Make women cardinals now! Stop complaining about the wrongs you have no power over and start curing the wrongs in our church which you have all authority to fix immediately. Maybe then, people will think you are serious about wanting to help the poor, the marginalized. Maybe then, people will believe you care more about preventing global warming and climate devastation than you care about keeping our religion running according to patriarchal, clerical, abusive exclusion. You don't get to play the good guy while you abuse women or while you treat them in any way less Christ-like than men, or less sacred than men.

Pope Francis, You need to choose what and who you are, a good guy who stands up for justice for all, or are you a bad guy - just another wolf in sheep's clothing?