If you could canonize anyone, living or dead, Catholic or not, who would it be? 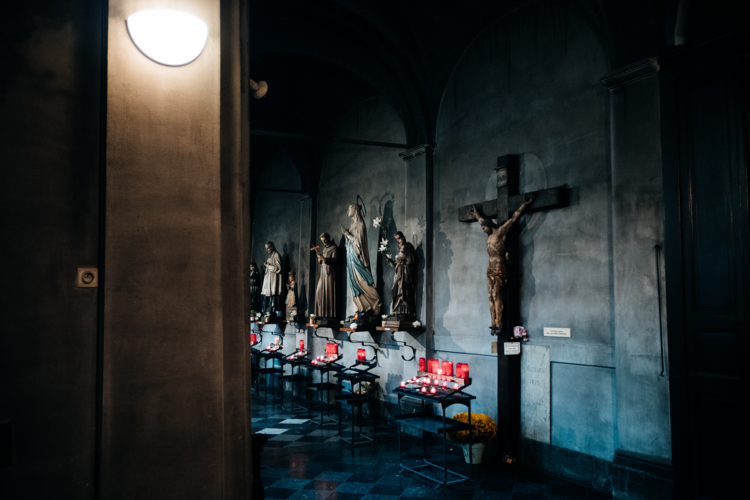 Photo by Steven Kamps on Unsplash

In every episode of our podcast, “Jesuitical,” we conclude our interviews by asking all our guests the same question: “If you could canonize anyone, living or dead, Catholic or not, fictional or real, who would it be, and why?” After more than 100 episodes, we decided to ask our listeners the same question and invited them to send their answers in by email.

I think everyone can glean something from this exercise, even if (almost) none of us are in a position to formally elevate someone to sainthood. One listener, Nick Frega, wrote: “It was really such a great experience to talk about a friend’s holiness, which I had not anticipated until I did it.”

Jan Karski. A Catholic born in Poland in 1914, he worked for the Polish government-in-exile, and was among the first to report on the atrocities of the Warsaw ghetto and the expulsion of Jews from their homes to the Belzec death camp. Like other saints, Karski was a risk-taker, getting detained at a Soviet labor camp in 1939 and undergoing torture by the Gestapo without surrendering his cause. Karski recognized God in his fellow man, as he witnessed firsthand the injustice that was perpetrated on his Jewish neighbors.
– Joe Egler

J.J. Stinson. J.J. passed away in 2012 in Switzerland while studying abroad. He had gone for a hike to reflect and pray during the Triduum, and was found with a Bible. J.J. was the embodiment of joy, meeting everyone with love and pushing them to recognize God’s grace within them. He engaged thoughtfully with theology and philosophy and was an excellent musician in spaces both in and outside of the church. J.J.’s passing started me going to Mass now annually on All Saints or All Souls Day, because I have no doubt he is praying for us in heaven.
– Megan Murray

Ted Brown, M.S., a missionary of Our Lady of La Salette. Father Ted spent over two decades as the Catholic chaplain and faculty advisor to the Newman Club at L.I.U. Post in Long Island. There he led countless young adults to be connected to the faith while also teaching us how to incorporate it faith into everyday life through retreats, city and ski trips, soup kitchens, and many other things. What sticks with me most is going into the streets to bring sandwiches and donated clothing to the homeless. We not only give them food and clothing, but we talk to them about their lives, learning that they were just like us.

Father Ted has brought so many people to, and back to, the faith, especially young adults. Many people I know, myself included, are still in the church because of him.
– Erik Raessler

Giovannino Guareschi, author of The Little World of Don Camillo. Anyone who has read these charming, simple stories about a rural Italian priest will have felt enriched, had their faith deepened and laughed out loud. Most of us can probably identify with Don Camillo’s very human and flawed personality as he strives to obey his conscience, given voice in his conversations with a patient but frequently exasperated Jesus.
– Gerry Bagnall

Fulvio Frediani, my father, was not a churchgoing man. He went to church three times in his life: when he was hatched, when he was hitched and when he was disposed. His faith was in his labor and his ability to draw from work the means to provide for his family. As when Christ carried the cross to the mount, my father carried sacks of cement and sand every day on his shoulders.
– Paul Frediani

Brother Lawrence Goyette, F.S.C., the founder of the San Miguel School in Providence, R.I. San Miguel provides a high quality, holistic education for boys from diverse and challenging backgrounds in grades five through eight. Each “Miguel Man” as the boys are called, is encouraged to learn, to serve and to grow to reach his full potential.

As a former volunteer at San Miguel Providence, I can attest to the miracles Brother Lawrence, and the teachers and staff, have created in the young men they have educated and the improvement the school has brought about to the City of Providence.
– Laura Zurowski

Deacon Peter Burns, parish life director at St. Timothy Catholic Church in Lutz, Fla. He is the most influential person in my own life as a minister, as my formal ministerial mentor. He made space for me to have my own wounds healed, so that I would not be ministering from a place of needing to be needed but rather a place of real self-giving love. I know he’s done this for many other people. In other words, not only is he fantastic at being Christ to others, but he’s also developed the potential of other people to be Christ to others.
– Nick Frega

Fred Rogers. He dedicated his life to teaching children and their families to love their neighbors and each other. Through television, he reached children who might not have otherwise learned about compassion, patience and love. I would name him the patron saint of children and neighbors.
– Jennifer Morris Mitchell

The singer Ezra Furman. She arranges her whole life around her faith. For example, on tour she still keeps Shabbat and does not work or travel between sunset on Friday and sunset on Saturday. Being a struggling indie rock performer, this means a lot of rearranging things like festival appearances and gigs.

She recently came out as transgender, which has led to her getting a lot of criticism from the usual bigots, who had previously just stuck to anti-Semitic and homophobic abuse but now have branched into trans-phobia. Despite this, she is being incredibly open and real about her experiences purely so she can “help out other young queers” by being visible. Despite a lifelong history of mental health problems, she still makes herself a symbol of transgender power at great personal risk; and I love her for that.
– Shelley James

Some responses were also sent as audio recordings. A sample of those will be featured in the podcast feed for the “Jesuitical” podcast. Listen at americamag.org/jesuiticalshow.

I would add Rose Hawthorne to this list. She was the daughter of Nathaniel Hawthorne, a convert and a remarkable woman who started an order of nuns that are still thriving (Dominican Sisters of Hawthorne - Rosary Hill, Hawthorne, NY). I once help write the history of her order. She changed how we view cancer patients in the world. Before she started working with cancer patients they were treated like lepers and kept isolated from other patients. She was a personal friend of Emma Lazarus who died young of cancer.

I would nominate Jimmy and Rosalynn Carter. I think they are living saints. Together, they have done so much in the U.S. and around the world to combat homelessness and disease and alleviate much human suffering. They founded the Carter Center in 1982, not long after leaving the White House in order to advance peace and health worldwide. It has helped to improve life for people in more than 80 countries by resolving conflicts; advancing democracy, human rights, and economic opportunity; preventing diseases, improving mental health care, and teaching farmers to increase crop production. Their efforts have basically eradicated Guinea worm disease. Even at their current ages, they continue to build houses for Habitat for Humanity and President Carter teaches Sunday School every week. We can only imagine all that they have done in secret. I always wished I could have met them at some point to tell them of my great admiration for both of them.

I would nominate Alice Cooper.

Martin Luther. He was largely correct about the rot that infested the Church in the early. 16 th Century, and his inspired insight into the importance and primacy of faith over works - which the Church has as a practical matter accepted, although you wouldn’t know it by faithful attendance at Mass and listening to the vapid sermons that are usually on offer to the faithful - revolutionized Christianity. We need a new Luther today to excise the rot that has re-infested the Church. Martin Luther is the obvious selection for canonization.

I would add Harriet Tubman--because of her heroic and selfless work of freeing her brothers and sisters from slavery.

Richard Rohr, OFM. Philosopher, theologian, and monk. His writings capture the fullness of our possible relations with God in a very rich way.

Richard Rohr, OFM. Philosopher, theologian, and monk. His writings capture the fullness of our possible relations with God in a very rich way.

Father Andrew Greeley. Loyalty. Passion. God as a Truly Beautiful Woman who is an Artist and Storyteller, and who hungers for us as much as we hunger for Her.

Love Giovanni Guareshci and the "Don Camillo" books. I would put Cornelia Connelly top of the list. She became a Catholic because her husband wanted to convert. Then he wanted to be a Catholic priest- against her pleadings- but he went ahead with it despite her objections- so she took a vow of celibacy, required of her for him to become a priest. Once her kids grew up, she became a nun and founded the Holy Child order. Then- here's the kicker- her husband said I've changed my mind, come back to me. She said, no thanks, and then he persecuted her for the rest of his life and alienated their children from her. For persevering despite that rat-bastard husband, she get my vote.

Daniel Berrigan, S.J. - Jesus Christ as poet
If this be heresy - make the most of it.

Agreed. Well chosen. What more in the Name of Love?