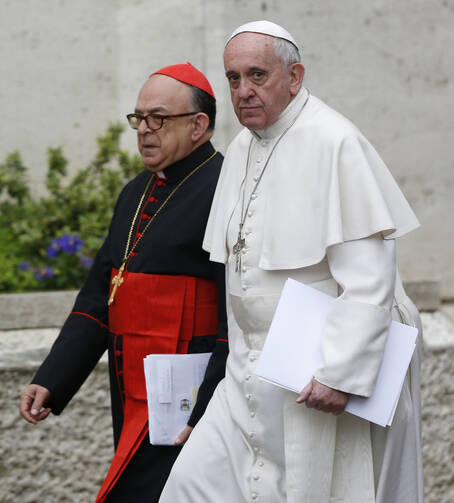 Pope Francis and Cardinal Raymundo Damasceno Assis of Aparecida, Brazil, walk to a meeting of cardinals in the synod hall at the Vatican Feb. 20, 2014. In a statement released by the Vatican Sept. 28, 2019, the pope named Cardinal Damasceno as pontifical commissioner of the Heralds of the Gospel and its religious branches for consecrated men and women. (CNS photo/Paul Haring)

Pope Francis has appointed a pontifical commissioner to take charge of the international association of the faithful known as “The Heralds of the Gospel,” as well as its female and male branches of consecrated life. In a statement released on Sept. 28, the Vatican’s Congregation for Institutes of Consecrated Life and Societies of Apostolic Life recalled that on June 23, 2017, the congregation, together with the Dicastery for the Laity, Family and Life, ordered an “apostolic visitation” of the association and its clerical and women’s societies of apostolic life.

The communique stated that after the two congregations had “attentively studied” the conclusions of the visitation, Pope Francis approved the appointment of the Brazilian Cardinal, Raymundo Damasceno Assis, as the pontifical commissioner for the Heralds of the Gospel and its male and female branches.

This means the cardinal will take charge of the association and will be assisted in this role by Monsignor José Aparecido Gonçalves de Almedia, an auxiliary bishop of Brasilia, and Sister Marian Ambrosio, the Superior General of the Sisters of Divine Providence.

A similar oversight was ordered for the Legionaries of Christ after a scandal involving its founder and an apostolic visitation, when the pope appointed a cardinal to oversee that religious institute with a view to its renewal.

In the video, a priest standing next to the founder read several claims made by a demon during an exorcism, claiming that "the Vatican is mine" and foretelling the death of Pope Francis, causing some in the group to laugh.

Established in 1999 by Monsignor Joao Scognamiglio Cla Dias, the Heralds of the Gospel is an offshoot of the Brazilian Society for the Defense of Tradition, Family and Property. T.F.P. was a traditionalist Catholic political movement founded by Plinio Correa de Oliveira, a right-wing activist whom the Brazilian priest considered a friend and mentor. After de Oliveira's death in 1995, a legal dispute arose over ownership of the group; ultimately, Msgr. Cla Dias won and founded the Heralds of the Gospel.

Recognized by the Vatican as an international association of the faithful of pontifical right in 2001, the association and its branches for consecrated men and women, known as Virgo Flos Carmeli and Regina Virginum respectively, has people in more than 70 countries. Controversy about the group arose in 2017 when a video of a meeting between Msgr. Cla Dias and 60 priests of the religious association was made public on social media.

In the video, a priest standing next to the founder read several claims made by a demon during an exorcism, claiming that "the Vatican is mine" and foretelling the death of Pope Francis, causing some in the group, including Msgr. Cla Dias, to laugh. Other videos released online revealed practices by the Heralds of the Gospel not included in the Catholic Church’s Rite of Exorcism, including the use of the names of de Oliveira; his mother, Donna Lucilla; and Msgr. Cla Dias to drive out demons and physical abuse against people allegedly possessed.

Shortly after the video's publishing, the Vatican announced the apostolic visitation and Msgr. Cla Dias said he would resign as the group’s superior general. However, in a June 2017 letter announcing his resignation, Msgr. Cla Dias said he would not “renounce my mission as father” of the group and would continue “to intercede next to God” as the “living model and guardian of this charism, entrusted to me by the Holy Spirit.”

The Vatican said on Sept. 28 that the reason for the apostolic visitation in 2017 was due to “shortcomings concerning the style of government, the life of the members of the council, the pastoral care of vocations, the formation of new vocations, administration, the management of works and fundraising.”

The decision to appoint a commissioner, the Vatican said, “should not be considered a punishment, but an initiative intended for the good of the association, and an attempt to resolve existing problems.”

According to the Vatican directory on associations of apostolic right, the Heralds “strive to be instruments of holiness in the Church by encouraging close unity between faith and life, and working to evangelize temporal realities, particularly through art and culture.”

The directory also notes that their apostolate involves parish animation, evangelizing families, providing catechetical and cultural formation to young people and disseminating religious literature and that they focus especially on organizing artistic events in churches, schools, hospitals, factories, offices and prisons. Its educational efforts focus on developing an interior life firmly rooted in the Eucharist, devotion to Our Lady and fidelity to the Successor of Peter. The formation of its members involves the study of moral theology, exegesis, history and thorough training in the arts and modern languages.

Today, the Heralds are present, especially among the young, in many countries including the United States and Canada, and the association is reportedly among the fastest-growing religious organizations in the church. According to the Vatican directory, the supreme authority of the Heralds is the General Assembly, which elects the General Council to assist the General President in governing it. In each country, they gather together in sodalities, made up of men and women, with their own government elected by the assembly, coordinated by a regional council.

The Heralds have a distinctive dress, reminiscent of the medieval knights. There are indications that some in the association find the leadership of Pope Francis particularly challenging.

Pope Francis, Please pay attention and do something to vitalize the Church.

Some real problems in church: The question is whether Christianity can be considered as a religion, because each religion has its own god, but Christianity has the god of Torah Yahweh as Jesus had, and therefore canons in all denominations include the Torah and Jesus as a historical person has in unequal pedigrees of the canonical Gospels historical father Heli. Christianity can be regarded as a cult, even cesarisized in the Hebrew environment, according to the religious analysis, in the period phenomena of ascension and deification... within the Christian virtue of honesty, spread further, thanks filozofiaschmidt.wordpress.com