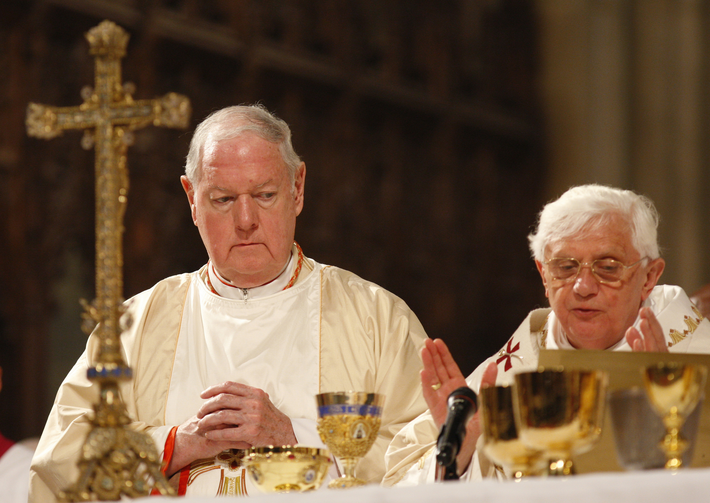 Current Bridgeport Bishop Frank Caggiano ordered an investigation last year into priests' sexual abuse of minors dating to the diocese's founding in 1953 in an effort to obtain a full accounting of the wrongdoing, detail how church leaders responded and increase transparency for lay members. Former Connecticut state Judge Robert Holzberg laid out his findings in a news conference Tuesday.

The yearlong review found that 281 people—mostly males between 5 and 18—were abused by 71 priests since the diocese's inception. Holzberg said there probably are many more victims who could not be identified because church records were destroyed. The diocese has spent about $56 million settling victims' lawsuits.

"Until the early 2000s, the collective response of diocesan officials to the sexual abuse crisis was inadequate in nearly every way," the report said. "But the single gravest moral and legal lapse was the consistent practice of Bishops Lawrence Shehan, Walter Curtis, and Edward Egan—over four decades—of leaving abusive priests in service, and thereby making it possible for them to continue committing abusive acts."

“The single gravest moral and legal lapse was the consistent practice of Bishops Lawrence Shehan, Walter Curtis, and Edward Egan—over four decades—of leaving abusive priests in service, and thereby making it possible for them to continue committing abusive acts.”

The report said Curtis and Egan broke a 1971 state law by failing to report the abuse, and Curtis had records destroyed. It called Egan's response "profoundly unsympathetic, inadequate and inflammatory." Egan, the report said, deliberately concealed the reasons for abusive priests' transfers and believed protecting the reputation of the diocese was more important than the well-being of victims.

Before his death, Egan defended how the diocese responded to the clergy abuse scandal and expressed skepticism about abuse allegations.

Many details in the report about how church leaders handled abuse allegations had previously come to light in lawsuits and prior statements by church officials.

Caggiano on Tuesday apologized to clergy abuse victims and said the "evil and crime" of child sexual abuse had forever changed the church.

"It is a wound that I am very much aware will take a very long time to fully heal," he said. "However, this report I believe is an important and essential step in our ongoing efforts to bring healing to anyone who has been wounded by this scourge."

Caggiano also noted that the 71 priests found to have abused the victims were only a fraction — 4.7% — of the nearly 1,500 priests who have served in the diocese since the 1950s.

In a statement, the Survivors Network of those Abused by Priests said the 4.7% rate is far below the rates of other dioceses that have been investigated.

"What is disturbing is that the men singled out in this report, including former Archbishop Edward Egan, all had high level positions in other dioceses, meaning that their callous disregard for children and survivors as recognized in Bridgeport was likely experienced by survivors around the country," the statement said. "Every diocese where these men served should be subject to a full investigation by law enforcement officials to determine if any of these cover-ups can be criminally prosecuted."

The group also said it hopes the report leads to state prosecutions of the abuses and alleged cover-ups and encourages other victims to come forward.