Buffalo bishop will not resign despite diocesan abuse scandal

Buffalo bishop will not resign despite diocesan abuse scandal 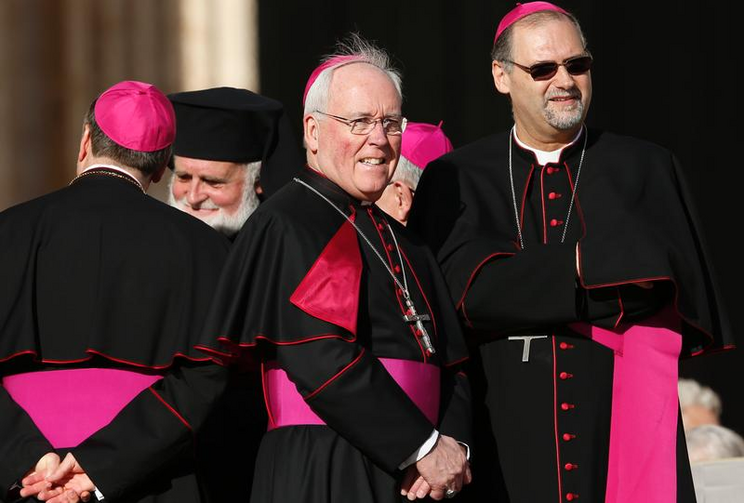 BUFFALO, N.Y. (CNS) -- Bishop Richard J. Malone of Buffalo said the majority of priests and parishioners in the diocese supported him and he would not resign over his handling of a situation involving two priests' relationship with a seminarian.

"I'm here because I feel an obligation as the one who was sent here to lead this diocese, to carry on, and once again, if I thought the majority of Catholic people in particular were calling for my resignation, that would be a different story," Bishop Malone said during Sept. 4 news conference in Buffalo.

"But I don't feel that. I go out to parishes and schools all the time for visits. I am always well received when I go ... I do feel enough support, honestly to continue on," he told reporters gathered at the rectory of St. Joseph's Cathedral.

Bishop Malone called the news conference to discuss a letter from Father Ryszard Biernat to a seminarian, Matthew Bojanowski, and allegations by Bojanowski that another priest, Father Jeffrey Nowak, harassed him.

Father Biernat began a leave of absence from his position as the bishop's priest secretary Aug. 14. He had been in his position since 2013.

In a recording obtained from Father Biernat by WKBW-TV, Bishop Malone is heard saying that he feared having to resign over what he called a "love triangle" involving priests and a seminarian.

Bishop Malone also expressed concern to Biernat that "this could be the end for me as bishop" if the news media learned about the situation involving the three men and called the situation he was facing "a true crisis."

Recording of Buffalo’s bishop leaks: ‘It could force me to resign if in fact they make a story’
Catholic News Service

The television station posted a transcript of the recording on its website.

The beleaguered bishop has faced questions about how he has handled allegations of abuse against diocesan priests for more than a year.

Bojanowski, who has withdrawn from Christ the King Seminary in suburban Aurora, said he first notified Bishop Malone in November 2018 of the allegation against Father Nowak. The diocese announced in an Aug. 28 statement that Father Nowak had been placed on administrative leave.

During the news conference, Bishop Malone said he thought the conversation with Father Biernat was confidential and expressed concern that the recording was made public.

The bishop also defended his handling of what he described as "a very complex, convoluted matter."

He said Father Nowak had not been accused of engaging in sexual contact with an adult or child and that the diocese was unaware of any activity that endangered parishioners or the public. He said he placed Father Nowak on leave when the priest refused to seek a behavioral assessment at St. Luke Institute, which serves priests, deacons and consecrated religious.

The situation involving the two priests and the former seminarian has its roots in a July 2016 letter from Father Biernat to Bojanowski in which he discusses his love for the student. Father Nowak photographed the letter without Father Bojanowski's permission, the Buffalo News reported.

Bishop Malone explained that the two priests had been friends and that Father Nowak had mentored Bojanowski as he discerned a vocation to the priesthood. After Bojanowski met Biernat, he began spending more time with him.

"Matthew's relationship with Father Nowak cooled you might say, and this was disturbing to Father Nowak," the bishop explained. "Father Nowak secretly photographed the letter he found in Matthew's apartment in Boston, when he was there. This was several years ago."

The bishop called the content of the letter "a bit concerning" and said he "suggested that Father Ryszard should go on a personal leave of absence."

The newspaper said the letter suggested that Father Biernat and Bojanowski were involved in a romantic relationship. However, Bishop Malone said he was "not aware at this time of an allegations of sexual impropriety between Father Ryszard and Matthew."

Attorney Barry N. Covert, representing Father Biernat and Bojanowski, told the newspaper that Bishop Malone was trying to distract people from his failure to remove Father Nowak in a timely manner.

This 67 year-old Survivor is surprised by nothing done by a member of the Clergy. But, this time, everyone is watching. This is the Buffalo Laity’s chance to stand up and be counted. Do you want transparency and accountability? Do you want to finally stand up and help Survivors? Then just do it...!

Richard Malone is more incompetent at coverup than his namesake, Richard Nixon; when your own secretary drops the smoking gun (Rose Mary Woods, Ryszard Biernat) you should figure it's time to shuffle out of Buffalo.