Trial of the Kings Bay Plowshares set for late October 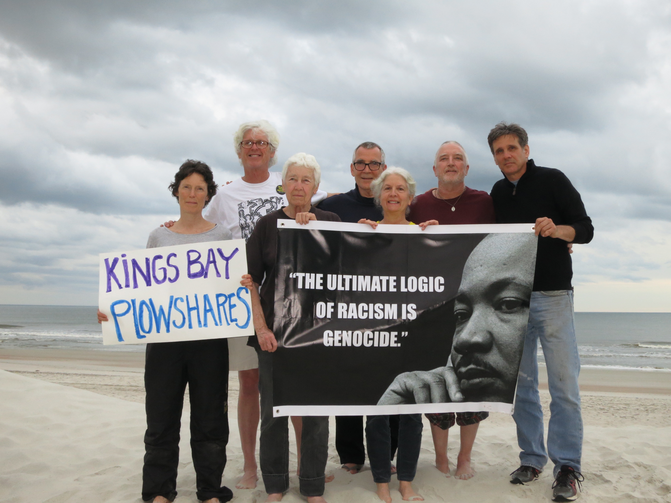 WASHINGTON (CNS) -- Seven people charged with breaking into the Kings Bay Naval Base to protest nuclear weapons will face trial Oct. 21 for their action.

U.S. District Judge Lisa Godbey Wood set the trial date after denying the defendants' motion to dismiss the criminal charges they face because their actions were motivated by their faith and thus protected under the Religious Freedom Restoration Act.

"It's not surprising," said Martha Hennessy, one of the so-called Kings Bay Plowshares charged with conspiracy, trespass and destruction and depredation of property.

"Her (the judge's) job is to protect the weapons system. Our job is to keep the faith, hope and love," Hennessy told Catholic News Service Aug. 29 by phone as she was hiking in northern Vermont.

The charges stemmed from an April 2018 protest at Naval Submarine Base Kings Bay in Georgia, one of two home ports for the U.S. Navy's fleet of Trident submarines. The ships carry about half of the U.S. active strategic nuclear warheads.

The seven entered the base by cutting through a fence and spent more than two hours on the grounds, placing crime scene tape and spilling blood at different locales while posting an "indictment" charging the military with crimes against peace, citing the Nuclear Non-Proliferation Treaty.

The defendants include longtime peace activists and several Catholic Workers.

In addition to Hennessy, granddaughter of Catholic Worker co-founder Dorothy Day, they are Elizabeth McAlister of Jonah House in Baltimore and Jesuit Father Steve Kelly of the Bay Area in California, both of whom remain behind bars in Georgia; and Catholic Workers Carmen Trotta of New York City; Clare Grady of Ithaca, New York; Mark Colville of New Haven Connecticut; and Patrick O'Neill of Garner, North Carolina.

They testified during an Aug. 8 hearing in U.S. District Court for the Southern District in Georgia in Brunswick that they were motivated to symbolically disarm the base because of their faith.

In her ruling, Wood acknowledged that the seven established that they had a prima-facie -- meaning at first review -- case in arguing that their action was protected under the religious freedom law.

However, the judge also determined that the government had a "compelling" interest in keeping unauthorized people from the base. She agreed with the government argument that charging the anti-nuclear activists with three felonies and a misdemeanor was the least restrictive means of protecting government property.

Each person faces up to 25 years in prison if convicted.

Attorney Bill Quigley, a member of the group's legal team, said he will attempt to schedule witnesses who can address two fronts.

The first, he explained, involves Catholic social teaching on the immorality of nuclear weapons. The second will be to "help the jury understand the incredible destructive power of the nuclear weapons on the base and what are the consequences of any use of those," he said.

Hennessy said she and the others will spend much of her time in the coming weeks preparing for the trial. She expressed hope that Wood will allow the group to testify about their motivations rather than limit testimony to the basic fact that they entered the military base illegally.

"The bigger question is: Will we be allowed to speak? If limits are put in place, we won't be able to mention pacifism, faith, nuclear weapons, the shedding of blood as sacramental," Hennessy told CNS. "That’s what the jury needs to hear. It remains to be seen if they will hear it."