By today’s standards, Jesus was a loser. That’s good news for us.

By today’s standards, Jesus was a loser. That’s good news for us. 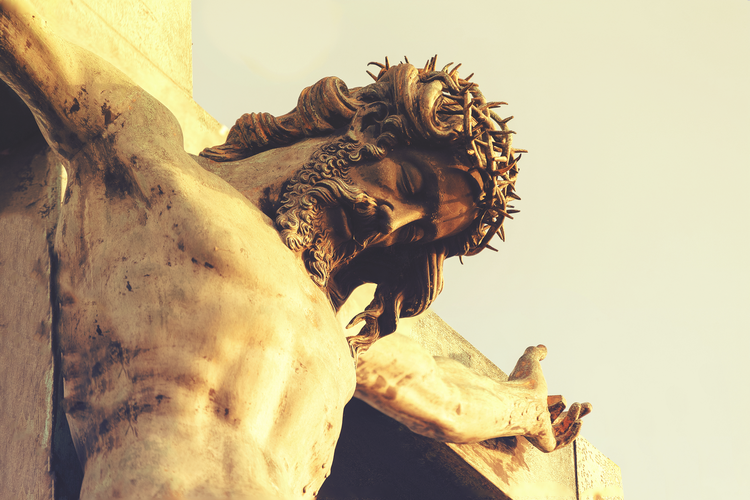 Dystopian novels and movies may well entertain us, but they also serve to warn us about where we are headed if we don’t change our ways. Neal Stephenson’s Fall; or, Dodge in Hell imagines just such a near future. In this novel, the United States is even more divided between the very wealthy and everyone else, and one of the things that money can buy is protection—specifically security from being overwhelmed with misinformation.

Stephenson introduces us to the Leviticans, post-internet Christians who reject the crucifixion and resurrection of Jesus. These people like winners, and the Jesus they reject looks like a loser.

So-called Christianity, as it existed up until recently, is based on a big lie,” Ted explained. “The most successful conspiracy of all time. And it was all summed up in the symbolism of the cross. Every cross you see on a mainstream church, or worn as jewelry, or on a rosary or what have you is another repetition of that lie.”

“And what is that lie exactly?” Phil asked. He already knew. But he and the others all wanted to hear a living human actually say it, just as spectacle.

“That Jesus was crucified.”

There. He’d said it. No one could speak. Ted took their silence as a request for more in the same vein. “That the Son of God, the most powerful incarnate being in the history of the universe allowed Himself to be scourged and humiliated and taken out in the most disgraceful way you can imagine.”

“‘Taken out’ means ‘murdered’?’” Anne Solenne asked. It was a rhetorical question that Ted answered with the tiniest hint of a nod.

“The church that was built on the lie of the Crucifixion,” Ted continued, “had two basic tenets. One was the lovey-dovey Jesus who went around being nice to people—basically, just the kind of behavior you would expect from the kind of beta who would allow himself to be spat on, to be nailed to a piece of wood. The second was this notion that the Old Testament no longer counted for anything, that the laws laid down in Leviticus were part of an old covenant that could simply be ignored after, and because, he was nailed up on that cross. We have exposed all that as garbage. Nonsense. A conspiracy by the elites to keep people meek and passive. The only crosses you will see in our church are on fire, and the symbolism of that has nothing to do with the KKK. It means we reject the false church that was built upon the myth of the Crucifixion.”

Sadly, such scenarios are already in play. Once one decides that the sacred Scriptures are nothing more than human documents that do not require any interpretation from an all-too-human church, one is free to substitute one’s own learning as the final arbiter of truth.

Why do we preach a crucified, humiliated savior? Because humility opens us.

This does not work for a highly educated and saintly genius, much less for the rest of us. God becomes what you learn from Google, the most prejudicial and fallible tool of knowledge ever to exist. More than anything else, education equips us to ask the right or at least better questions. Google gives back what it receives. Uninformed, narrow and prejudicial perspectives are confirmed there because the web is a worldwide echo chamber.

Our culture does not value humility. It makes one, in today’s vernacular, a loser. So why do the Scriptures present humility as an essential virtue, as a strength? Why is Jesus meek and humble of heart?

What are you doing with the 1,440 minutes God has given you each day?
Michael Simone

They say that nature abhors a vacuum. Human nature does as well. The only chance that God and others have of finding their way into our lives is if we do not fill every inch of our world with ourselves. If your goal is self-advancement and you are talented, you may well achieve it. You will climb to the very spot that you seek in your little world. Unfortunately, you will be there largely alone.

Of course, if there is to be a group of Christians who reject a beta-Jesus as a loser, they will need to jettison large swathes of sacred Scripture as well. Both testaments are suffused with talk of God being close to the brokenhearted, hearing the prayers of the humble and lifting up the lowly. Why are these teachings repeated so often in Scripture? Why do we preach a crucified, humiliated savior? Because humility opens us. Because the only way to find God and others is not to fill the world with yourself.

Humility is accepting yourself exactly the way you care and how you are not. It comes from the realization that we are imperfect, but Go loves all perfectly, including ourselves. If we are loved unconditionally, we must both extend that grave to others and act as though we have and as Christ crucified extended this us, experiencing our pain and brokenness. He is a loser because we are losers.

The myth of self sufficiency must be smashed so that we can accept and give love, rather than forcing others into the cult of self. Bring that to the internet. Those who preach a rigorous morality focused on perfect behavior and an angry God will hate us for it. It is our badge of honor.

why is this a surprise? whom is this written for? it seems cliche