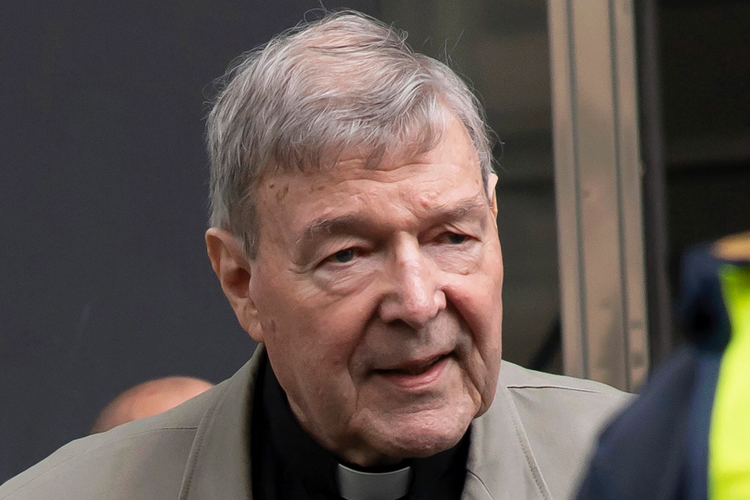 MELBOURNE, Australia (AP) — An Australian court has upheld convictions against the most senior Catholic to be found guilty of children sex abuse.

At the time, Pell had just become archbishop of Australia's second largest city and had set up a world-first compensation arrangement for victims of clergy sexual abuse.

His lawyers are expected to appeal the decision in the High Court, Australia's final arbiter.

Can't imagine why America would insert this seemingly defensive statement:
At the time, Pell had just become archbishop of Australia's second largest city and had set up a world-first compensation arrangement for victims of clergy sexual abuse.

America forgets that McCarrick at the Vatican meeting with JPII he gave a resounding defense of pursuing predators and at the Dallas meeting.
America is not objective in mudding the Tiber waters.

Dissenting judge Weinberg seemed to have the most judicious outlook. The characterization of the complainant as "a witness of truth", emotionally embraced by victim advocates, sounds like propaganda. I expect Weinberg to undergo a media lynching. Remembering the Birmingham Six or Linda Chamberlain, I suggest that a fuller history of the case and its context will ultimately establish the truth. Meanwhile, at least another year in solitary confinement for Cardinal Pell.

Isn't the Vatican conducting its own investigation into Pell? Can anyone shed light on how the findings of the secular courts will affect the Vatican's investigation? Has the Vatican sought the testimony of the man who claims he was abused by Pell when he was a 13-year-old choirboy?

The press reports much more than this brief clip offered by America magazine: "The three-judge court of appeal dismissed Pell’s first grounds for appeal – that the jury acted unreasonably in finding him guilty – by a margin of two to one. The other two grounds of appeal were dismissed unanimously. In the summary of the judgment the chief justice, Anne Ferguson, said two of the three judges found the complainant “came across as someone who was telling the truth”. “He did not seek to embellish his evidence or tailor it in a manner favourable to the prosecution,” she said. Ferguson and the president of the court of appeal, Chris Maxwell, dismissed all 13 “obstacles” to Pell committing the crime that his lawyers had argued. The third judge, Mark Weinberg, said the complainant’s evidence “contained discrepancies” and there was “a significant possibility” Pell had not committed the offences. Through his lawyer, Vivian Waller, Pell’s surviving victim said he was relieved by the decision. “The criminal process has been stressful,” he said through Waller. “The journey has taken me to places that in my darkest moments I feared I would not return from.” In a statement Pell maintained his innocence. His lawyers are now reviewing the judgment with a view to a possible appeal to the high court. The prime minister, Scott Morrison, said his sympathies were with victims of child sexual abuse. “The courts have done their job, they’ve rendered their verdict. That’s the system of justice and it must be respected,” he said. The governor general released a statement saying a decision on whether to strip Pell of his Order of Australia medal would not be made until “all legal proceedings have run their course”. That is, the governor general, David Hurley, will wait and see whether there is a high court appeal. Archbishop Mark Coleridge, the president of the Australian Catholic Bishops Conference, said the bishops believe “all Australians must be equal under the law and accept today’s judgement accordingly”." ... https://www.theguardian.com/australia-news/live/2019/aug/21/cardinal-george-pell-appeal-sexual-assault-conviction?page=with:block-5d5ca1f68f081cf11cf1a22d#block-5d5ca1f68f081cf11cf1a22d

The Australian courts have an enviable reputation for fairness and impartiality. Cardinal Pell’s attorneys will appeal to the Supreme Court of Victoria if possible. There is every reason to think that his case will be handled justly. While Cardinal Pell is not on my list of favorite people, let right be done.

Bloviations from the reactionary Catholic press are unworthy of comment. They become more irrelevant with time. Pell's politics within the Church is also irrelevant. At least Burke is silent. The state of the Australian justice system, or for that matter, of the Church's is also a mere detail.

The sex of the victim is a part the issue. Abuse is a crime of opportunity. Pell had more opportunity with boys because the clergy shuns girls, especially the reactionary clergy.

Most important is that a horror beyond sin was visited upon a real person. It is so horrible that not even the perpetrator cannot face it.

Jesus said he would it would be better for him to be thrown into the sea with a milestone around his neck. Jesus may have been talking about suicide, not punishment. Pell will have ample opportunity for suicide in prison. His fellow inmates will make sure he suffers, although he does not deserve the release of death for now.

The victim is now almost as badly afflicted. Great compassion toward him will be required to get him back to fine, including forgiving Pell, but for his own sake.

The sexuality of Pell is important to understand why this happened. To this day, Pell, his friends, and the Church have no clue. Indeed, their focus is how to spare him from justice. It shouldn't be.

While Pell chose celibacy, which is essentially an asexual lifestyle, his demons followed him into the priesthood. Whether he was abused or simply running from himself, there is little chance of escape. The Church offered him no help, just organized repression. This is no release. It only tortures and often explodes.

The Church makes the problem worse by covering it up publicly and considering it an incidence of sin privately. The laity let's it happen and is also clueless on how to stop it.

Laity and clergy see the denial of sexually as holy. It is not. Asexuality is simply a different sexuality on the LGBTQIA spectrum. Well integrated asexuals can indeed be holy if they are well integrated, finding celibacy fulfilling, not burdensome.

Condemning homosexuality and offering priesthood is no solution. Well integrated gays do well in male fellowship, especially if they ignore the demand of chastity. Those who are not may become abusers.

Well integrated gays and lesbians can also do very well on the outside, especially in a monogamous relationship. For this reason, the Church should embrace gay marriage. Sexuality is for humanity, not for God.

The assumption that sexuality is a sin leads some to promiscuity because if you think you are once damned, two is no problem. Promiscuity is a sin against oneself, not God. Every incidence hurts more, not less.

Some unintegrated gay men and unrealized asexuals who pushed into marriage, as well as unintegrated heterosexuals are all equally as likely to be abusers. It is even more ghastly to abuse your own child or the child of a sibling.

The key to sexual integration is honest self-awareness. Accepting that there is an LGBTQIA spectrum is a start, although maybe we should add an S on the end for straights.

Everyone who is self-fulfilled is healthy. Being in the center of the normal is statistics, not morality or health. Likewise, being sexually different is not sinful or unhealthy. We are what God made us. How we respond to it is what makes us well or pathological.

This is the truth upon which to base our sexual morality. As long as asexual priests are considered holy, rather than simply different, they will assume that their truth is true for the rest of us. In accepting that, they will find happiness for themselves. Happy people do not abuse children. Knowing this allows the Church to care for unhappy people in their own ranks and the world at-large.

Sadly, it is too late for Pell and his victim, at least for now. Christ does offer us healing, but not until we are honest with ourselves.