What one man’s honest, uncensored response to the Eucharist taught me about faith 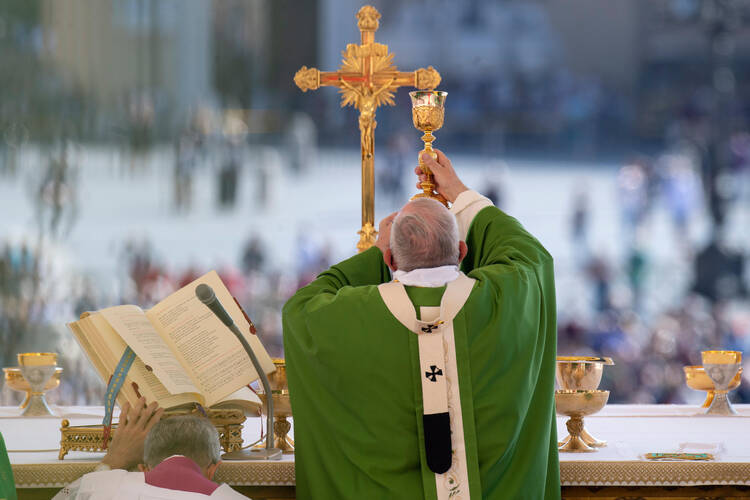 Pope Francis elevates the Eucharist as he celebrates the opening Mass of the Synod of Bishops on young people, the faith and vocational discernment at the Vatican Oct 3. (CNS photo/Vatican Media)

I was sitting in a pew at the welcoming Mass for the new archbishop of Indianapolis. They had pulled out all the stops; the church was decorated with banners and fresh flowers; there was a zealous choir dressed in robes and everyone wore their finest. The diocese wanted to make a good first impression for our new leader. Everything was going as planned.

But then, just as the archbishop recited the eucharistic prayer, something scandalous happened. As he raised the host aloft to the congregation and we all reverently bowed our heads, a man’s voice boomed from the back of the church: “My Lord and my God!” My head shot up in shock, and I might have even audibly gasped at this surprise interjection. You could feel the tension fill the church. That was not supposed to happen. That is not what we say there. Someone had broken ranks, gone off-script. But the archbishop, ignoring the interruption, continued on. He again presented the congregation with Christ, this time in the form of the wine-filled chalice. And again from the back of the church the man called out, “My Lord and my God!”

To this day, I remember how truly shaken I was by this man’s interruption. I was deeply unsettled that he had not fulfilled the social contract of Mass. I thought he was mad, deranged and quite frankly rude to detract from what was happening on the altar—and at the archbishop’s welcome Mass no less. This was not a church where you could shout things out whenever you pleased. This was a Catholic church, and we speak as scripted or not at all.

Like a child who forgets his surroundings, his response was honest and uncensored.

It would not be until years later, while reading the Gospel of John, that I began not only to make peace with this encounter but to cherish it. As Catholics, we believe that Jesus, God our Savior, is truly present in the Eucharist. We are taught that as we consume the earthly host we gain divine communion with our God. Furthermore, while we believe that God is always with us, it is in that moment, as the priest presents the host to the congregation and the bells ring, that God is corporally among us. God is not this hypothetical man in the sky; he is upon the altar mere feet from us. Though the doors are closed, Jesus enters and stands in our midst.

As a congregation, what do we do when presented with our Lord? We avert our eyes. The pope aerobics of Catholicism, embedded so deeply into us through years of repetition, have us bow our heads, and if you were raised more traditionally you may beat your fist against your chest. This physical act prompts the imagery of entering a throne room and kneeling before a king. This greeting of respect and meekness must be taken care of before any further communication with the king is possible. On our knees before the one who made us, the one who rules us, our King enters the room and our response is one of docile submission. Now this is not an incorrect response when faced with the Lord made flesh. For only a few moments later we say; “I am not worthy that you should enter under my roof.” And we are not worthy, not by a long shot.

But Jesus, the Son of God, teaches us to call God “Our Father” and to come to him as children. Children do not fear their father. Children, when presented with their father do not sit still or remain silent. No, they cry out in excitement, in welcome, and run to greet him. As the rest of the congregation, myself included, averted our eyes as our Lord stood in our midst, this man did not look away. He knew exactly what was happening on the altar and, overwhelmed by the sheer ecstasy of seeing his father, he called out: “My Lord and My God.” He was not embarrassed by what others were thinking. He was not hushed or cowed by the glares of his fellow Christians. He saw his father on the altar, and like a child who forgets his surroundings, his response was honest and uncensored. Father, I see you! Father, over here! Father, I am so excited you are here with me! Father, I believe!

The Gospel tells us Thomas finally believed when he was invited to touch Jesus’ hands and side. Jesus tells us, “Blessed are those who have not seen and have believed.” I pridefully judged that man in Indianapolis, but his declaration of faith is one I now silently replicate whenever presented with the Eucharist at Mass. So now I say to you, blessed is that believer who dared to acknowledge his father, who saw Jesus in the wafer and wine. Blessed is that renegade who broke ranks, who refused to simply go through the motions. Blessed is that fellow child of God who shocked me into looking up, so I could see my Lord and my God truly present in the Eucharist. 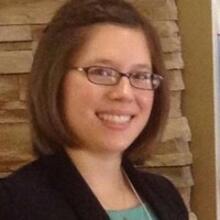 Danielle Vaclavik is a community psychologist and founder of Christian Evaluation, Assessment, and Research Services, which aims to make research and evaluation accessible to Christian ministry organizations.

Danielle, the impact of that man's faith upon your own faith reminds me of theologian John Shea's awakening experience of the reality of the Eucharist. He was an altar boy, serving Benediction, kneeling before the Monstrance for a period of adoration. He was sleepy eyed, more or less putting in the required time. As he looked at the consecrated host in the Monstrance he suddenly felt the thought "I'm more than a piece of bread, you know!" It was startling! As he left the Church that thought came back to him in every thing he looked upon: "I'm more than a tree, you know!"; "I'm more than your classmate, you know!" A true Eucharistic awakening!

Although I completely understand the author's abject shock at the verbal exclamation during the consecration, I wasn't at all surprised at the actual words used by the man who shouted them. When I was a child in Catholic school many decades ago, that was the very prayer we were taught by the nuns to say (silently!) during the exposition of the consecrated host, and again when the chalice is raised. To this day, it is a habit I've never lost. So, was he overenthusiastic? Maybe. But unorthodox? Never! 😊

Totally relate, Teresa. Except while we were taught to say “My Lord and My God” when the host is raised, it was “My Jesus, Mercy” for the chalice.

I was raised in a culturally Catholic but not practicing home. Somewhat on the ly, my Basque great grandmother taught me about the proper "eyaculación" to utter at the raising of the consecrated host (and chalice). In English, "my Lord and my God." It was brought back to me when, as a member of the board of the Jesuit Refugee Service I visited a DHS/CBP/ICE detention center in El Paso. It was Saturday afternoon, and there were two Vigil of Sunday masses, one for men and one for women. In both, when the priest elevated the host, they said in union and out loud and in Spanish, "my Lord and my God." It was pretty emotional for me to see these beautiful brothers and sisters of mine worship our Lord and our God.

I am also old enough to remember saying quietly “my Lord and my God”. I also remember the beating of the breast. I do not recall the terms conservative or liberal being used in those days. I loved hearing of this person’s enthusiastic response to God’s presence.

You can still hear some parishioners exclaim "My Lord and My God" at my parish, especially at daily morning mass. It's a beautiful practice.

I too was taught to say 'My Lord and my God' at the elevation of the host and the chalice - not to say it aloud but silently - I still do when the priest genuflects/or bows and I bow my head.

It is a practice I took up a few years ago when I first read that those words were spoken by Thomas after putting his hands into Jesus's wounds. I thought it was profound, and a great way to acknowledge Christ's real presence in the Eucharist. I agree though, shouting it out loud at mass is not what we as Catholics do. Quietly to ourselves is appropriate. Otherwise, it seems to me, many people will start shouting aloud anything that comes to mind. Not good.