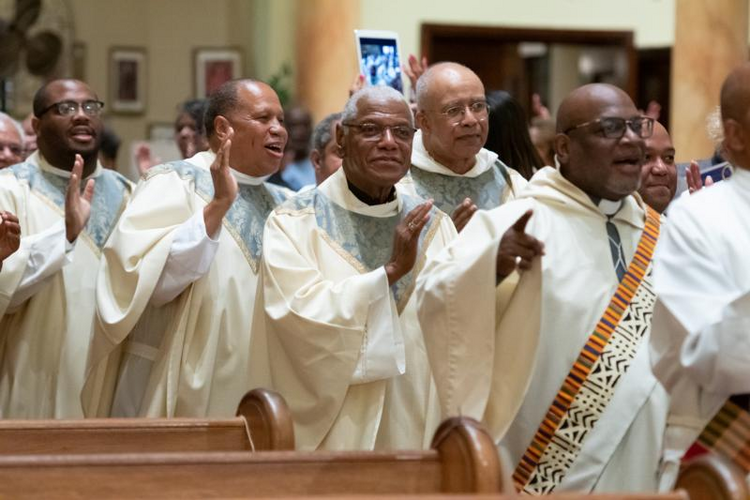 BALTIMORE (CNS) -- The joint conference of the national organizations for black Catholic clergy, women religious, seminarians and deacons finally made its first stop in Baltimore, a city noted for several firsts on the road to equality in the faith.

One of this year's attendees, Sister Beulah Martin, a Sister of the Blessed Sacrament, didn't wait for the formal opening of the July 20-24 gathering to soak up some of that Baltimore history.

Sister Beulah was among the more than 100 priests, deacons, seminarians and religious women from around the nation at a July 22 Mass at Historic St. Francis Xavier, the first black Catholic church in the United States.

It was her 10th day in town, as Sister Beulah had spent her annual retreat at the motherhouse of the Oblate Sisters of Providence, who in 1829 were founded by Mother Mary Lange, a candidate for sainthood, as the first community for sisters of African descent in the U.S.

Sister Beulah's retreat included learning about Mother Lange from Oblate Sister Magdala Marie Gilbert, who is advocating for her cause, and stifling heat reminiscent of her youth in Crowley, Louisiana, during her daily hourlong walk on property that adjoins Patapsco Valley State Park.

"It's only hot if you think about it," said Sister Beulah, who at the 2017 joint conference received the Harriett Tubman Award from the National Black Sisters' Conference. It is given to the sister who has demonstrated service and dedication "as a liberator of African-Americans and/or peoples of the African Diaspora."

As her teaching ministry took her to Birmingham, Alabama, Chicago and now Powhatan, Virginia, where she is launching a pre-school, Sister Beulah has been a regular attendee of the joint conference since making her final vows in 1984.

"I come for the support," she said, "and to gather information about how I can go back to my community and share the good news."

Her kindred spirits at the Mass, which acknowledged jubilarians, included Washington Archbishop Wilton D. Gregory, who presided and made women religious the focus of his closing remarks.

"Our jubilarians had the courage to enter religious life when there were few (minorities in those ranks)," Archbishop Gregory said. "Sisters, you have carried the church on your shoulders."

Concelebrants included Bishop John H. Ricard, the retired bishop of Pensacola-Tallahassee, Florida, and the newly elected superior general of his religious order, the Josephite Fathers, whose roots include serving freed slaves in Baltimore in the 1870s; and Washington Auxiliary Bishop Roy E. Campbell, the president of the NBCCC, who was raised in southern Maryland.

Among others, the National Association of Black Catholic Deacons was represented by its president, Deacon Melvin Tardy, of the Diocese of Fort Wayne-South Bend, Indiana.

Jubilarians were recognized by Sister Roberta Fulton, a Sister of St. Mary of Namur, who is president of the National Black Sisters' Conference. Those honored for 60 years of service were Sister Callista Robinson, of the Franciscan Sisters of Little Falls, Minnesota, and Baltimore's Sister Gloria Rubio, of the Sisters of Christian Community.

Those recognized for 50 years of service included Sister Rita Michelle Proctor, superior general of the Oblate Sisters of Providence. Her cousin, Sister Gwynette Proctor, organized the conference along with Sister Josita Colbert, a fellow Sister of Notre Dame de Namur.

Sister Josita estimates that 80 percent of the women religious at the conference included teaching among their ministries. Sister Gwynette, director of the Office of Black Catholic Ministries for the Archdiocese of Baltimore, noted the impact the jubilarian liturgy had on her discernment.

"When I entered (her order) 39 years ago and attended my first (jubilarian liturgy)," Sister Gwynette said, "I saw our elders, jubilarians, all the members of the organizations, and I experienced God's touch, a shiver went through me. It was at that moment that all uncertainty and doubt left me."

"When I saw faithful women and men, who looked like me, that had been living the call of Jesus for 25 years, 50, 60, 70, some 80 years, I knew I could do it," she told the Catholic Review, the news outlet of the Baltimore Archdiocese.

The homily, in contrast, was delivered by Father Kareem Smith, who was ordained for the Archdiocese of New York in 2018.

"My story is your story," he said. "How many times have you been told, 'You hang in there, you keep pushing.' ... Brothers and sisters, this thing is not about what we have done, but what God is doing."

He addressed the "carnal" nature of the modern world, and the call to live "radically different lives."

"I'm standing on the shoulders of those who have come before us," Father Smith said. "In this troubled world, we have to show up ... ready for the fight.

Dante, Trump and the moral cowardice of the G.O.P.
Charles Sykes

While Father Smith took the train back to Yonkers, New York, to celebrate 6:45 a.m. Mass July 23 for the Annunciation-Our Lady of Fatima community he serves, most joint congress attendees spent the day furthering their knowledge of Baltimore's black history with a bus tour.

That day included a gospel festival, with song from the St. Ambrose Gospel Choir, New All Saints Men's Chorus and the Cardinal Shehan School Choir, which went viral in 2017 with its rendition of "Rise Up." The Shehan choir is led by Kenyatta Hardison, who doubles as choir director at Historic St. Francis Xavier.

The joint congress -- organized under the theme "This Work Is Ours to Do: Send Us" -- concluded with business meetings and an awards dinner July 24.

So happy to see, for once, a truly uplifting article on America, free from the usual radical political agenda, and true to the spirit of Christ’s Church. And it makes me very proud to be a Catholic Baltimorean. Thank you.

Will Nier
1 year 4 months ago

Where any of them Josephites.

Black, brown, yellow and white - all dignified sons and daughters of the same Creator.