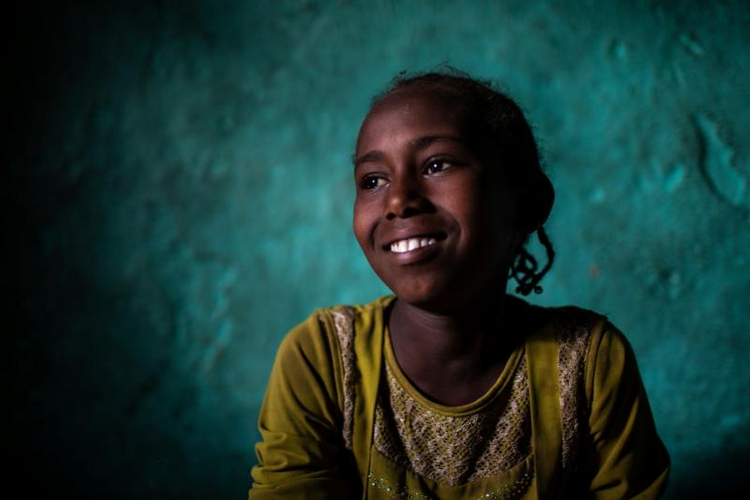 Semria Abdujelile, 9, sits at her family's home in a rural area of Ethiopia's Oromia region Feb. 9, 2019. The church in Ethiopia is leading peace and reconciliation efforts and also working to help the millions of people who have fled their homes after an upsurge in communal violence. (CNS photo/Will Baxter, courtesy CRS)

The Catholic Church in Ethiopia is leading peace and reconciliation efforts while it does what it can to help the millions of people who have fled their homes in an upsurge in communal violence.

Ethiopia's parliament approved the establishment of the commission last December as part of reforms instituted by Prime Minister Abiy Ahmed, who took power in 2018 after his predecessor resigned. Abiy has lifted bans on political parties, released political prisoners, prosecuted officials accused of human rights abuses and embarked on economic reforms.

"The church is in a good position to help and the Catholic leadership is there," Argaw Fantu, regional director for the Catholic Near East Welfare Association, said in a July 15 interview from Addis Ababa, Ethiopia's capital.

At least 2.4 million Ethiopians have been displaced by violence between rival ethnic groups, according to the U.N. Office for the Coordination of Humanitarian Affairs. The Horn of Africa nation has more than 80 different ethnic groups.

"The conflict is widespread," Fantu said, noting that "the church is trying to support people" in many ways, including food distribution.

The violence in the predominantly agricultural country is politically motivated and mostly concerns land and resources, he said.

The purpose of the reconciliation commission is to resolve the intercommunal conflict as well as "to establish peace, including between different interest groups in the political sphere," Fantu said.

Abiy and Eritrean President Isaias Afwerki signed a peace pact last year to bring an end to the two-decade war between the neighboring countries. An estimated 80,000 people are believed to have been killed between 1998 and 2000 during a border conflict. However, after the two countries signed a U.N.-brokered border agreement in 2000, they failed to implement it.

While "it's risky to travel by road" in remote parts of Ethiopia, particularly in areas badly affected by violence, church workers go wherever help is needed, Fantu said.

Catholics account for only 1 percent of Ethiopia's population of 105 million people. Yet, after the government, the Catholic Church is the country's biggest provider of schools.

"We're asked for support in holistic formation for young Catholics" as well as for women religious, Fantu said, noting that the church's work extends to setting up universities, running orphanages and feeding schoolchildren.

Migration of young people in search of better opportunities is a major concern for the church in Ethiopia, Fantu said.

There is "no safe way" to flee to Europe, yet people continue to try extremely dangerous routes, such as through the Sudanese desert, Somalia or Libya, he said.

To help young people, including those who return from unsuccessful attempts to cross borders, the church runs training programs focusing on skills that people can use. This gives people the chance to "stay and build a living for themselves," Fantu said.

Training offered includes tailoring, haircutting and how to run a small business, he said.

Some dioceses have training programs where women learn to run cooperatives, he said, noting that rural women particularly lack opportunities for economic independence.

"Many mothers come to the cities with their children to try to escape" extreme poverty and hardship, Fantu said.

Through church-run savings and loans projects, many people are able to save enough to start their own small businesses, LeAnn Hager of Catholic Relief Services in Ethiopia said in a July 11 interview from Addis Ababa.

Some grow and sell vegetables, while others start up as mechanics, she said, noting that some people choose to use their savings to cover health care costs or school fees.

Often, beneficiaries' neighbors see the success of the savings and loans projects "and spontaneously start up their own, which is exactly what we want," Hager said.

With food distribution, "we look at ways to bring the food as close as possible" to the people who need it, which is particularly difficult in very mountainous areas, she said. Often, the few roads that exist are broken and people have to walk so many miles to collect their food that they sell much of it before they reach home.

"We found a way to transport food by boat" to people in two remote villages, thereby substantially reducing the recipients' burden, Hager said.

In several parts of Ethiopia, food aid is needed because of crop failure caused by drought and flooding, but the rise in conflict as well as illness due to armyworm infestations have also increased the need, she said.