Bishops from Kenya, Uganda and Ethiopia call for disarmament of herders 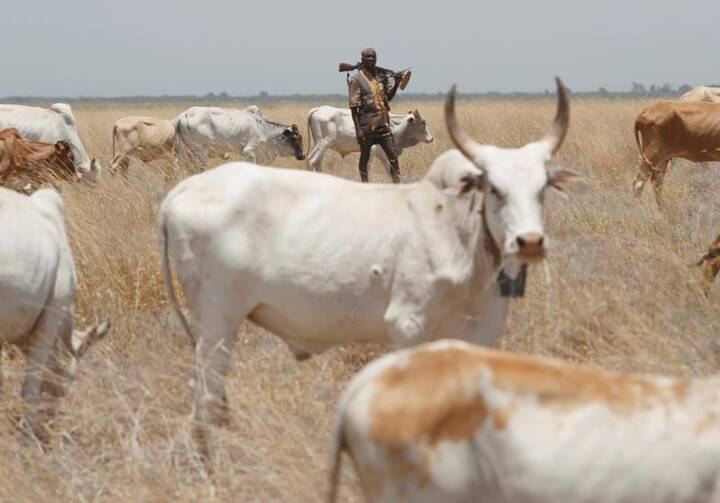 A Turkana warrior patrols with his gun to protect cattle from Dassenach warriors near Todonyang, Kenya, March 21, 2019. Kenyan, Ugandan and Ethiopian bishops are calling for coordinated and peaceful disarmament in a common border region, where an estimated 8 million illegal small and light weapons can be found among the herder communities. (CNS photo/Goran Tomasevic, Reuters)

NAIROBI, Kenya (CNS) -- Catholic leaders in Kenya, Uganda and Ethiopia are calling for coordinated and peaceful disarmament in a common border region, where an estimated 8 million illegal small and light weapons can be found among the herder communities.

The border triangle is the homeland of the Turkana and the Pokot of Kenya, the Karamoja of Uganda, Daasanach of Ethiopia and Toposa of South Sudan, who have for many centuries raided each other's cattle as part of an age-old tradition.

At the same time, the region hosts the highest number of refugees in Africa and contributes to the international forced migration, according to Catholic Church officials.

But the cattle raiding in the recent past has turned deadly partly due to its commercialization and politicization.

This has spurred a demand for AK-47s and other small and light weapons, with the communities racing to arm themselves with a disastrous effect, said Bishop Dominic Kimengich of Lodwar, Kenya.

"Everyone in this region has a gun, but we are telling them that they don't need all these weapons," said Bishop Kimengich in an interview.

He said the cycle of revenge -- cattle raids and counter-raids -- have created a cycle of insecurity in the area, where a rifle costs about $200-$300 or one or two cows. The guns have been easy to get, according to the bishop, since the area is surrounded by countries in conflict.

"One of the sources of the guns is South Sudan, where the local communities sell their guns to buy food," said Bishop Kimengich.

In mid-May, the leaders converged at the St. Teresa Pastoral Center in Lodwar for the interdiocesan conference on cross-border peace and evangelization. This is a Catholic Church initiative launched in 2011.

"Disarmament has to begin now," they said. "Peaceful disarmament begins with the transformation of the individual and disarming the mind and the heart. It can be done in an environment of trust, collaboration and commitment," the leaders said in a statement released after the conference.

They said the proliferation of the arms has caused thousands of deaths and injuries, displacement and forced migration of people; it has hampered development, heightened insecurity and caused the loss of livestock.

The leaders proposed that the regional governments launch a simultaneous disarmament process using an "integrated peaceful disarmament approach." The approach focuses on prevention and control of the small arms and light weapons proliferation, seeks to address reasons creating the demand and seeks to transform all sectors of the community. It also suggests a synchronized disarmament action in the three countries.

"Simultaneous disarmament is critical. When the communities learn it is occurring one area, they hide their weapons in the area where it's not occurring. Uganda, for example, has disarmed its Karamoja, and they are now seeing the Pokot of Kenya as a threat to their security," said Bishop Kimengich.