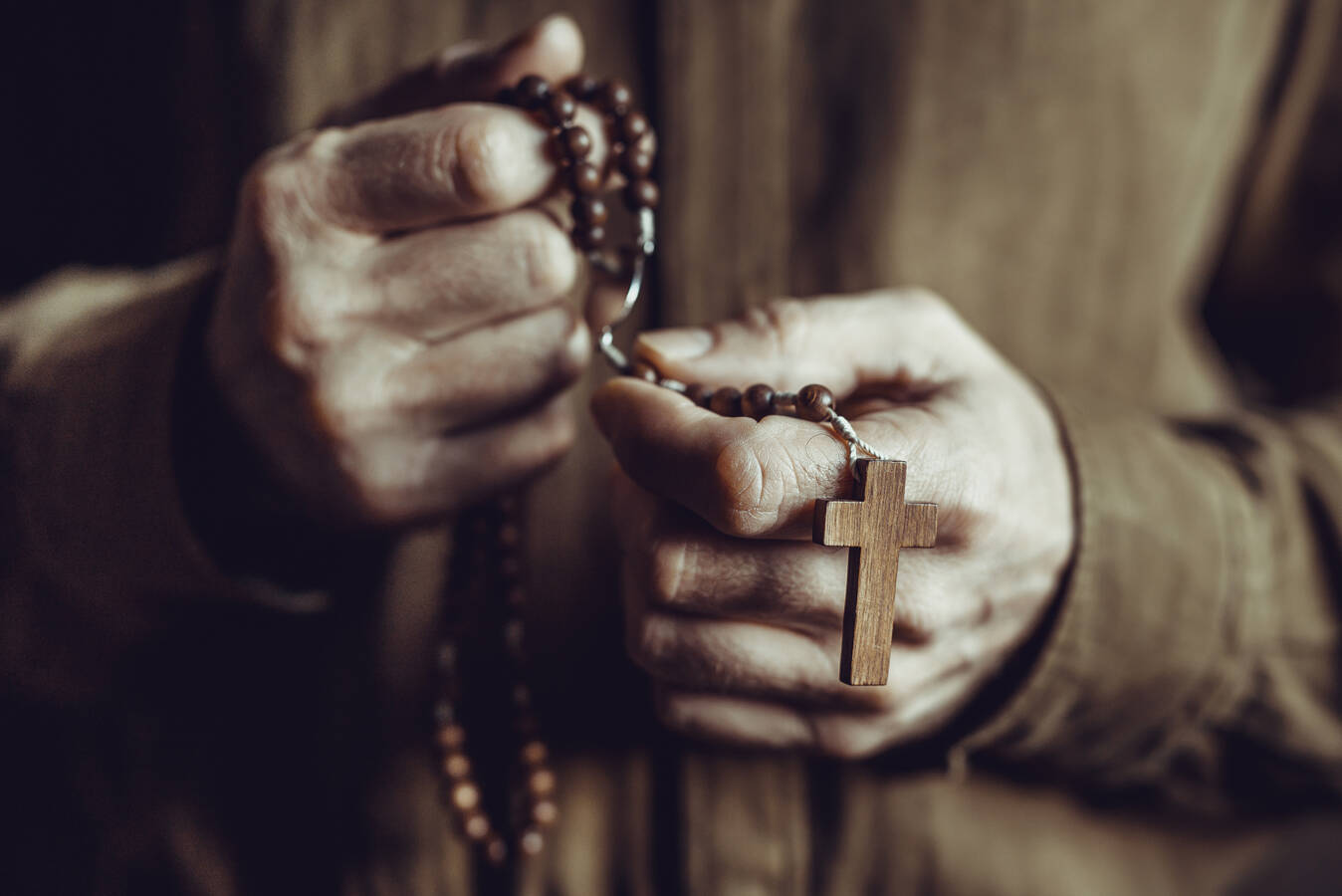 “Be a Monk. For a Month. For a Year.” So says the advertisement for Mepkin Abbey, a Trappist monastery in South Carolina.

It was a call for which I had been waiting, albeit not a call to vocation. I am middle-aged, happily married and the father of six children. Thankfully, the monastic guest program at Mepkin is open to all: those discerning a vocation or not, Catholic or not, men or not.

I have been making five-day retreats at Trappist and Benedictine monasteries for the past 20 years and have found the experience of living in silence and detaching from work and family life restorative and re-energizing. And yet, as the renowned contemplative Paul Hewson (a.k.a. Bono) would put it, I still hadn’t found what I was looking for.

The truth is, I was becoming restless during my monastic stints. I sensed that I was just scratching the surface of the monastic experience and that as a mere visitor to an abbey guest house, I was still on the outside looking in.

I am middle-aged, happily married and the father of six children. Thankfully, the monastic guest program at Mepkin is open to all.

So I decided to be a monk for a month.

I arrived at Mepkin Abbey on a July afternoon during a South Carolina monsoon. The monastery sits on a bluff above the Cooper River, its 3,200 acres a patchwork of pine forest and vast lawns punctuated by ancient oaks that drip with Spanish moss. The property was originally a colonial rice plantation, later acquired by Clare Boothe Luce, who in turn donated the grounds to the Trappists in the 1940s.

I reported to the retreat house, a gleaming glass and steel half-cloister that is the most recent addition to the abbey’s modern buildings. Gerard Jonas Palmares, O.C.S.O., the director of the monastic guest program, greeted me as though I were a long-lost relative.

During my month-long monastic immersion, I lived in a small, comfortable room in the monks’ dormitory. I wore an unflattering, hoodie-like habit. I ate my meals quickly and in silence. I joined the monks in chanting psalms during the seven offices of the Liturgy of the Hours, the first of which, Vigils, kicks off at 3:20 a.m. I worked for four or five hours a day in the abbey’s mushroom-growing operation. I spent each day in silence, speaking only when necessary and not at all during the Grand Silence from 8 p.m. to 8 a.m. I loved it.

Every sunrise and sunset, a sign of God’s presence. Each passing nod by a fellow resident, a further embrace into the community. I wondered whether I had missed my calling.

During my first couple of weeks at the monastery, I felt immense gratitude nearly every day and nearly every hour of every day. I felt privileged to reside in such a beautiful place, to live in silence and to brush against the gentle disposition, intelligence and wisdom of the monks. Every sunrise and sunset, a sign of God’s presence. The horn of a freight train blaring from across the Cooper River, a temporary reminder of the noise and distractions of the outside world. Each passing nod by a fellow resident, a further embrace into the community. I wondered whether I had missed my calling.

But during my third week at Mepkin, I hit the monastic wall. I started counting the days until my departure. Father Gerard Jonas was unsurprised and confided that the monastic guest program lasts for one month for a good reason: A would-be monk should understand that the life can be monotonous. I was able to muddle through this dry spell, as I assume that all monks must do for various stretches of time, and the latter part of my stay at the monastery was replete with blessings.

Those blessings included daily Mass, which at Mepkin Abbey begins at 6:30 a.m. The liturgies at Mepkin are short and simple, the homilies concise and incisive. Nonetheless, Mass at the abbey packs an emotional wallop. I am not prone to strong sentiment, and yet I nearly broke into tears during several Masses during my month at Mepkin. I hoped that none of the monks noticed, but if they did, that’s O.K., too. And while we’re in the confessional, I should fess up, as I did to Father Guerric, that I had dozed off a couple of times during the centering prayer session that he hosts at 5 a.m. each day. I learned that this failing is pardonable because, as Father Guerric told me, I did not snore and “it happens.”

Father Guerric granted that indulgence during one of our conferences, at which I was reminded that if you meet with a Mepkin monk to discuss what is going on in your life, spiritual or otherwise, you will leave the meeting with a book. After a few such conferences, the books started piling up on my desk. The problem was that I never had the time to read them. Throughout my tenure at the abbey, it always felt as though there was somewhere that I was supposed to be, and something that I should be doing there. So I made the rookie mistake of waving off further book recommendations. Eventually, I recognized my error and came to appreciate that a book recommendation from a Trappist monk is a precious gift, something that the monk believes or perhaps knows will help you on the journey. Now the books suggested by the monks are helping to change my life.

A book recommendation from a Trappist monk is a precious gift, something that the monk believes or perhaps knows will help you on the journey.

And, of course, things in my life need to change. For example, there is a person in my workplace who, a decade ago, saw to it that I suffered more than necessary from a Hobbesian Wall Street reorganization. I needed to find a way to forgive this person after all these years, and my month at Mepkin seemed like a good opportunity to cross this problem off my spiritual to-do list. So I asked Father Columba, formerly a parish priest in Dublin, whether I could discuss an unspecified “pastoral issue” with him. Father Columba readily agreed, but before we got together, he delivered an amazing homily on Mt 18:21-22, in which his theme was that “forgiveness is a miracle.” Father Columba and I still had our talk, but forgiveness was not one of the topics that we discussed. I had already heard what I needed to hear.

A Catholic guide to your mid-life calling
John W. Miller

The miracle of forgiveness also showed up unexpectedly at the monastery. During my month at Mepkin, there were two fractious incidents between monastic inhabitants. Naturally, I was involved in one of them. One of the monks had suggested that I was not cleaning the mushroom logs properly, and because I am perfect in every way—not to mention stubborn—I gave him the cold shoulder. I felt incredibly sheepish when the monk on the other side of this contretemps sought me out to apologize within a half-hour. If you want to know how the monks manage to live peaceably in community, day after day after day, there is your answer.

I went to Mepkin Abbey with three objectives: to improve my prayer practice; to experience a full immersion into the daily life of a monk; and to begin a discernment about the next phase of my life. I ended up making so much progress on those three goals during my month at Mepkin that I wonder whether I should have included another three—or 10.

Fortunately, there will be time for that, as the monks invite anyone who has completed the month-long program to return to the abbey at any time for a shorter stay. Just what I wanted: more opportunities to be a monk. 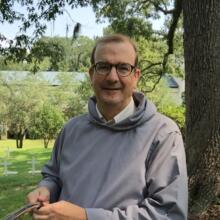 Stephen B. Grant is a graduate of Gonzaga College High School and the University of Virginia and its law school. He works as a securities lawyer for a bank in New York City. Stephen, his wife Dina and the youngest of their six children live in Bronxville, N.Y. Stephen and Dina have made pilgrimages with America Media to Ignatian Spain and the Holy Land.

Does this man's wife have a similar opportunity to take a month off? I hope so. Parenting six children is a monumental task. Having a month off from parental responsibilities is a great luxury which I hope is afforded equally to both partners.

Good point. Perhaps he should have addressed that. Even weekend retreats (2 and 1/2 days) with 3 kids and the wife at home invoke guilt. I can't imagine a month with 7 at home. Still, good article. I would like to do one of these (when the kids are grown).

Yes, Karen you missed it. It says he lives with his wife and their youngest child. They only have one child left at home.
I greatly enjoyed this article, I have been to Mepkin several times and had a wonderful experience each time. The grounds are gorgeous, the monks are welcoming and the liturgies are simple but reverent. This article planted in me a desire to go again.
I do not understand why people read an article in which the author shares something personal of his spiritual life and experience, and people have a need to respond with criticism. And I doubt you need to tell him that parenting six children is a monumental task. I highly suspect he has learned that for himself.
Stephen, thank you for sharing your experiences with us.