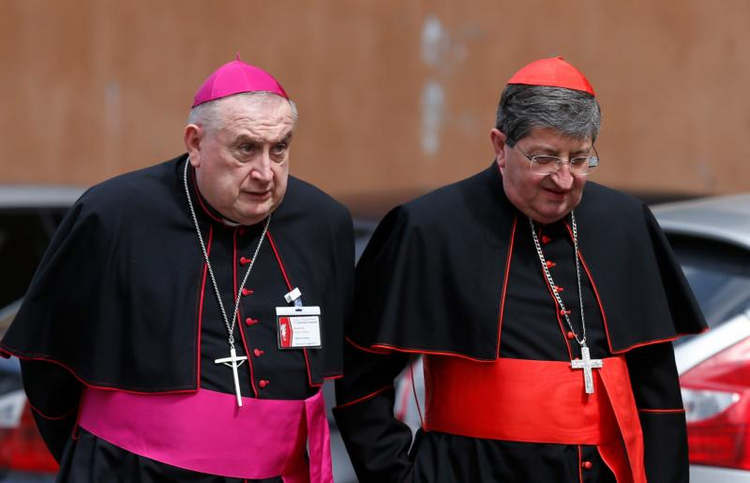 Bishop Franco Giulio Brambilla of Novara, Italy, and Cardinal Giuseppe Betori of Florence arrive for the opening of the annual spring meeting of the Italian bishops' conference at the Vatican May 20, 2019. Members of the Italian bishops' conference have approved updated guidelines for protecting children and vulnerable adults and for handling abuse allegations. (CNS photo/Paul Haring)

VATICAN CITY (CNS) -- Italian bishops have recognized their "moral obligation" to report allegations of clerical sexual abuse to the police, said the head of the Italian bishops' child protection committee.

Members of the Italian bishops' conference, meeting at the Vatican May 20-23, approved updated guidelines for protecting children and vulnerable adults and for handling abuse allegations.

The guidelines, which will be published only after the inclusion of amendments and clarifications requested during the meeting, suggest dioceses conduct an initial investigation of allegations and contact police if the investigation shows a likelihood that abuse took place.

Under Italian law, church authorities have no legal obligation to report suspected cases of abuse, Archbishop Lorenzo Ghizzoni of Ravenna-Cervia, president of the bishops' committee for safeguarding minors, told reporters May 23. However, he said, "we have decided to commit ourselves to a moral obligation."

Updating rules originally adopted in 2014, Archbishop Ghizzoni said, the bishops will continue to respect the wishes of victims who do not want their cases reported to police, but now they will ask the victims to put their wishes in writing.

The bishops' formal press statement describing the updated abuse norms spoke not of an obligation to report cases, but of "collaboration with civil authorities in seeking the truth and reestablishing justice."

The guidelines, the statement said, were developed around several key principles, including "a renewal of the church that places the care and protection of the little ones and the vulnerable at its center as supreme values to safeguard."

Listening to victims, exercising greater care in admitting candidates to the priesthood and religious life and providing more training to church workers also are part of the new norms, the statement said.

The bishops, it said, also promise to work toward "transparency, supported through correct information, careful to avoid manipulation and partiality."

Here is an additional post on this topic. Read it!