Polish bishops apologize for abuse: ‘No words to express our shame’

Polish bishops apologize for abuse: ‘No words to express our shame’ 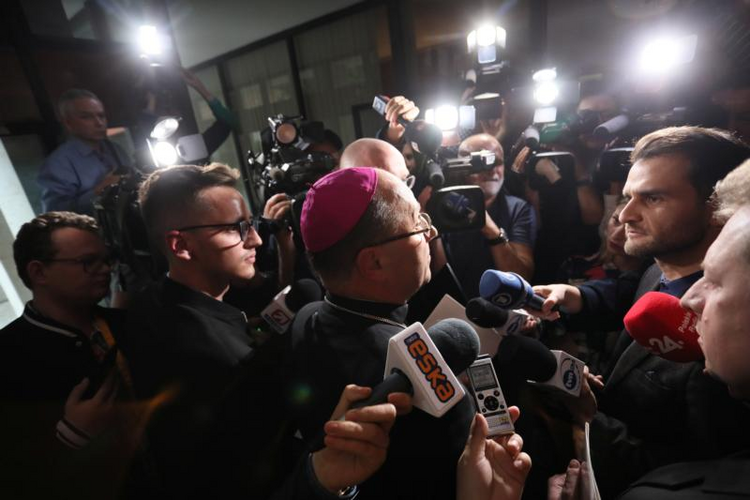 Polish Archbishop Wojciech Polak of Gniezno speaks during a news conference in Warsaw May 22, 2019, after bishops met to discuss steps the Catholic Church will take to tackle the problem of clergy sex abuse. (CNS photo/Agencja Gazeta, Slawomir Kaminski via Reuters)

The meeting came amid outrage over a two-hour documentary, "Just Don't Tell Anyone," that included drastic accounts of cover-up of clerical sex abuse in Poland. The film had more than 19 million views within six days of its May 11 YouTube posting.

"The whole church community in Poland has been shaken by the latest painful information -- these crimes have caused deep suffering for harmed people," the bishops said in a pastoral letter to be read in parishes nationwide May 26.

"There are no words to express our shame at the sexual scandals clergy have participated in. They are a source of great evil and demand total condemnation, as well as severe consequences for the criminals and for those who concealed such acts."

The bishops said they had been "deeply affected" by "shocking testimonies" in the film, as well as by its portrayal of a "lack of sympathy, sinful neglect and myopia" shown toward abuse victims.

It added that Catholic clergy and laity now had to act together in support of victims and to "rebuild trust in priests and bishops" in Poland.

"Everyone with any sensitivity, hearing of the fate of these harmed people, will feel pain, emotion and sadness toward their suffering, and we thank all those who have had the courage to speak about it," the bishops said.

"We admit that, as pastors of the church, we did not do everything to prevent this hurt. For many faithful, especially young people sincerely seeking God, sexual scandals involving clergy have been a heavy challenge to faith and a cause of terrible outrage."

The two-hour film, made with internet fundraising by investigative journalist Tomasz Sekielski, was the first that graphically detailed the cover-up of sexual abuse in the Polish church and follows a cinema drama on church corruption, "Kler" (Clergy), which broke box-office records last fall.

Besides alleging prevalent child sexual abuse, it shows the evasive behavior of perpetrators when confronted by victims and links abuse with secretive church structures and procedures.

The film, which makes accusations against Father Franciszek Cybula, personal chaplain to former President Lech Walesa, also accuses several bishops and archbishops of concealing abusive clergy from law enforcement and says priests continued working with children and celebrating Mass despite being sentenced for abuse and defrocked by the church.

Speaking in mid-May, Sekielski said he was negotiating with Netflix to distribute the film, which has since been broadcast on two Polish TV channels. He also said he was considering a whole documentary series.

Archbishop Slawoj Glodz of Gdansk, who was accused in the film of concealing abuse, apologized May 15 but faced resignation calls from local clergy after telling a TV journalist he had "other things to do than watch such garbage."

In a May 20 statement, the bishops' conference rejected demands from some politicians for criminal investigations against church leaders for withholding information from prosecutors.

However, calls for implicated bishops to step down have come from prominent clergy, including Msgr. Andrzej Szostek, former rector of the Catholic University of Lublin, who told the TVN channel the whole bishops' conference should offer its resignation to the pope, in line with the example of Chile's bishops in May 2018. Some Catholics said they would boycott Masses by prelates implicated in the documentary.

On May 21, the Gazeta Wyborcza daily reported police had intervened to prevent the film being screened by protesters on the wall of Krakow's Wawel Cathedral.

The Vatican's nuncio to Poland, Archbishop Salvatore Pennacchio, said May 17 Pope Francis, who met Polish abuse victims in Rome Feb. 20, had pledged his "closeness and solidarity" after being informed about the film.

All 43 Polish dioceses currently have child protection officers, with more than 3,000 clergy trained in prevention and help for victims.

In March, the bishops' conference published its first report on offenses, listing accusations against 382 priests, involving 625 minors, between 1990 and 2018.

The report said 44 percent had been investigated by state prosecutors, with around half resulting in convictions, although only a quarter of cases had resulted in the defrocking of perpetrators and only a small fraction in damages for victims.

However, in a February report, the "Do Not Be Afraid" victims foundation accused 24 serving and retired bishops and archbishops of covering up crimes and allowing convicted priests to continue parish work. The report listed 85 convicted priests in a "map of clerical abuse," and said Poland's bishops had violated secular regulations and canon law in handling abuse and denying help to survivors.