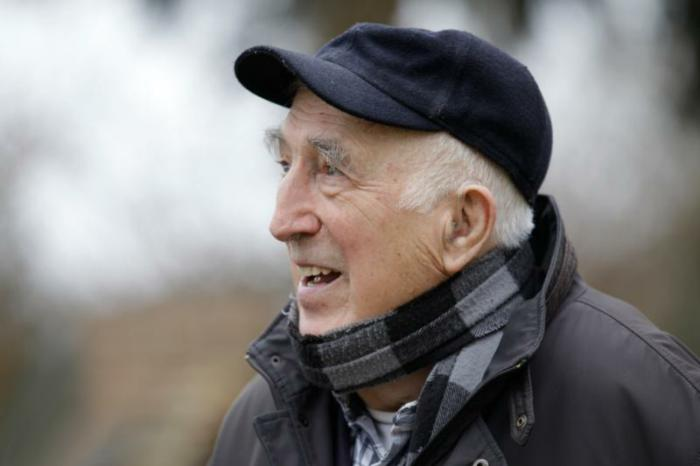 TROSLY-BREUIL, France (CNS) -- Gathered in a makeshift chapel around a simple pine casket, members of L'Arche communities and Faith and Light groups from around the world mourned the passing of Jean Vanier and celebrated his life, his wisdom, his holiness and humanity.

In a message read at Vanier's funeral May 16, Pope Francis prayed that the L'Arche communities around the world would "continue to be places of celebration and forgiveness, compassion and joy, demonstrating that everyone, no matter his or her disability, is loved by God and called to participate in a world of brotherhood, justice and peace."

During the offertory procession, a little Noah's ark was set on the casket, honoring the name Vanier chose in 1964 when he formed a home with two men with intellectual disabilities, launching a movement that would grow to 154 communities in 38 countries.

A large bowl of oranges -- and orange peels -- also was carried forward. Vanier was known to toss peels to or at community members at the end of a meal. Although subdued in the context of a Mass, peels from the bowl were tossed into the congregation, eliciting laughter and applause.

Archbishop Pierre d'Ornellas of Rennes presided over the funeral Mass. The concelebrants included Archbishop Vincenzo Paglia, president of the Pontifical Academy for Life, and Ukrainian Archbishop Borys Gudziak, who will be installed as head of the Archeparchy of Philadelphia in June.

For his funeral Mass, Vanier had chosen the Gospel reading of Jesus washing his disciples' feet.

Bending down to wash his disciples' feet, "Jesus makes himself weak before us," Archbishop d'Ornellas said. "To touch our hearts and heal them, he uses no other means but presenting himself as weak, as the least of the servants."

"Through his weakness, he washes our hearts, which are hardened by pride and barricaded in power, security and the certainty of being right," the archbishop said. "He is 'master and lord,' but he lowered himself out of love. He is 'master' because of his tenderness and unending forgiveness, which raises us up and sets us back on our feet with trust and joy."

Vanier, he said, was a "herald" of Jesus' love, humility and service.