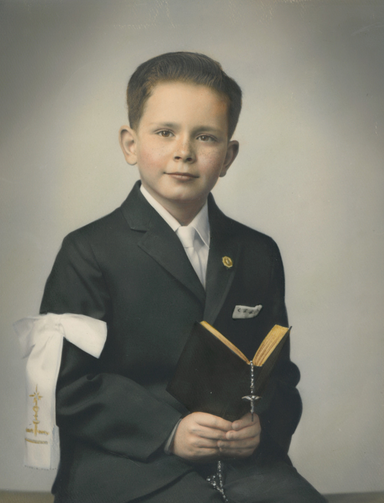 Joseph McAuley, on the occasion of his First Holy Communion, Saturday, April 19, 1969

Some three months before Neil Armstrong stepped off the ladder of the lunar module and left his footprints upon the surface of the moon in July, 1969, and uttered those immortal words about it being but “one small step for man” and yet “a giant leap for mankind,” a young, brown-haired, freckle-faced boy in the northwest Bronx had not a few momentous steps of his own to make: With hands clasped in front of him, he slowly, quietly, shyly and solemnly made his way up the aisle of St. Nicholas of Tolentine—his parish church—to kneel at the altar rail. And once there, he came to an encounter with the God of all—the very Creator who made the heavens and the Earth, the moon and the stars. It was a day a long time in preparation, this First Holy Communion. It was a day that formed a conscience and imparted a gentle spirit upon an impressionable heart.

So many hours went into that day; just as Neil Armstrong and his fellow astronauts had to prepare, so too had the young boy. Learning how to be a communicant required many hours of instruction and not a few prayers. Though he had seen the inside of a church and participated—as he was able—in the Mass that he attended with his parents, he had to learn how to formally comport himself for what he was about to experience. Until that time, his involvement with his faith as a toddler consisted of contentedly sitting on the kneeler in the pews in the back of the church, paging his way through a prayer book with colorful pictures that his mother gave him to keep him occupied and quiet—things which his mother really didn't need to worry about, since he already took to anything with words and pictures; and he was given to being quiet, anyway.

And his father did his part, too: Every time he took him out to the park to play, he made sure to first take his son for a visit to the church to visit a side altar dedicated to a particular saint and have him light a votive candle after placing an offering in the slot underneath and saying a prayer for a special intention. Little did the father know that by that simple act, he would ingrain in his son a lifetime habit of always “lighting a candle” whenever he found himself in the embracing confines of a church. And before the visit to the church was done, he also gave him a little money to purchase any one of the devotional books or booklets that filled the church’s literature rack. Thus, another lifetime habit—reading!

As the church had decreed since the days of Pope St. Pius X, children “at the age of reason”—that is, the age of seven—were to formally begin their sacramental lives by receiving Jesus in the Eucharist. Since children were, of course, already baptized after birth, the next important sacrament after baptism and before Communion was the one known as the Sacrament of Penance.

For a seven-year-old, the Sacrament of Penance was almost incomprehensible—like long division in math class, but just as necessary to proceed to a better understanding of things.

For young, impressionable children, this was a challenge: in confession—as it was always colloquially known—we were to admit before the priest/confessor our imperfections, our faults, our sins. For a seven-year-old, this was almost incomprehensible—and somewhat unfathomable—like long division in math class, but just as necessary to proceed to a better understanding of things. All had to learn the mechanics of making a proper confession, along with the prescribed ritual prayer of repentance known as the "Act of Contrition." An everlasting memory was imbedded in the boy with the image of his second-grade teacher, Mrs. Carroll, writing the beginning words “O My God” in chalk on the blackboard, in large, fine, cursive script—the start of many prayers to be remembered and recited through intervening years.

Once that was learned, the formality of making first confession was the next event. It had to occur in the confessional box, which, to this timid boy, was an impregnable fortress of darkened terror, encased with heavy, purple (or red) curtains. Ever the good catechist, his mother took it upon herself to arrange a “run-through” practice session. So early one Saturday afternoon, with her sitting in the place where the priest would sit, the boy’s mother guided her son through the motions. In time, he would become accustomed to what his mother called “God’s holy dark” and whenever he entered that “box,” he was greatly relieved when he remembered what he had to say, all before he was able to push back the curtain and be grateful for his “parole” from the prison of his sins. And many years later, as he recalled that rehearsal, he wondered what would have happened if the priest with his breviary happened to come upon his mother sitting in his seat!

As to the reception of communion itself, to learn how to receive properly took many practice sessions with ‘Nilla wafers (to approximate what receiving communion was to be like); let it lie on the tongue and dissolve before swallowing whole. In those days, when you received, you did not chew, bite or chomp the host. It wasn’t considered respectful. Plus, when you received from the hands of the priest, an altar boy held a golden paten under your chin to catch a wayward host if it didn’t make it onto your stretched-out tongue. And come to think of it now, that was probably the only time in a kid’s life when you could stick your tongue at an adult and get away with it!

And so the day came. Dressed in a navy blue suit (with a gold-silk lining), a clip-on white tie, First Communion pin in the lapel and his first-ever handkerchief with a white armband with gold lettering declaring to all to see what day it was, he made his way to the altar rail. The moment was over in an instant. A day of celebration with family followed, of course: a meal, cake and ice cream, presents and plenty of pictures. A moment of ecstasy, and then back to the reality of seven-year-old existence. And for 50 years afterwards, plenty of memories.

It is now 50 years in the past, but truth to tell, it is still present. And that little, timid, freckled-faced boy was—if you hadn’t already guessed it—me. It seemed like yesterday—in fact, it was yesterday, in terms of my faith life. And I do not remember the actual moment of my First Communion. I often think how we forget the import of it; how important it was and is. Perhaps being a born-and-bred Catholic can lead some to taking it all for granted? And sometimes, it takes the catechumens of the Easter Vigil to help reignite those feelings of awe of God in us to us. I do recall that nearly mystical feeling of knowing that God was becoming present to me, a most amazing thing to contemplate. But things of the mundane intruded into that First Communion Day, too: The thing that really stood out that day was the weather—it was gray, somewhat overcast and a not a little threatening. Before the day was done, however, the heavens blessed everyone with rain, and me—umbrellaless—with my brand-new blue suit, was thoroughly soaked.

I remind myself of what is constant—the Alpha and the Omega—of our faith, of my faith, simple as it may seem at times, frail as it can be oftentimes, but always hopeful all the time.

This Good Friday of 2019 will be the actual 50th anniversary of my First Holy Communion. In retrospect, Good Friday will be an appropriate day to have such an anniversary, for it is a day of memory (and memories), and to remember what He said the night before: “Do this in remembrance of me.” On Good Friday, I will remember with gratitude that encounter with God all those years ago and ever since; the encounters with everyone I have ever met, those who have been kind and those who have been not, and the lessons they have all taught me, positive and not.

Those 50 years since my First Holy Communion—on April 19, 1969—have brought back many memories. They have been memories of consolation for me—for after all, Communion is consolation—and something which I depend on every time I go to receive. There have been many changes in our church, much that has been good and not a few that have been cause for sorrow. There is still a part of me that still misses that altar rail, and I am often nonplussed when I witness the seeming nonchalance that some people have when queuing up to the front of the altar in order to receive, not appreciating the significance of the moment. After all these years, my First Communion photograph, taken in a studio on Fordham Road, still stares back at me, with my brown-green eyes looking outward, with a face full of serene hopefulness. (And the brown hair my mother carefully combed with what could now be described as a Reaganesque pompadour!)

But as I get older, I remind myself of what is constant—the Alpha and the Omega—of our faith, of my faith, simple as it may seem at times, frail as it can be oftentimes, but always hopeful all the time, of the promise that is contained in that tabernacle. And to that, I can only bow my head and say a heartfelt “Amen.”

I do not quibble with memories of first communion and all the led up to it. I would rather recite my own experience.

Through my wife's experience as an extraordinary Eucharistic mininister (EM) , I became one. It is a ministry of its own, one that I would recommend to anyone. One Easter season I began to think about what I was doing, and realized that I was offering Jesus to every person coming before me in all His presence.. The experience of that revelation became what Evangelicals would call a rebirth, born again. It was an emotional experience of permanent memory. It was a Communion experience much deeper than my own First Communion, but one to which anyone can aspire.

Thanks for this reflection. I received my First Communion the same year. I love this in particular, as I am a catechist. Even now, a few weeks before their First Eucharist, I rejoice for their beautiful little souls!