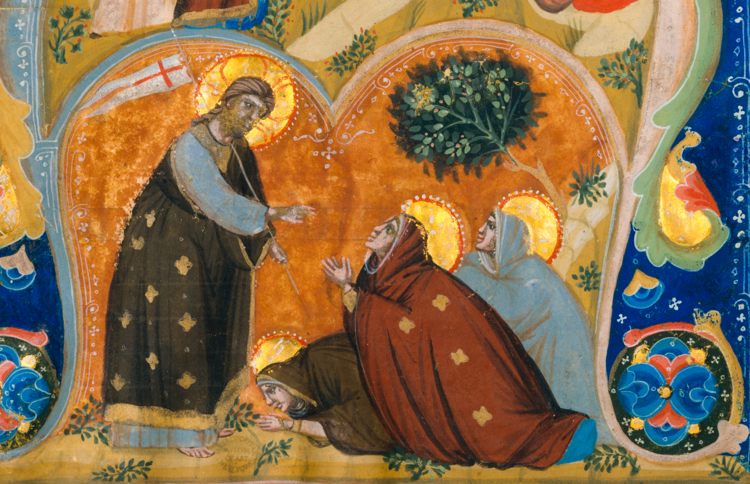 Detail of Manuscript Illumination with Scenes of Easter in an Initial A, from an Antiphonary,ca. 1320 (Met Museum).

I’m not sure about you, but my entire faith rests on Easter. That’s a pretty big statement, I know, so let me unpack it. As I see it, Easter changes everything. Just think about the state of the disciples immediately after the Crucifixion. Think about what they were feeling. Their leader, their hero, their friend had been executed in most public, gruesome and shameful way imaginable. Most of them, except for a handful of faithful women, had abandoned Jesus after his arrest and trial. By the evening of Good Friday, they were cowering behind closed doors, worried that they too would be rounded up by the Roman soldiers, maybe the same ones who had killed Jesus.

But then, on Easter Sunday, everything changes. He is risen! The most dramatic turnabout in history. And to whom does he show himself first? Another surprise! Not to Peter, the putative leader of the apostles, but to Mary Magdalene. And remember, in the time between when Mary Magdalene encounters the Risen Christ and when she announces the news of his resurrection to the others, she is the church on earth. Because only she understands the Paschal Mystery. And what is her message to the disciples? He is risen, yes. But also: Love is stronger than hate. Hope is stronger than despair. Life is stronger than death. And nothing, nothing, is impossible with God. Happy Easter.